When I was sweet sixteen
I was the jukebox queen
Down in Devil Gate Drive
I led the angel pack on the road to sin
Knock down the gates!
Let me in. Let me in!
— Suzi Quatro, "Devil Gate Drive"

When Suzi Quatro was five years old, she saw Elvis Presley perform "Don't Be Cruel" on The Ed Sullivan Show, and said: "I had my first light bulb moment ... I am going to do that." Years later, for her first photo shoot to promote her band, she wanted to wear a head to toe black leather suit, just like Elvis wore in his 1968 comeback special. The costume designer's concept was "Barbarella." But Quatro was thinking: "Elvis." It's interesting to consider this moment in terms of its symbolic significance. A woman in black leather has a certain connotation (Barbarella), and a man in black leather has another (Elvis). Suzi Quatro's entire career as a rock star could be viewed, then, as holding up a middle finger to that perceived difference. Barbarella is fine, but not if you want to be a rock star, and Suzi Quatro always—always—wanted to be a rock star. Liam Firmager's documentary "Suzi Q" is a portrait of Quatro's journey and her influence on the generations that came after. Most importantly, it is a history lesson for those who may not be aware of Quatro. As Joan Jett, one of the many people interviewed, says, "[Suzi] really should be one of those people who should be much more discussed, much more in the lexicon of musicians—especially being so early."

Being "early" is a blessing and a curse. A decade after Quatro's heyday in the 1970s, you could see her influence everywhere, in the Go-Go's, in Joan Jett, in Chrissy Hynde, but her influences absorbed her so completely that Quatro herself vanished. She was there first, it's just that the world wasn't quite ready for her yet.

Quatro grew up in a tight-knit Catholic family in Detroit. She and her sisters formed a band when they were teenagers called The Pleasure Seekers. Quatro, age 14, played a bass guitar almost larger than her body. All of the sisters were ambitious, but this was a family venture, and so when famed producer Mickey Most caught their act, and plucked Suzy out for a solo deal, it caused a rift in the family which seems to have never fully healed. Most flew the teenager to London, but didn't quite know what to do with her. She wasn't just a "girl singer" in front of a band. She was a "girl singer who played bass" and although there were precedents (Sister Rosetta Tharpe being the most obvious example), in the 1970s it didn't exist, at least not in rock 'n roll. Eventually, bored with waiting for something to happen, Quatro formed a band, and "Can the Can"—her second single, written by Mike Chapman and Nicky Chinn specifically to highlight her bass playing—reached #1 all over Europe and in Australia. She was a tiny girl in black leather playing a huge bass, with three hulking guys behind her, and the effect was electric. In her memoir Unzipped, Quatro writes, "My first appearance on 'Top Of The Pops' was like a shot of pure adrenaline. I stared into the camera, screaming, hair flying, a lone girl in leather with three heavy-looking 'hooligans' backing me. It was a huge shock for the audience. No one had seen a female performer like this before."

More hits followed, with “48 Crash,” “Devil Gate Drive,” "The Wild One," “Daytona Demon,” “Your Mama Won’t Like Me.” None of these songs date at all. They still sound like hits today.

What's most fascinating about this documentary—including the interviews with Quatro, who is intelligent, clear-sighted, and vulnerable—is listening to the comments from the people Quatro inspired. It's a legendary bunch: Joan Jett, Debbie Harry, Kathy Valentine of the Go Go's, Donita Sparks of L7, Lita Ford of The Runaways, Tina Weymouth of the Talking Heads. Lita Ford says she couldn't believe "all that thunder [was] coming out of this little girl." Joan Jett had the poster of Suzi Quatro in black-leather on her bedroom wall, saying, "She was integral to me finding out who I was." Kathy Valentine remembers hearing "Can the Can" for the first time: "My brain literally exploded." John Norwood Fisher provides some essential insights in his interview, remarking: "Maybe girls were trained to not aspire to these things. It takes a Suzi Quatro to come along and say 'This is possible.'" Alice Cooper, who had Quatro open for him, says flat out, "Suzi was an innovator."

The response to Quatro was often mixed. Nobody knew how to categorize her. She was greeted like The Beatles in Australia, but she had a hard time charting in the United States. The British press was at times hostile and/or condescending, one headline declaring Quatro a "Sexist Tool of Male Chauvinism." (That a woman would choose to wear sexy leather because she liked it and because it was an homage to Elvis did not compute. Someone had to have forced her!) Quatro was a "tough chick," self-described, but the sexism she experienced was often appalling (there's a clip of a talk show host smacking her on the butt). She became known to American audiences mostly from a small recurring role on Happy Days as "Leather Tuscadero," where she was basically "the female Fonz" (this is actually a perfect way to describe her). After those first years with #1 hits all over the world, things fizzled out. Quatro continued working. Her career has been very eclectic. She writes poetry. She wrote a musical about Tallulah Bankhead. She still tours, drawing huge crowds. But ... what happened?

"Suzi Q" doesn't interrogate that question as much as it should. More time is spent exploring the Quatro family's wounds from Suzi de-camping for a solo career, which just isn't all that interesting. If the world wasn't ready for Suzi Quatro, then what exactly wasn't it ready for? It was ready for Joan Jett so soon afterwards, but Jett got pushback too. One of the reasons why the "grunge era" was so thrilling was because you had "girl bands" like Sleater-Kinney, Babes in Toyland, Bikini Kill, Hole, and L7 roaring out of the radio, not just strumming their guitars, but plugging them in and shredding them. Listen to L7's "Wargasm," an absolutely rager. You can hear Suzi Quatro's influence: play harder, play louder, sing rougher, scream higher. It's rock 'n roll.

Like Joan Jett says: Suzi Quatro really "should be much more discussed." Hopefully "Suzi Q" will start that long-overdue conversation.

Now available on VOD and DVD. 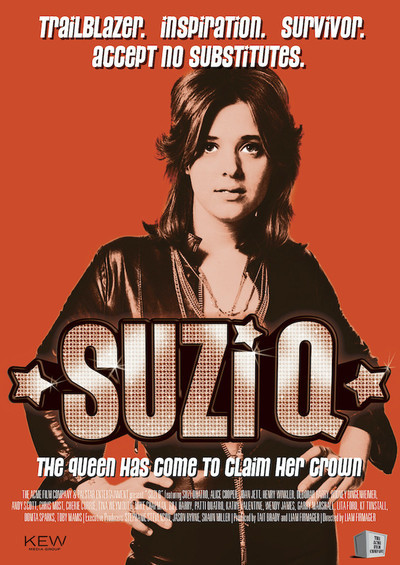 Suzi Quatro as Herself

Debbie Harry as Herself

Tina Weymouth as Herself

Joan Jett as Herself

Cherie Currie as Herself

Henry Winkler as Himself

KT Tunstall as Herself

Mike Chapman as Himself