The opening sequence of Dario Argento’s “Dark Glasses,” his first movie in nearly a decade, is a piece of filmmaking so strange, eerie, and mesmerizing that it raises hopes that Argento has at last shaken off the torpor of mediocre recent works as “The Card Player,” “Giallo,” and “Dracula 3-D” and made a film worthy of the man behind such classics as “Deep Red,” “Suspiria,” and “Tenebrae.” In it, a woman is driving along until she pulls over near a park and joins a small crowd that has gathered to observe a solar eclipse. Nothing overtly horrific happens during this sequence—certainly none of the elaborately stylized gruesomeness synonymous with the Argento name—but he creates such an odd, creepy sense of foreboding in just a couple of minutes that it leaves one eager to see where he's going to go with it.

As it turns out, this sequence has virtually nothing to do with the narrative that follows. Then again, none of what is to come seems to have much to do with anything either. "Dark Glasses" proves to be little more than a tired rehash of Argento’s hits from his heyday strung together by a screenplay (reportedly written two decades ago) that is nonsensical even by his admittedly loopy past standards. Although that opening alone helps to elevate it slightly above most of its recent predecessors, even Argento’s most ardent fans—and I would consider myself one of them—will be hard-pressed to make anything of this particular project.

After the eclipse sequence, we follow a sex worker as she leaves a hotel following an assignation and is gruesomely garroted in the street by a mysterious, black-gloved assailant. As it turns out, she is the latest in a string of killings of sex workers that has left the police baffled. (“Did you notice anything to justify such a horrible murder?,” one asks a potential witness.) The woman from the opening sequence, Diana (Ilenia Pastorelli), is also a sex worker and she too is attacked by the killer after completing a job. She manages to escape his clutches but while trying to escape him in her car, she ends up in a horrific crash that kills the couple in the other vehicle and leaves her blind.

With the aid of friendly counselor Rita (Asia Argento) and a very protective guide dog, Diana begins the process of adjusting to her new reality. (She sticks to her old job, however, as some of her clients look upon her condition as an interesting new kink.) She also reaches out to Chin (Andrea Zhang), the young son of the dead couple who was in the car when it crashed but escaped injury. When she learns that he is mistreated by the other kids at the foster home where he has been placed, she essentially kidnaps him and takes him to live with her, where he acts as her seeing-eye foundling. Eventually, the killer comes back into the picture and Diana and Chin have to go on the run to avoid meeting a gory end.

This may not be the silliest scenario that Argento (who co-wrote the script with Franco Ferrini) has ever worked with, but it might be the laziest. Plot elements, such as the aforementioned eclipse, are introduced in ways that suggest some importance but are never referred to again. The identity of the killer is revealed about halfway through, which is about a half-hour after even the least attentive viewers will have figured it out. And the sentimental stuff between Diana and Chin is more strange than touching and it keeps the suspenseful material off-screen for long stretches of time. As for the conclusion, it's especially weak, even by Argento’s not-exactly-strong track record when it comes to satisfying wrap-ups.

Even as an excuse to allow Argento to indulge in his usual penchant for highly stylized and occasionally deranged mayhem, “Dark Glasses” comes up short. Although a couple of the kills are gory enough, they are staged in a manner so perfunctory it boggles the mind that they could be from the same man behind the gorgeously choreographed mayhem of the likes of “Suspiria” and “Opera.” (One sequence, in which a couple of secondary characters are introduced and almost immediately bumped off, is so awkwardly executed that any cringes that it inspires are caused solely by the clumsy staging.) The closest thing to a genuinely perverse element in the film is Argento’s decision to cast daughter Asia in what proves to be the blandest and most colorless role that she has ever played in one of his films. As for Pastorelli, while some may object to the notion of a sighted actress playing a blind person, I suspect far more will object to the fact that Diana is one of the least interesting heroines in the Argento canon. Pastorelli is unable to do anything to help make her into someone worth caring about, not even during the goofy scene in which she and Chin are running through the woods and stumble into a nest of snakes.

As an enormous fan of Argento, I would love to be able to report that “Dark Glasses” is a worthy entry in his filmography, even if I had to go out on a limb to make my case. However, there's no branch long enough that would allow anyone to defend this particular effort, perhaps the only way in which the word “effort” could be used in conjunction with this film. If there's a bright side to all of this, it is the fact that since most people in America will be viewing it via streaming, they can easily tune in for that wonderful opening sequence and then turn it off, confident that they're not missing anything else.

In theaters today and on Shudder on October 13th. 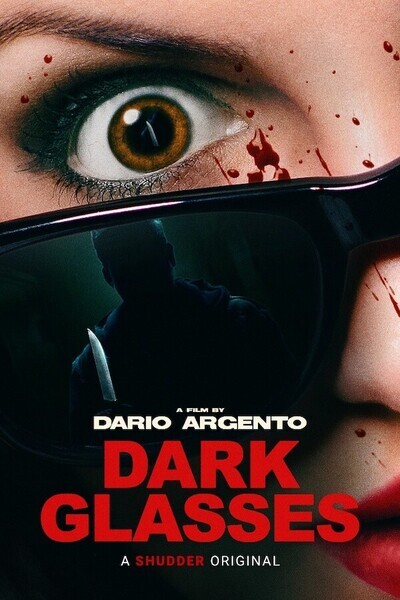