Although it's too long and eventually loses track of Itself, "Danger: Diabolik" is very nearly the movie "Barbarella" should have been.

Both films came out of the Dino De Laurentiis Rome production line at about the same time; both employ violence, high adventure, sex, camp set designs, simplistic dialog and incredible coincidences; and both were based on popular European comic strips. Also, John Phillip Law stars in both films although he can only rightly be said to act in this one.

"Barbarella" was a flop for several reasons: The production values and script were shoddy, and director Roger Vadim had trouble getting passable special effects. "Danger: Diabolik" actually looks better put-together (although its budget must have been smaller), and director Mario Bava has exploited every cliché in the book.

Bava is just the director for this. His credits reveal a thorough grounding in schlock exploitation films: "Hercules In the Center of the Earth," "The Evil Eyes," "Dr. Goldfoot and the Girl Bombs," etc.

"Danger: Diabolik" is a superior example of its type. Law is Diabolik, a supercriminal who lives underground in his electronic hideout with a sexy blond (Marisa Mell) and millions of dollars worth of gadgets. (Didya ever wonder how these guys pull off the largest underground construction projects in history and keep them a secret?) He specializes in grandstand burglaries involving millions of dollars, priceless emeralds, the national gold supply, etc.

The law is hot on his trail, led by the unlikely combination of Terry-Thomas and Michel Piccoli. Terry-Thomas is the finance minister, delivering pleas to the nation in what must be his own Terry-Thomas imitation, and Piccoli is the chief inspector. Piccoli usually plays a sinister, cruel, middle-aged Gallic lover (to Jane Fonda in "The Game Is Over," Jeanne Moreau in "Diary of a Chambermaid" and Catherine Deneuve in "Benjamin"). It is nothing short of hilarious to find him in this enterprise, reciting lines like: "Whatever you say, chief."

The villain is Adolfo Celi, another master criminal who wants to turn Diabolik over to the cops in exchange for a pardon. Celi is the definitive spy-spoof bad guy (he ran the island in "Thunderball"), and this time he has an airplane with a trick door that drops his victims through the floor (in "Thunderball" they fell into a pool of sharks).

We get Celi and Law falling out of the plane and threatening each other on the way down; Law climbing a tower after Piccoli recites, "No one could scale that height," and Law inventing comic-book tricks worthy of Batman (he sabotages a Terry-Thomas conference by releasing Exhilarating Gas, after first carefully taking an anti-Exhilarating Gas tablet). Perhaps because its pretensions are more modest, "Danger: Diabolik" is more successful than "Barbarella" and more fun, too. 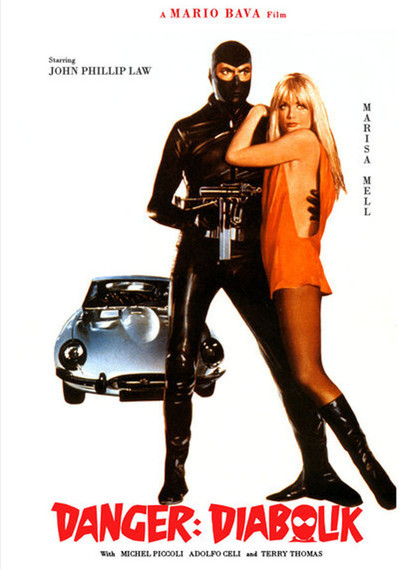