2019 has seen many great documentaries, across the various styles in which to tell a true story. But there’s been nothing quite like Alla Kovgan’s “Cunningham,” an exhilarating testament to documentaries as a boundless form of art. A celebration of New York choreographer Merce Cunningham, the film dreams beyond restrictions many visual storytellers seemingly adhere to. As its narrative tells brief bits about Cunningham's life, and puts his other-worldly dance routines center stage while accompanied by flourishes from 20th century avant-garde music, “Cunningham” honors the tools of filmmaking—sound, action, dialogue—with the harmonious blending of three art forms: music, dance, poetry.

The first words heard from Cunningham are essential to understanding his art, but also to enjoying Kovgan’s film. “I never was interested in dancing that referred to a mood or or a feeling, or in a sense expressed the music ... the dancing does not refer, it is what it is. It’s that whole visual experience.” That statement provides a path that most art doesn't: Don’t interpret. Just watch. It’s an inviting, liberating, intoxicating mindset, and perfect for a movie whose immense pleasure comes from beholding continually inspired creativity, simultaneously from an intentional debut director and an instinctual renowned choreographer.

In lieu of a typical structure, Kovgan presents Cunningham's life as like a string of performances, in which we sometimes get to see footage of him doing one (sometimes with close-ups of his massive feet), as matched with a modern dancer (more specifically, a member of the last Cunningham group). The performances are shown chronologically, and span his work from 1942 to 1972 (Cunningham created until 2009, the year he died at age 90).

While it is most concerned with the philosophy behind his dances, Kovgan's editing does create some narrative, with audio snippets of students talking about studying with Cunningham, and later forming a troupe that went on tour in 1964 for an international tour in Europe and Asia (where their audiences weren’t always pleased). A decent chunk of the story focus also concerns his relationship with avant-garde composer John Cage, and reflections from students about getting onto Cunningham's wavelength of instinctual movements that come with no explanation. You could accuse Kovgan's film of not having enough connective tissue between some of these story elements, but "Cunningham" never wants to be fulfilling as simply a biography to begin with.

The film touches upon some of Cunningham's most famous collaborations, like with the cathartic cacophony of Cage’s music, the pop art of Robert Rauschenberg, or Andy Warhol’s silver clouds, the metallic balloons shaped like pillows. There are plenty of collaborators that aren’t even mentioned (Brian Eno, Radiohead, Roy Lichtenstein); same goes with the accomplishments and awards Cunningham received. But an emphasis on history is not missed; his work speaks beautifully on its own. In Kovgan’s hands, even archive practice footage feels worthy of a museum.

“Cunningham” actively considers the past and present—audio interviews of Cunningham talking about his approach plays over modern-day footage of dancers enacting the philosophies of his words. The routines are the film's true focus, as with one of the first we see: a large empty space with windows for natural light to paint the floor; dancers in pastel-colored leotards are observed by a steady camera that gently goes back and forth with them. The dancers have a precise flow, and the ease of their full-body expressions is just one eye-popping element. Aside from hearing Cunningham’s words (about his interest in “extending movement possibilities” by mixing dance and modern ballet), moments of silence are filled in by a near-meditative sound of feet landing and swiping across the floor. Each aesthetic piece at play demands attention, and it makes for an addictive spectacle.

Other routines that follow contain more sounds, more props, more movie. Cunningham’s “RainForest” from 1968, and accompanied by the experimental squeaks by David Tudor, has three dancers in nude-colored, torn tights kicking around Warhol’s silver clouds, all along a reflective floor. In its preservation of his work, "Cunningham" offers one impressive staging after the next, like a piece that has dancers in the woods, or a rooftop at night. Meanwhile, Kovgan's camera becomes its own force, sometimes looking down on the dancers, running side to side with them, or putting its focus on their surroundings.

Astonishingly, this is Kovgan’s first feature project, and yet her way of presenting her surplus of footage, photos, and letters is far beyond many of her peers. Many filmmakers would cut from one clip to the next, but Kovgan dares to often put her footage side by side, slightly overlap them like photos dropped on a table, or move the clip itself across the screen. The information of "Cunningham" is always in motion, in defiance of docs that seem to start and stop with each talking head. A similar kinetic effect occurs when archive footage is shown as a smaller box with a larger, defining photo of Cunningham in the background—like watching a video with your computer’s desktop visible in the background, but the two boxes orchestrate a grandiose sense of character with a full, striking image (Kovgan's approach is more like the 21st century storytelling in an "Unfriended" movie than a typical doc). Kovgan proves exceptional at making an audience understand a subject through unconventional filmmaking, just like Cunningham was clearly gifted at filling a stage with ideas, without having to say what it all means. 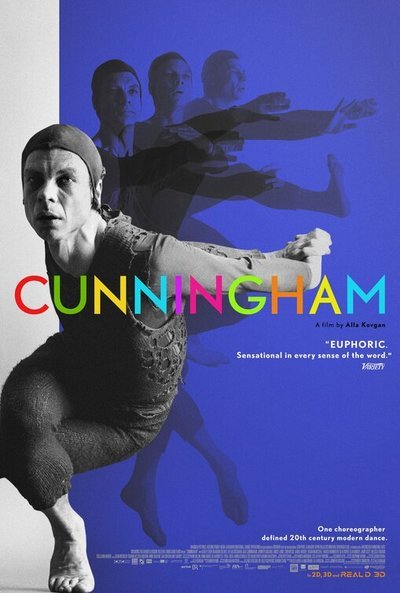