I wish "Copperhead" were better, because it tells a story we haven't seen before, and creates a world that films have rarely shown us.

Written by Bill Kauffman and directed by Ronald F. Maxwell, who also helmed "Gettsyburg" and "Gods and Generals," the movie is based on a novel by Harold Frederic, a newspaperman who grew up in Utica, New York in the middle part of the 19th century. The book draws on Frederic's own childhood experience to show how the North-South divide manifested itself in Union territory. This is not a subject you see addressed often in film, or in American life, for that matter.

There's a tendency to assume that people in Union or Confederate states were all on more or less the same pages when it came to slavery, state's rights and the war—that one could chart monolithic, unvarying opinions by following the line that divided South from North. This wasn't the case. People argued before, during and after the war about causes and effects, and still do. Of course those who held minority opinions had to tread lightly around the majority. Tensions ran high, and could erupt into rancor or violence.

"Copperhead" captures the anxiety that comes from living through a politically unstable time—specifically the unease of knowing you're out-of-step with consensus. The title is an insulting slang term for the "peace Democrats" who lived in the North but opposed the war, pressing for a ceasefire, opposing the draft, and blaming much of the conflict on abolitionists. A copperhead is a snake, a poisonous reptile.

The main character Abner Beech (Billy Campbell) is a "copperhead" who thinks the moral issues that the war is being fought over aren't worth the damage it will inflict on the nation's government, economy, and people. Abner is the sort of man who says things like, "I don’t want our boys dying, and I don’t want the constitution dying with them," and insists that he prizes the safety and integrity of his family above all. "Doesn't the Union mean anything to you?" asks his neighbor Avery (Peter Fonda). "It doesn't mean everything," Abner replies.

Abner's resolve is tested by two developments, one personal, the other national. His son Jeff (Casey Brown), who's named after Thomas Jefferson, has fallen in love with Esther Hagadorn (Lucy Boynton). Esther is the daughter of Jee Hagadorn (Angus MacFayden), a staunch abolitionist who hates the Confederacy. His daughter's relationship with Angus' son adds a touch of Montagues and Capulets melodrama, but mostly it mirrors the tensions already evident in the town itself. As the U.S. gets deeper into the war, grudges and fights become more common. The local Presybyterian minister inject political metaphors into his sermons. When President Abraham Lincoln issues the Emancipation Proclamation,  the town becomes a microcosm of the war, neighbor turning against neighbor and even father against son (Jeff tells Abner he wants to join the Union army).

This all sounds like rich material, and maybe on paper it was. But while Maxwell's leisurely,  theatrical, vaguely 19th century approach toward storytelling feels right for these characters and this setting, it goes too far, and does the film more harm than good.  As much as I appreciated the movie's willingness give us a full minute of a sermon, or a whole song being performed at a local dance—or by Lucy at her piano—there's a touch of Civil War re-enactors society indulgence to them. They often feel like atmospheric detours. And too many of the film's issues are articulated verbally, in what sound like artfully edited position papers or talking points. For every terrifically judged, period-accurate throwaway phrase, such as Abner complaining that Jee's "been eating his way into me like a deer tick," there's a scene that makes you feel as though you're watching the most elegantly costumed, thoughtfully acted school play of all time.

I found the movie more intriguing as study of just how hard it is to hold an unpopular opinion without being demonized and abused. This sensation will be familiar to fans of Maxwell's films, as well as to Civil War buffs who think it's good and healthy to complicate history rather than boil it down to "slavery was an abomination, the war was fought to end it" and shout down anyone who tries to add a sentence that starts with, "yes, but."

Maxwell has a reputation (among liberal Northern critics, at least) as a sort of very gentlemanly Confederate apologist. He uses the big-bearded Civil War drama as a way to re-frame historical discussions in ways that restore humanity to the whites of the antebellum South, characters more often associated with the likes of Calvin Candie in "Django Unchained." I've had issues with Maxwell's work in the past—particularly "Gods and Generals," a thoughtful if rather shaggy movie which at times veered toward "Gone with the Wind" sentimentality about the marvelous way of life that vanished when those damned Yankees swept in. Maxwell's screenwriter Kauffman was once hailed as “A conservative of the highest order, unlike the false brand now conducting our national affairs” by none other than George McGovern.

These are complicated men who want to challenge received wisdom. Although "Copperhead" has touches of special pleading and axe-grinding—making sure, for instance, that we know that Abner disapproves of slavery, while at the same time painting the abolitionist Jee a volatile, bug-eyed troublemaker—it comes closer than Maxwell's other works to illuminating the complexity of the body politic. The filmmakers approach their subject with quiet fervor. I just wish the result were more cinematic, less theatrical and literary; more of a drama, less of a re-creation. 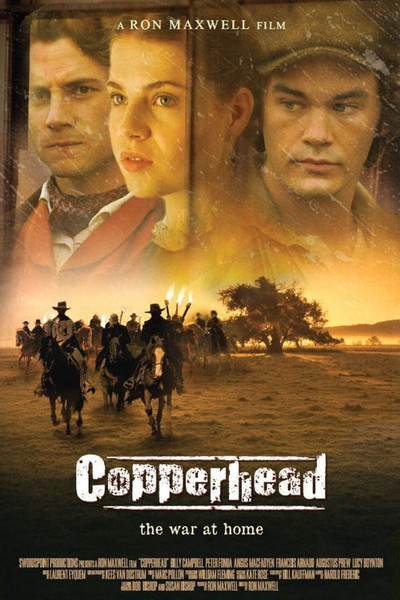