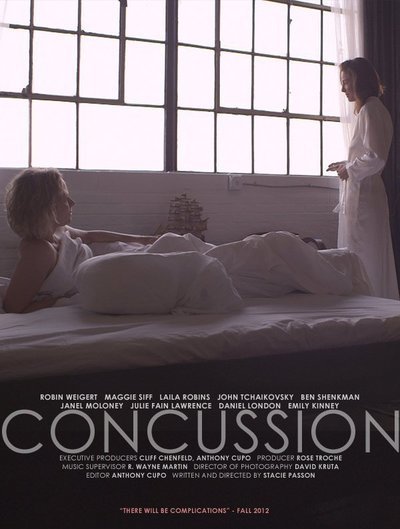 The story is old and familiar: Married couple, busy with work and raising children, lose the passion and start taking each other for granted. One person strays, seeking sexual thrills. Events then unfold in a predictable fashion. The couple either re-connects or disintegrates. We've read it in great literature, we've seen it in more movies than be counted.

"Concussion", a new film written and directed by Stacie Passon, takes this well-worn storyline and makes something unique out of it, something fresh and bizarre. It's not just because "Concussion" is about a marriage between two women, although that is part of it. The lesbian marriage pictured here has all the trappings of good happy suburban life, but with the same underlying malaise we have come to expect in such portrayals. Abby and Kate's lesbianism is treated as a given, barely worth dwelling on. It was a treat watching the film because I actually didn't know what would happen next. How is that possible with such familiar material? The script is excellent, with some pretty sharp edges, but I credit mostly Robin Weigert, whose portrayal of Abby is one of the best performances of the year.

Abby and Kate (Julie Lawrence) are married, and living in the suburbs, raising two kids. After Abby gets a concussion in the first scene, bonked on the head by her kid's baseball, things change. Rifts that were probably there before crack open into gigantic crevasses. The spark is gone from the marriage. Abby is sexually hungry, Kate seems to prefer celibacy. Kate has a demanding job as a divorce lawyer, and Abby has a business flipping apartments in nearby Manhattan.

One day, almost on a whim, Abby makes an appointment with a prostitute. The experience is not pleasing, but it sparks something in her. With the help of her contractor Justin (Johnathan Tchaikovsky), whose girlfriend just happens to run a call-girl business out of her pre-law dorm room, Abby sets herself up as a belle du jour, using one of her properties in Manhattan as a workplace, and calling herself "Eleanor".

"Eleanor" meets with her clients for coffee beforehand, and then sets up an appointment at the loft. The majority of her clients, at first, are college students, either curious or lonely or both. Because the apartment in New York is a work in progress, and she and Justin are still fixing it up, she has a plausible explanation for why she is gone during the day so much. As long as she is home in time to pick up the kids from school, Kate barely seems to notice what is going on.

In her spare time, Abby hangs out with the other soccer moms in her upscale neighborhood, going to spinning class every morning, gossiping over coffee. What bonds them is the fact that they are all moms with kids the same age. Abby has a casual crush on Sam (played by the wonderful Maggie Siff, who played Rachel Menken in Season 1 of "Mad Men"), who is not part of the group, is married to a partner at Goldman Sachs, and is beautiful and distant.

While it is not a surprise to us that eventually Sam makes an appointment with "Eleanor", it is a huge surprise to Abby. Her compartmentalized worlds begin to collide. "Concussion" is most interesting when it is about the lies we tell ourselves in order to get along in day to day life, the pretense required for us to maneuver socially. If someone asks, "How are you?" it is expected that you reply, "Fine, how are you?", not "Ever since I got hit on the head, I feel totally disconnected." Abby stops being able to pretend.

On the flipside, what we see in the "Eleanor" scenes is Abby lost in the world of pretending. This is part of the job of prostitution, of course, in becoming someone else's fantasy. Sometimes she dresses elegantly, other times she's sleek and lean in black leather. With a sweet overweight college girl who has never been kissed, Abby is emotionally supportive. Some women like it rough. Some women like it slow. Abby can do it all. She gets very good "reviews". The scenes with her clients are sexy, but not graphically so. The scenes are more about the energy of sex, the moment when you let go and give over to sensation. Abby is comfortable being dominant, setting the mood and pace. When she tries the same things at home with Kate, it does not go over well.

One of her regular clients, known only as Woman #3, is played by the great Laila Robins. In their first meeting, Abby is obviously taken aback by the fact that Woman #3 is older than she is. Abby has been comfortable being "the older woman" with her other clients. It gives her an edge up, an advantage. That advantage is lost with Woman #3, who is sexually experienced, knows what she wants, and isn't intimidated by Abby. She clocks Abby immediately as a manipulator and tries to walk out. Abby, befuddled for the first time, has to coax her to stay.

What we get in these scenes with Laila Robins, without the script ever being explicit about it, is that women fear growing older, and women fear other women who are older than themselves. It's like looking into a dark mirror. What is granted power in our culture is Youth, and Abby, at 42, is no longer young. Woman #3 is no longer young either, but she, unlike Abby, holds power in her own hands. Abby doesn't like that. She wants to be the Alpha. It's a very complex dynamic, and we get it all from the eloquent behavior of Robins and Weigert.

Robin Weigert is known mainly to HBO audiences as Calamity Jane from "Deadwood", although she's been a regular on many other television shows since then. She gives a star performance here. Her work is reminiscent of Jill Clayburgh, or Diane Keaton, or Ellen Burstyn, leading ladies in an era of film that did not shy away from mess and ambiguity. Weigert's emotions are unpredictable. She sits with the other bored soccer moms, and she seems to be looking at them with a cold assessing eye. There's something unpleasant about her as the film goes on. She has a secret. She knows something the other women don't. It makes her feel superior. She's childish. When she says to Sam, scoffing, "You're just bored," Sam retorts, "You're bored, too!" Somehow, this had never occurred to Abby.

Stacie Passon, who comes from a commercial background, distinguishes herself with the script and her direction. Unfortunately, the final third of the film loses the momentum that had been building throughout, and "Concussion" limps towards the finish line. But overall, Passon has a great eye and ear for the rhythms of everyday life, the snatches of conversation at dinner parties, the way we behave when we are trying to hide something. The sudden moments of truth and revelation are starkly highlighted against the disorienting patterns of Abby's double-life. In one late-night conversation with her wife, Abby says, casually, that she doesn't like "the Christopher Columbus line" their daughter has to say in a school project. "It bothers me," Abby says. "Doesn't it bother you?" Kate, frustrated in a way that suddenly becomes palpable, says, "I just want you to like SOMEthing." Her words are another blunt blow to the head, and Weigert's face shows the shock of it. What is so interesting about Weigert's portrayal of Abby, what makes it so compulsively watchable, is that you understand that she doesn't quite know why she is doing what she is doing. She has stopped asking herself questions. Maybe she never asked those questions in the first place.

It's fascinating to watch a lead character who is a mystery even to herself. It elevates what could have been banal material into something existential, something mysterious and true.