Come and Find Me

Pseudo-suspenseful romantic-drama "Come and Find Me" does not work. That needs saying up front because the thing itself is not an unworkable premise, nor is its cast bad, nor its director inconsiderate, or its scenario dumb. In fact, the whole thing is altogether smarter than you might expect from a two-star-rated flick. Still, "Come and Find Me" lacks sufficient inspiration and follow-through to be truly exciting. The raw ingredients are there: "Breaking Bad" actor Aaron Paul plays a characteristically likable everyman who discovers his girlfriend is not who she appears to be after she goes missing for a year. But there's nothing to "Come and Find Me" beyond a superficial investment in its central characters' romantic relationship.

Paul plays David, a graphic designer who becomes obsessed with finding his girlfriend Claire (Annabelle Wallis) after she suddenly disappears. David doesn't have many clues to go on, though he does eventually find a roll of undeveloped film that leads several hostile interested parties to his door, including torture-happy Russian gangsters, and equally shady government agents.

Still, remember: this is a romance first, and then a thriller. So "Come and Find Me" mainly concerns David's memories of Claire. We see various episodes in their relationship, from when they first meet to their first serious fight. There are signs of Claire's double life ostentatiously hidden throughout these scenes, but there's no puzzle to solve here. Instead, writer/director Zack Whedon shows us Claire and Paul's relationship in order to establish David's fierce loyalty. That theme is crucial since David is constantly being betrayed by friendly strangers who claim to know Claire, or have information about her. Much of Whedon's drama is comprised of flashbacks, but those flashbacks give meaning to David's easily-frustrated quest for answers.

This is a bit of a problem since a constant series of interrupting flashbacks winds up stalling "Come and Find Me," Whedon's directorial debut, whenever it starts to develop momentum. Whedon's flashback-heavy plot is also frustrating because Wallis and Paul don't seem to have any chemistry. This is partly a matter of poor direction, and partly just a sad lack of airborne sparks. Wallis and Paul are supposed to appear clumsy when they first lock lips because their relationship is initially defined by Claire's awkward, giddy energy. She thinks David is following her from the bus stop but he actually lives in the same building as her. Likewise, when they kiss, she leads: she pounces on him, and pushes her face into his, like an eager high-schooler who has no idea what she's doing. But when the couple lock lips later in the film, she kisses him in the same exact way. It's not cute at that point, but rather confusing: why haven't these two actors learned how to express their love for each other?

The short answer: Whedon has a lot of good ideas, but doesn't follow through on them. He films Paul using fairly rudimentary/uninspired medium and long shots. Whedon also doesn't explicitly spell out any truths about his characters' fears of intimacy during David's myriad flashbacks. We see David and Claire flirting when they paint their first apartment together, and wind up scribbling bathroom-stall-quality graffiti insults to each other all over their ceiling. We see them fight after she comes home in an inexplicable mood and he elects to sleep on the couch. And we see them try to spice up their love lives when they re-enact their first meeting. But none of these episodes show us anything about Clair and David beyond a basic seasonal progression that perplexingly comes full-circle at film's end. I won't explicitly tell you what happens, but I will tell you that that the film's biggest problem is a matter of showing romantic love through cliches. A better dialogue-writer could have done wonders with scenes where she teases him. And a superior director might have been more patient, and focused on the furtive looks, twitchy limbs, and playful scowls that Paul and Wallis exchange.

But Whedon is not that filmmaker. I wish he was because Paul delivers a finely-tuned broody performance, albeit one we've seen him deliver before in everything from indie drama "Smashed" to big-budget action-adventure "Need for Speed." Wallis doesn't have much of a role since she is supposed to be elusive, but she does well enough with what few lines she has. The main problem is Whedon's lack of creativity. His film's stop-and-go pace wouldn't be so bad if he nailed any one part of it.

But Whedon even manages to drop the ball when his film's in thriller mode: he delivers a handful of lackluster chase scenes and way too many slack, ostensibly confrontational conversations between David and, well, every two-faced "good guy" he can call on to help him. "Come and Find Me" constantly threatens to go places that many contemporary thrillers never venture to, but ultimately runs out of gas and winds up taking the path of least imagination. 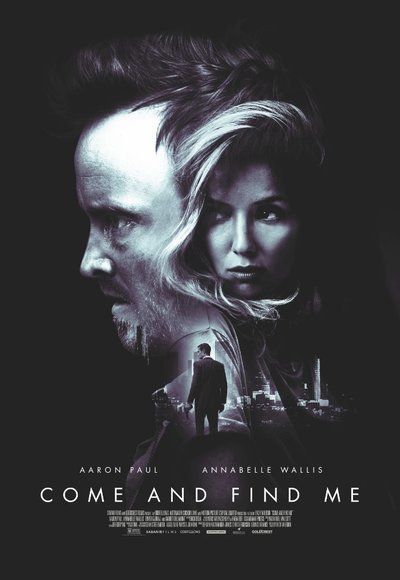