The overthrow of a democratically elected leader, the imposition of a fascistic military strongman on a population, the years of human rights abuses and crony capitalism that followed; the history of Chile from the early 1970s right into the early 20th century provides any good liberal-minded thinking person plenty to get steamed about, and there have been plenty of fiction and non-fiction stories told about it during and after that time (including the much-bruited 1982 Costa-Gavras picture “Missing,” starring Jack Lemmon and Sissy Spacek). “Colonia,” directed by Floran Gallenberger from a script by Torsten Wenzel and the director, uses a little-known wrinkle in Chile’s horrific narrative as its springboard.

The movie begins as a pretty conventional period romantic drama. Emma Watson’s Lena is a stewardess (it’s 1973, female flight attendants are still called that) for Lufthansa, and unlike her colleagues, she’s a little adventurous in her love life: she’s involved with German-born activist Daniel (Daniel Bruhl), who’s rousing The People at a street rally as she’s on the shuttle from Santiago’s airport to her hotel. Lena hops off the bus and into Daniel’s arms for a few blissful days of love and activism, and then, boom, the coup hits, and they’re out on the streets. Daniel, so ardent he can’t help himself, gets himself in big trouble with the militia after he’s spotted trying to document their repressive activities with his camera. Lena and Daniel are shipped to a soccer stadium for processing and Daniel gets ratted out. Lena’s let go, and heartbroken.

She soon finds out that Daniel’s likely been taken to the south, to the headquarters of a religious sect—actually, cult—run by another German, named Paul Schäfer. No, I’m not making this up. The moviemakers aren’t either. Paul Schäfer founded the real-life Colonia Dignidad (German religious diaspora to Latin America go back to the early 19th Century, incidentally) in 1961, combining Baptist-style tenets, punitive agrarian lifestyles, and aggressive anti-Communism. The latter, especially, made him a useful tool for Pinochet, and the colony functioned, after the coup, as a repository for dissidents, who were tortured and imprisoned there. A fascinating, terrible place. One that might have more effectively conveyed to film viewers outside the strictures of a romance-based suspense picture. But, alas, this is the story of Colonia that we have been given.

Lena, on learning of this place, dresses way down and hides there, trying to go undercover as a God-seeker. Schäfer himself, played with effective imperious chilliness by Michael Nyqvist (who also manages an unnerving resemblance to the real-life figure) sees “through” Lena immediately, and has her unbutton her drab blouse to reveal a lacy bra underneath. He accepts her into his flock anyway, and soon she’s farming the land in sexually segregated non-splendor, keeping her eyes peeled for Daniel.

Daniel in the meantime has been beaten and tortured so thoroughly he’s believed to be brain-damaged. But he’s not, and he’s crafty enough to know not to let on. How they will find each other and what they’ll do once that happens takes up some time, and the contrivances that follow are a little over-determined. It’s very convenient that Lena is saved from a gang beating by an alarm being tripped by Daniel, completely by coincidence. Once the couple is reunited, director Gallenberger does manage to ramp up some effective suspense depicting their efforts to escape. But these mechanics, in turn, diffuse what also wants to be a powerful story of human rights abuse. Watson and Bruhl give it their best, and Nyqvist makes a powerful villain, but “Colonia” winds up being a movie that wants to get its way on too many levels, and winds up not satisfying on most of them. 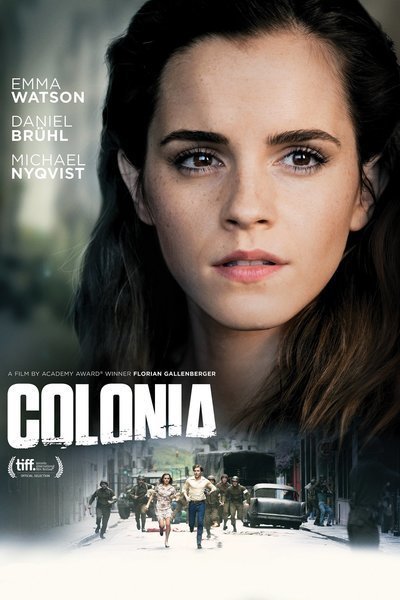