Much has already been written about the bravery of “Missing”, which dares, we are told, to make a specific attack on American policies in Chile during and after the Allende regime. I wish the movie had been even brave enough to risk a clear, unequivocal, uncompromised statement of its beliefs, instead of losing itself in a cluttered mishmash of stylistic excesses. This movie might have really been powerful, if it could have gotten out of its own way.

The story involves the disappearance in the early 1970s of a young American journalist in a country (not named) that is obviously intended to be Chile. The young man and his wife (played by John Shea and Sissy Spacek) have gone down there to live, write, and absorb the local color. But then a civil war breaks out, martial law is declared, troops roam the streets, and one day soldiers come and take the young man away. The movie is the record of the frustrating attempts by Spacek and her father-in-law (Jack Lemmon) to discover what happened to the missing man. It suggests that the young American might have been on some sort of informal hit list of left-wing foreign journalists, that he was taken away and killed, and that (this is the controversial part) American embassy officials knew about his fate and may even have been involved in approving his death.

If that was indeed the case, then it is a cause for great anger and dismay. And the best scenes in "Missing", the ones that make this movie worth seeing despite its shortcomings are the ones in which Spacek and Lemmon hack their way through a bureaucratic jungle in an attempt to get someone to make a simple statement of fact. Those scenes are masterful. The U.S. embassy officials are painted as dishonest weasels, shuffling papers, promising immediate action, and lying through their teeth. Lemmon and Spacek are about as good an example of Ordinary Americans as you can find in a movie, and their flat voices and stubborn determination and even their initial dislike for one another all ring exactly true. If "Missing" had started with the disappearance of the young man, and had followed Spacek and Lemmon in a straightforward narrative as they searched for him, this movie might have generated overwhelming tension and anger. But the movie never develops the power it should have had, because the director, Constantin Costa-Gavras, either lacked confidence in the strength of his story, or had too much confidence in his own stylistic virtuosity. He has achieved the unhappy feat of upstaging his own movie, losing it in a thicket of visual and editing stunts.

Let's begin with the most annoying example of his meddling. “Missing” contains scenes that take place before the young man disappears. We see his domestic happiness with his wife and friends, we see him reading from The Little Prince and making plans for the future. The fact that this material is in the movie suggests, at least, that the story is being told by an omniscient author, one who can also tell us, if he wishes to, what happened to the victim. But he does not. Costa-Gavras shows us all sorts of ominous warnings of approaching trouble (including a lot of loose talk by American military men who are not supposed to be in the country, but are, and all but claim credit for a coup). He shows us a tragic aftermath of martial law, guns in the streets, vigilante justice, and the chilling sight of row after row of dead young men, summarily executed by the new junta. But he does not show us what happened to make the film's hero disappear. Or, rather, he shows us several versions, visual fantasies in which the young husband is arrested at home by a lot of soldiers, or a few, and is taken away in this way or that. These versions are pegged to the unreliable eyewitness accounts of the people who live across the street. They dramatize an uncertain human fate in a time of upheaval, but they also distract fatally from the flow of the film.

By the time “Missing” begins its crucial last half-hour, a strange thing has happened. We care about this dead American, and his wife and father, almost despite the movie. The performances of Spacek and Lemmon carry us along through the movie's undisciplined stylistic displays. But at the end of the film, there isn't the instant discharge of anger we felt at the end of Costa-Gavras's great “Z” (1969), because the narrative juggernaut of that film has been traded in for what is basically just a fancy meditation on the nature of reality. Something happened to the missing young man (his story is based on real events). Somebody was guilty, and somebody was lying, and he was indeed killed. But “Missing” loses its way on the road to those conclusions, and at the end Lemmon and Spacek seem almost to mourn alone, while the crew is busy looking for its next shot. 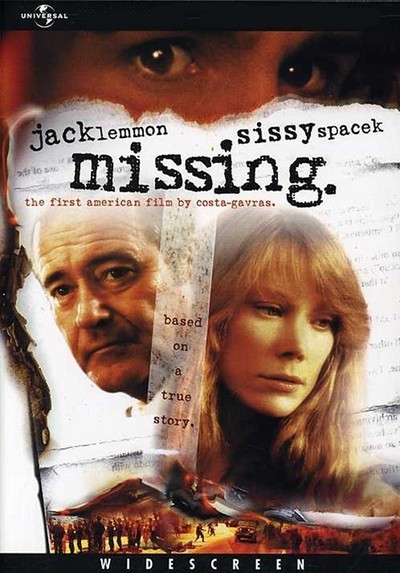