More than any movie, Autobahn-actioner “Collide” reminds me most of Bruno Mars’ song “Grenade,” in which an adult declares he would catch a grenade, throw his head on a blade, or even jump in front of a train for someone who doesn't feel the same. For former drug dealer-turned-good-boyfriend Casey (Nicholas Hoult) the reckless devotion is not that much different: for the love of his life Juliette (Felicity Jones) and the kidney transplant she needs, Casey hijacks a truck full of cocaine-filled golf balls, pisses off a powerful German drug supplier, and soon enough has to drive really fast on the Autobahn to rescue his in-danger girlfriend, while being chased by men with big guns. Hand-in-hand with its bleeding-heart nature, “Collide” has the ballsy idea of making a serious action movie about a fool in love, but that just becomes one of its many bungled stunts.

Despite not being screened for press (always a noteworthy footnote for a movie no matter the result) and being one of those films with a comical excess of producer tags in the beginning, the latest from gritty action director Eran Creevy starts off amicably. Huge stars Jones (“Rogue One: A Star Wars Story”) and Hoult (“Mad Max: Fury Road”) orchestrate fast chemistry as two Americans in Cologne, Germany that have a meet-cute, then a dreamy, softly-lit date-cute montage, and then a life-or-death conflict. (Their shared history of having worked multiple times with relationship-curious director Drake Doremus seems like less and less of a coincidence). Jones’ character, Juliette, needs a quick kidney operation that she can only get in the United States, a venture they can’t afford. To make the money, Casey elects to help his old boss, a wacky Turkish drug dealer who loves 70s and 80s movies named Geran (Ben Kingsley, hilarious) steal from his supplier, the monologue-prone, super-wealthy Hagen Kahl (Anthony Hopkins). It takes a long time for Creevy & F. Scott Frazier’s script to get to this conflict. Once it finally gets there, “Collide” starts to fall apart.

“Collide” takes Casey’s so-called romantic recklessness way too far, without ever providing proof that it’s smarter than a character who is meant to be kind of dumb. Casey’s plan to get the truck (with “a truck-driving Terminator” commandeering it) is highly fallible, the same way that Hopkins finds out he should kidnap Juliette for leverage is particularly clumsy (Casey is wearing the hospital patient band with her name on it when Kahl captures him). There’s even a moment in which Casey tries to escape the men chasing him on foot by pretending to be homeless, by taking off his coat and sitting next to it on the street, which proves fruitless. A monologue by Casey later in the movie expresses the script’s awareness to his clumsiness, a brief moment where Hoult’s commanding, sincere presence is taken advantage of by an action movie that often relies on casting more than character. But it’s too late: the previous scenes have been marred by a lot of “Huh?” turns of events, the emotional distance too wide.

“Collide” does best when embracing its eccentricities, which ultimately come in the form of sporadic moments with Hopkins and Kingsley. If you’re going to see this forgettable movie at all, come for the pretty young people but stay for the Oscar-winning actors who are doing inconsequential, character actor parts with scene-stealing carte blanche. This includes Hopkins throwing in an impression of Sylvester Stallone or Kingsley tapping back into that “Iron Man 3” nuttiness. They bring in some of the dark comedy that makes “Collide” just a little stranger than your usual PG-13 studio venture, and prove that “Collide” will please Hopkins and Kingsley completists most of all.

In its more serious efforts, like crafting effective action scenes, “Collide” is less charismatic. There are a few slam-bang moments that are set-up for the simplest of thrills—smashed cars and shoot-outs in narrow German village streets—but the lack of established geography (in camera coverage and editing) turns them to mush. Even when cars are being tossed around like a “Blues Brothers” movie on the Autobahn, there is a fatal lack of tension to carnage that’s meant to occur within a ruthless timeframe. Part of that is the film’s inability to sell sympathy towards people behind the wheel, good or even evil. But a larger part of that is Creevy’s vision becoming defined by how incomplete it feels.

The action movies that inspired “Collide,” ranging from '90s genre titles to the rebooted “Fast & Furious” franchise, all share a sappiness about machismo. But “Collide” takes the macho schmaltz a step further, where the shoot-outs and car chases on the Autobahn are all about doing anything for love. It makes for one very cheesy ballad of an action movie, possibly with sincerity at its core but little idea of its ultimate ridiculousness. 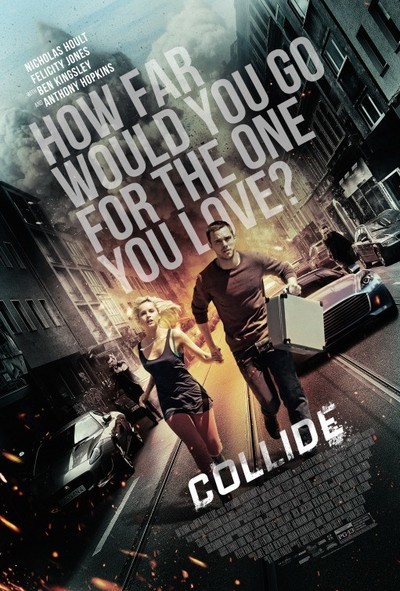