In his first film role since the conclusion of "Breaking Bad," Bryan Cranston dons a fake beard, dark sunglasses and a Russian accent so cartoonishly thick you'd swear he's hunting moose and squirrel with Boris and Natasha in "Cold Comes the Night."

You might expect that the formidable star would be at the center of a film like this, a low-budget neo-noir about desperate people in small-town, upstate New York. Instead, Cranston is a supporting player in the tale of a struggling single mom played by the increasingly versatile Alice Eve.

Aside from the vividly bleak atmosphere, Eve's performance is the main reason to invest any time "Cold Comes the Night," a pulpy and portentous title that reminded me of an old "Family Guy" joke about a terrible screenplay called "Death Spares Not the Tiger." Director and co-writer Tze Chun seems to have been be aiming for the sort of elevated B-movie material that made "Fargo" and "A Simple Plan" so great: movies in which regular folks get caught up in crimes and make one bad decision after another. But his characters lack the complexity of those superior films and his story (with co-writers Osgood Perkins and Nick Simon) feels too thin to be completely engrossing.

A de-glammed Eve is riveting and grounded throughout, though, as Chloe, a widow who runs a cheap motel along the highway where hookers and drug users are the primary visitors. Chloe stashes away as much cash as she can to provide for her daughter, Sophia (the talented-beyond-her-years Ursula Parker, who plays Louis C.K.'s younger daughter on "Louie"), with whom she shares a cramped apartment above the motel office. She also has the protection of crooked local cop Billy (Logan Marshall-Green), with whom she has some sort of romantic history.

Clearly, this is not the best environment in which to raise a child. A social services worker informs Chloe that if she can't find a more suitable home in two weeks, Sophia will have to live in foster care. Chloe's response: "I'd rather be dead," which establishes early on that this is a resilient, young woman who already has lived a life and built up some defenses.

She'll need them when Cranston's Topo stops in for a few hours of sleep. A veteran drug and cash mule, Topo is en route to the Canadian border with his squirrelly nephew and a duffel bag full of money to deliver. Because here's the deal: He's nearly blind, so he needs someone to drive him to assignments and help guide him to perpetuate the ruse that he's still fully functioning. This is actually a fascinating idea for a character: What DO you do with your life when you get too old and feeble for the crime business? It's also, unfortunately, an underdeveloped idea.

Topo proves he's still dangerous, though, even if his accent is unintentionally giggle-inducing. Maybe he was supposed to be funny—who knows? Either way, he seems out of place. We never get a firm grasp on who he is, so the Slavic background comes off as a superfluous (and distracting) affectation.

Things go horribly wrong, as they are wont to do in films like "Cold Comes the Night," and Chloe must use her local connections to help Topo recover his loot. "Let us play the I Spy, huh?" he asks young Sophia, who sits in the back seat of Chloe's station wagon while Mommy tries to break into an impounded Jeep. Chloe also must tangle with Billy, the police officer she thought was on her side, as well as his trashy wife (Erin Cummings); it's hard to tell who's screechier between the two of them. (Later on, Marshall-Green will overact spectacularly while brandishing his sidearm about and win that contest.)

Still, "Cold Comes the Night" provides Eve with an opportunity to showcase yet another side of her talent. Recently, she was fiery and flirty going toe-to-toe with Stanley Tucci in Neil LaBute's blackhearted "Some Velvet Morning," and she's had an appealing supporting presence in films including "Star Trek Into Darkness," "She's Our of My League" and "Starter for 10." Here, as the situations and characters turn more flimsy and implausible, Eve becomes stronger and more resourceful. 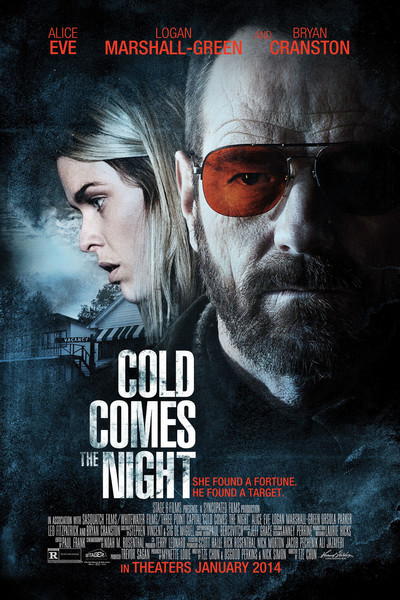