The trouble with "Some Velvet Morning" is that it’s impossible to discuss why it's so powerful without giving away much about the very revelations and plot twists that help make it so.

We can say this: It represents a return to the kind of writing and filmmaking with which Neil LaBute made his name. That’s good news for fans of his earlier work, like “In the Company of Men” and "The Shape of Things," and bad news for people who like their films filled with hope and redemption. That foray into mediocrity with "Lakeview Terrace" and outright oddity with his remake of "The Wicker Man" seems to have been a blip in retrospect.

LaBute is back to being his black-hearted self once more. "Some Velvet Morning" is not based on one of his stage productions, as some of his best-known movies have been, but rather feels like a play on film. It features two actors in an enclosed setting—a tastefully decorated New York brownstone—doing nothing but talking in real time over the course of 82 minutes. And flirting. And bickering. And eventually getting physical with each other.

In such a scenario, the casting and chemistry of the actors are crucial, and Stanley Tucci and Alice Eve more than rise to the formidable challenge. They play beautifully off each other, even as (or perhaps especially when) they're hurling ugly sentiments back and forth.

LaBute lulls us with a long establishing shot during the opening titles: a slightly blurry overhead look at Eve lounging on a couch in a bright red dress, listening to music on her headphones. Her reverie (and ours) comes to an abrupt end with the arrival of an unexpected visitor at her front door: Tucci’s expensively dressed Fred, an attorney who has shown up unannounced with whatever belongings he could stuff into his suitcases.

Fred says he's finally left his wife of 24 years for Eve's Velvet (a name we learn is not really hers, and one she detests), a much younger Brit with whom he’d had an affair. Never mind that Fred and Velvet haven't been romantically involved for about four years, and that things ended badly. Now they can finally be together, he insists happily—and whether Velvet actually wants that, or ever wanted that, is at the heart of the debate over the rest of the film.

LaBute lets his characters reveal themselves in drips and drabs as they get reacquainted and rehash what went wrong in their relationship. It's a slow burn but the tension is undeniable from the start; these two people are definitely not on the same page, and watching the balance of power teeter back and forth between them is riveting. As they fumble to form a civilized conversation, they misread each other's signals and tell bad jokes that fall flat. Eventually, pent-up resentments bubble to the surface.

These are people who are in love with language; they choose their words carefully for maximum effect and even sprout off into side conversations about the specifics of certain phrasing. But that description makes "Some Velvet Morning" seem uptight, and it’s anything but that. Aside from the awkwardness of their first few moments together, Fred and Velvet endure an emotional roller coaster and they drag us along for the ride. The fact that LaBute shoots their conversations in long, single takes, often from a hallway or another room, adds to the sensation that we're eavesdropping on them.

Fred alternates between being needy and condescending. He can be affectionate as well as passive-aggressive. Sometimes he’s like a scolding father figure, while at other times he's like a jilted teenager. At his most brutish, he’s misogynistic and crassly forward in his sexual remarks (shocking coming from a LaBute film, right?). In all his character's forms, Tucci remains vibrant and unpredictable—intimidating, even, despite his slight stature.

Velvet, meanwhile, is the cool and confident icy blonde in the great Hitchcockian tradition. Her classic good looks and pleasant demeanor suggest a softness to her femininity, but in time she proves she's both quick-witted and quick-tempered. She can be brutal as she brandishes hidden secrets like weapons. Eve's constant evolution makes her fascinating to watch, and she more than holds her own opposite the veteran Tucci. (She’s previously stood out in supporting parts in films including "Starter for 10" and "Star Trek Into Darkness.")

Fred and Velvet’s battle builds to a painful crescendo, but it’s not the last word on their relationship. The absolute ending of "Some Velvet Morning" is a stunner, one that is sure to irk and awe viewers in equal measure (I’m in the latter camp). LaBute may not be saying anything novel about constricting gender roles and the cynical ways in which we sell ourselves out, but he is saying it in his signature, provocative style. 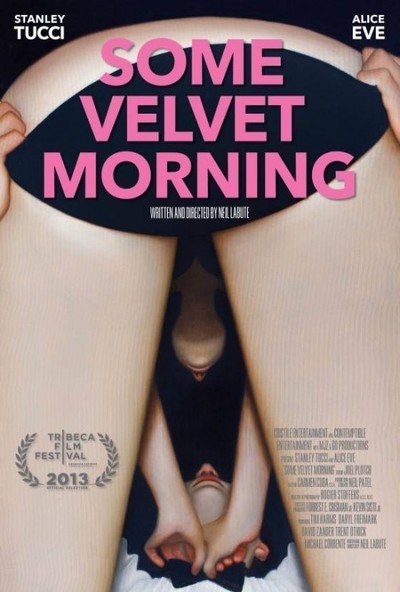