“Christmas Eve” desperately wants to be a “Love Actually” for those who might appreciate a yuletide film that at least acknowledges that there is a religious reason why we deck the halls. But a humorless Gary Cole (impossible, I know, but he is), as a jaded atheist surgeon who nevertheless fulfills a dying patient’s wish that he pray for her, is a poor substitute for Hugh Grant's British prime minister giddily celebrating a victory over Billy Bob Thornton’s lascivious American president by shaking his groove thing to “Jump.”

This clumsy ensemble piece revolves around some not very interesting people who get stuck in six elevators in sundry Manhattan buildings after a delivery van accident cuts the power off on Dec. 24. It fails to provide the sorts of human inter-connections and deep revelations for which director Mitch Davis seems to be striving. God might work in mysterious ways, but “Christmas Eve” barely works at all with its misbegotten mingling of supposed mirth (someone actually shoots off a pistol once or twice in one of the elevators just for kicks—yeehaw!) and tepid devotional drama.

That doesn’t mean there aren’t surprises in store for anyone who stumbles upon this holiday turkey among the VOD titles on their TV listings, or finds it at an actual theater.

The first is, despite regular cutaways to glossy generic footage of Big Apple landmarks decked out for the holidays, the film was shot entirely in Sofia, Bulgaria. I guess drab claustrophobic elevator interiors are pretty much the same around the world.

Next: “Christmas Eve” is CNN chat-meister Larry King’s first film producing credit, presumably because his seventh wife, Shawn Southwick King, plays a nurse who encourages Cole to believe in “things unseen.” What she leaves unseen, however, is much acting talent.

But the most unexpected occurrence is the fact that somehow, someway, in a cast that is low on A-listers, the great Patrick Stewart might give the worst performance as a bellicose business tycoon who is left stranded all alone in the winter cold, trapped in a cage-like lift atop a skyscraper under construction. After Trump-ishly harrumphing at employees trying to rescue him during his early scenes, this esteemed actor must monologue his way through a Scrooge-like change of heart—a role that Stewart actually nailed in a 1999 TV movie. Except, this time, his dialogue is unfortunately provided by Davis and his co-writer, not Charles Dickens.

On top of that, Napoleon Dynamite himself, Jon Heder, might give the best performance as a just-fired tech specialist who is forced to share the office elevator with the fantasy-football-obsessed jerk who canned him (Max Casella). Or, as Heder’s character dubs him, “the spawn of Satan himself.”

As for the other inconvenienced elevator sharers, they include an annoying gum-chewing photog (James Roday of TV’s “Psych”) who badgers his shy female companion to pose for him like a model in exchange for a candy bar. For some reason, we are supposed to consider this a favor and not harassment. There is also a gang of seven bickering musicians, including “Curb Your Enthusiasm’s” Cheryl Hines as a sassy trumpet player, who can’t agree on much other than that someone has rudely farted in the confined quarters and not owned up to it.

Then there is a randomly oddball quintet consisting of two TMI-afflicted ditzy girls, a musclebound dude in a skimpy Santa getup (I thought I heard him mumble, “I am a eunuch,” but my mind might have been wandering off), an effete germophobe art expert and a high-IQ type in an Einstein T-shirt (since that is what smart people like to wear) who passes the time by testing everyone with brain teasers.

Oh, there is another surprise. Davis, who is also responsible for Mormon missionary drama “The Other Side of Heaven,” is rather timid about inserting many direct observations about religion into his script and instead forces us to infer what it means when several stuck characters are revealed to be related to those caught in different elevators. I am guessing it might have to do with it being a small world after all, or that fate, or some sort of Supreme Being, decided to teach these humans a lesson.

The lesson I learned? If you want to make an uplifting film, you won’t get there with broken elevators. 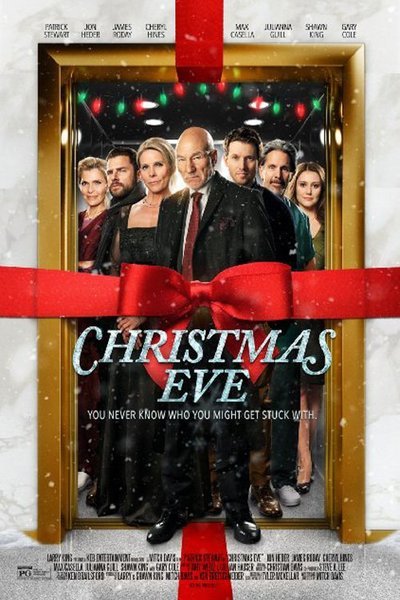 Rated PG for some peril, thematic elements and language.

James Roday as B