It’s taken over 50 years since his death for an authorized documentary on the musician John Coltrane. While I reckon that there were certain logistical hurdles to get over, I would not find the wait surprising even had that not been the case. Coltrane is a very big subject. He deserves a smart filmmaker to tell his story, and even the smartest of filmmakers might find that story daunting.

Director John Scheinfeld, who’s previously made docs on challenging subjects such as Harry Nilsson and Bing Crosby, is at least smart enough not to go into this subject in an intimidated, defensive crouch. “Chasing Trane” streamlines the story of the jazz saxophonist, but it does so in a way that doesn’t feel like cheating. Scheinfeld’s approach is to give the viewer the forest, point out a few trees and get out, confident that those trees will inspire the viewer to spend more time in the forest.

He begins “Chasing Trane” by hooking the viewer on some potent narrative. Instead of a slog through The Early Years, the documentary begins in medias res. It’s 1957, and Coltrane is riding high as the sax player in a quintet led by Miles Davis, the closest thing jazz has to a superstar now that Charlie Parker is two years gone. A series of stills of Miles and Trane, zoomed-in with a Ken Burns style, conveys how sweet it is to be in this band. And then, boom. Miles fires his tenor man for unreliability caused by drug abuse. A big blow. Which leaves a big question.

It’s then that we get the origin story, but since it’s been so well-contextualized, Scheinfeld can build it for speed. We learn about two crucial things: Coltrane’s roots in the American Jim Crow South and his pedestrian sax playing when he was in a Navy bebop band. The jazz critic Ben Ratliff observes that this isn’t the kind of playing in which you hear the roots of greatness. You hear nothing of the sort. But Coltrane’s desire for greatness drove him to practice like a fiend.

The movie has a great array of interviewees, and they all contribute something special. Coltrane’s children and stepchildren speak warmly of a generous, gentle man. Friends and fellow musicians—true jazz greats and legends—Jimmy Heath, Benny Golson, Reggie Workman, Sonny Rollins, and McCoy Tyner, the last being the only surviving member of Coltrane’s revolutionary quartet—express equal amounts of love and awe. Contemporary luminaries like Cornel West, Wynton Marsalis, and even President Bill Clinton weigh in on his importance. All that they say is correct and true.

And it is confirmed within the events of Coltrane’s story itself. Describing his and Coltrane’s path to junkiedom, Jimmy Heath says, “You’re in the club with the pimps and hustlers, and they tell you, here, take some of this, you’ll feel good. And you go for it and then you’re stuck.” Simple as that. But when Coltrane came to the cold realization that staying stuck was going to take his music away, he went through the agony of withdrawal and came out a changed man. The movie is full of Coltrane’s own words, read by Denzel Washington. They’re a good match. Describing his post-junkie state, Coltrane says simply, “I think better. I play better.” His thinking and his playing would compel him to push his music ever forward from the late '50s into the '60s, up until his death from liver cancer in 1967, at the ridiculous age of 40.

Scheinfeld’s movie depicts in detail some recording milestones: Giant Steps, a tune and an album that reveled in a harmonic complexity that still bedevils jazz players to this day; Alabama, his elegy for the victims of the 1963 bombing of the 16th Street Baptist Church by American terrorists; A Love Supreme, a jazz articulation of sacred music; Ascension, his free-jazz break from what had become to him the constricted mainstream. Critic Ratliff and author Ashley Kahn provide cogent descriptions, but as Sonny Rollins says, one can talk about the music but it’s no substitute for hearing. Fortunately, the movie itself folds a lot of Coltrane music into the mix.

“Some people play jazz. Some people play reggae. Some people play blues. [Coltrane] played life,” Carlos Santana says in one sequence. Later, he says “John Coltrane’s sound rearranges molecular structure.” He is not wrong. What Coltrane accomplished, not just by way of musical genius but also personal example, is truly awe-inspiring. As Cornel West puts it, speaking of Alabama, “Martin Luther King Jr. and Coltrane represent the best of the human spirit.” What emerges in this film is not just a great artist but also a noble soul that constantly sought to be gentle. The fact that someone as wholly beautiful as John Coltrane once walked this earth is enough to make you maintain some kind of faith in humanity itself. 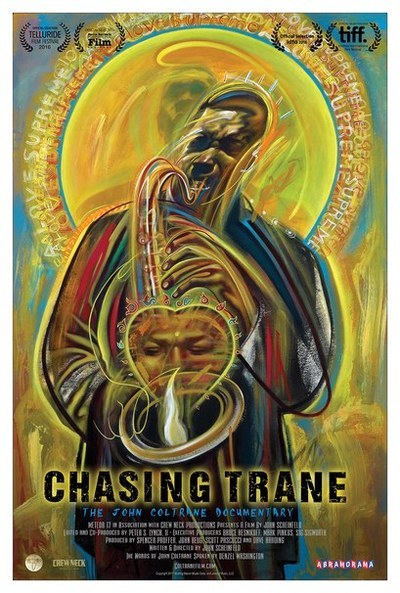