There's just not enough to "Charlie Says," an ambitious, but uneven drama about the oft-sensationalized "Manson Girls": Susan Atkins (Marianne Rendon), Patricia Krenwinkel (Sosie Bacon), and Leslie Van Houten (Hannah Murray). Director Mary Harron and adapting writer Guinevere Turner—who previously collaborated on "American Psycho" and "The Notorious Bettie Page"—effectively illustrate how murderer and cult leader Charles Manson ("Doctor Who" alumnus Matt Smith) not only brainwashed his followers but made them parrot and act out his self-serving, apocalyptic ideas. But "Charlie Says" loses much of its potency whenever it's not directly about the ordinary motives of the individual Manson clan members (the short version: they mostly wanted to be seen and loved by a commanding, hippie-like father figure).

Viewers are invited to join audience surrogate Leslie as she struggles to remember what led her and her accomplices to kill. But while Harron and Turner capably lead viewers towards an ever-looming (and, in the movie, literally represented) precipice, they ultimately yank viewers back to safety before "Charlie Says" can meaningfully shed light on its three protagonists' by-now notorious actions. By the time Leslie seems to be on the verge of a breakthrough (or a breakdown), Harron and Turner makes her deliver a trite little confession, and then rush us out of the theater with an equally tidy coda.

I left "Charlie Says" feeling dazed: how could Harron and Turner display such an unsentimental, but compassionate understanding of their anti-heroine characters' desires, only to pump their narrative's brakes, and leave viewers on such a flat note? How are we supposed to engage with these characters if all we really know about them is that their conditioning made them incapable of fully processing their own experiences, except maybe to withdraw and/or feel a picture-book sort of remorse? Who is this story for?

In Harron and Turner's narrative, the Manson Girls initially appear to be interchangeable parts of a whole; eventually, they appear to be confused individuals with barely developed personalities. Leslie is the closest thing that viewers have to an audience surrogate, since the movie's flashback-intensive narrative really begins and ends with scenes of her trying to assimilate into Manson's Spahn Ranch community, represented as a commune of hippies who were (mostly) united by their awe and attraction to Manson's pseudo-spiritual anti-authoritarian ideas (free love, psychedelic drugs, and, suddenly, oops, a race war).

Through flashbacks, we see that she's confronted (and therefore successfully broken down) as soon as she arrives and is pressured into dropping acid. This bullying strategy of indoctrination is repeated in various forms throughout "Charlie Says": supporting characters see, accept, and enact Charlie's doctrine. They're like inexperienced actors who struggle to find meaning in the punishing lines that they've been asked to read. Many times, Leslie's fellow cultists struggle to convince themselves that they're happier because they've cut themselves off from everything outside of Spahn Ranch. It's a credibly horrible power dynamic, especially if you've ever been in an abusive and/or co-dependent relationship: you hate yourself, but your partner sees you--so you want to believe that only they can fix you, even if you know that they can't.

Leslie's memories (mostly recreated through flashbacks) are understandably warped by Manson's ego-smashing ideology. "Be like a finger on a hand," she's told. That ideology soon becomes: "Be one consciousness." And then eventually: "We can kill him!" Leslie and her fellow Manson Girls are similarly confronted by Karlene during post-Manson prison scenes, most of which aren't as compelling since they're not as emotionally complex. But that puts a heavy burden on Leslie's point-of-view and her struggle to understand what she became.

The most devastating scenes are, unsurprisingly, the ones that are most explicitly limited by Leslie's perspective. We join her towards the end of a harrowing phone call with her mother, but never understand what led to that call home, or who, if anybody, told Leslie to cut her mother out of her life. All we know is that Leslie's mom is sobbing as she begs Leslie to explain her actions: "What are you talking about?! We're your parents!" But Leslie flatly refuses: "I need you to stop loving me. You're never gonna see me again." She hangs up with a subtle mix of self-satisfaction, fear, and relief (Murray's performance stands out among the movie's uniformly strong ensemble). Leslie's mom briefly returns later on, but her presence (and its relevance to Leslie's story) is also limited by Leslie's inability to empathize with anybody beyond a point.

Unfortunately, "Charlie Says" doesn't always seem to be told from Leslie's point-of-view. In fact, most flashbacks are only important as a means of establishing a hyper-generalized timeline of events, leading up to some of the Manson family murders, focusing mostly on the killing of actress Sharon Tate (Grave Van Dien), supermarket executive Leno LaBianca (Dan Olivo) and his wife Rosemary (Jackie Joyner). But any scenes that don't take place on Spahn Ranch feel insubstantial and relatively lifeless.

Turner's overstuffed narrative ultimately concludes by asking viewers to think about how we judge the guilty. But it's impossible to draw meaningful conclusions without a more nuanced understanding of what, exactly, the Manson Girls believed, how they processed Manson's words, and how Karlene was involved in their attempted rehabilitation. I wish Harron and Turner revealed more about their subjects, even as I recognize that the insights that they do provide make "Charlie Says" a worthy conversation-starter. 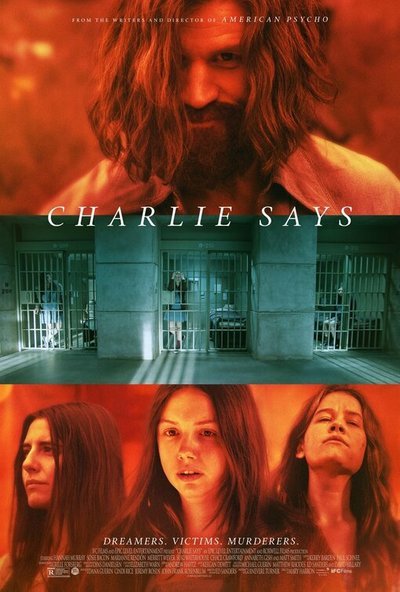 Writer (inspired by a book written by)

Writer (inspired by a book written by