A prescription high school comedy; emphasis on the 'high'

Remember the scene in "Juno" where Juno (Ellen Page) tells Paulie (Michael Cera) that he's cool without trying, and he heartbreakingly replies: "Actually, I try a lot"? Well, if that's true, the effort doesn't show, and that's precisely why Paulie's so cool, in his gentle, quietly geeky way. You can't be truly cool if you look like you're trying.

Charlie Bartlett tries a lot. He's been thrown out of every private school in the region for trying to make friends -- usually by coming up with some black market entrepreneurial scheme, like selling fake IDs. But it's high-quality stuff.

"I'm 17," complains the poor little rich kid, "and popularity is pretty darned important to me."

Things do not start off well on his first day in public school when Charlie (Anton Yelchin) wears a blazer and tie and carries an attache case. He gets beat up in the restroom by a big guy with a metrosexual mohawk named Murph (Tyler Hilton). Still, Charlie seems to spark some instant chemistry with Susan (Kat Dennings), an emo girl in the Drama Club, who also happens to be the daughter of alcoholic Principal Gardner (Robert Downey Jr.).

Charlie's solution to his popularity problem is to offer a prescription plan with universal coverage that surpasses anything Hillary Clinton or Barack Obama have promised. He gets psychoactive drugs (Ritalin, Xanax, Zoloft) from his various shrinks and doctors, and sells them to his fellow students, which elevates him to the status of a demi-god among high schoolers. Apparently the kids at this school are not already overmedicated.

From students to administration, everybody begins to speak his entire name -- "Charlie Bartlett" -- in a way that a previous generation uttered "Ferris Bueller" -- with a mixture of reverence and affection. Apparently understanding that drugs are most effective when combined with talk therapy, Charlie offers amateur psychoanalytic/confessional sessions in the boys' restroom stalls, for boys and girls alike -- an adaptation of the all-purpose drug, dating and counseling operation run by Clint Howard in "Rock 'n' Roll High School," but with less smoke and no Ramones. And he means well. He's providing a needed service.

Almost everything in "Charlie Bartlett" is based on successful teen comedy formulas of the '70s, '80s and '90s, like "My Bodyguard," "Fast Times at Ridgemont High," "Footloose," "The Breakfast Club" and "Say Anything." The romance between Charlie and Susan (which even has a Cat Stevens song for a theme) is basically "Harold and Maude" with a gorgeous teenage girl instead of feisty septuagenarian Ruth Gordon. Like many of John Hughes' high school movies, it presents a fantasy of tolerance and camaraderie about kids from different social circles -- nerds, jocks, hoods, cheerleaders, drama clubbers -- coming together to fight adult authoritarianism.

In "Charlie Bartlett," they rally to remove surveillance cameras from the tropical-clubhouse-like student lounge. Eventually, Charlie must deliver a speech similar to the one Graham Chapman gives to his religious followers in Monty Python's "Life of Brian," telling them that they don't need him to lead them and that they must learn to think for themselves because they are all individuals. "Yes, we are all individuals," you expect them to repeat in unison.

Anton Yelchin, the young actor with a name that evokes a Soviet leader, is appealingly goofy, with the slight build and pale complexion of the teenage Macaulay Culkin, and an '80s Kevin Bacon smile. His mom (Hope Davis) is a delightfully clueless and eccentric aristocrat who self-medicates with pinot grigio and pills. And Kat Dennings has the charm of an emo Ione Skye.

But, as you might expect, it's Downey as her drunken pop and principal who effortlessly dominates every scene he's in. There's no avoiding the intent behind the meta-moment when he acknowledges that being zonked out of your mind is a lot easier than dealing with your problems, or when he gets looped and waves a gun around. But after this and last year's "Zodiac," I'd like to see Downey play somebody who doesn't have an alcohol or drug problem, just for a change.

Jim Emerson is the editor of rogerebert.com. 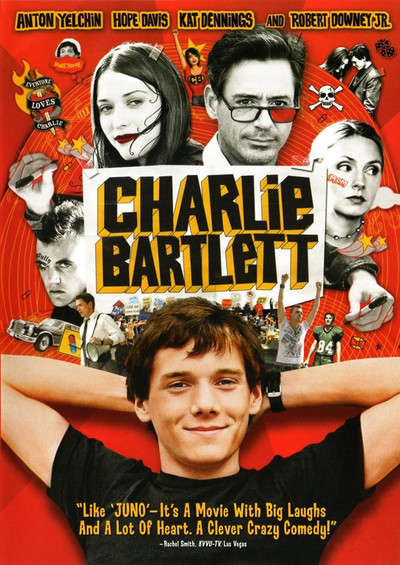