There is a terrifying moment in adolescence when suddenly some of the kids are twice as big as the rest of the kids. It is terrifying for everybody: For the kids who are suddenly tall and gangling, and for the kids who are still small and are getting beat up all the time. My Bodyguard places that moment in a Chicago high school and gives us a kid who tries to think his way out of it.

The kid's name is Clifford. He has everything going against him. He's smart, he's new in the school, he's slightly built. As he's played by Chris Makepeace, he is also one of the most engaging teen-age characters I've seen in the movies in a long time. Too many movie teen-agers have been sex-crazed ("Little Darlings"), animalistic food-fighters ("Meatballs"), or hopelessly romanticized ("The Blue Lagoon"). Clifford is basically just your normal, average kid.

He has just moved to Chicago with his family. His father (Martin Mull) is the new resident manager of the Ambassador East Hotel. His grandmother (Ruth Gordon) hangs out in the lobby and picks up old men in the bar. Life is great, backstage at a hotel (he gets his meals in the kitchen or some-times in the Pump Room). But it's not so great at school. The movie sends Clifford to Lake View High School, where he's immediately shaken down for his lunch money.

The extortionist (Matt Dillon) is the kind of kid we all remember from high school. He's handsome in an oily way, he's going through a severe case of adolescent sadism, he's basically a coward. His threat is that unless Clifford pays protection money, he'll sic the dreaded Linderman on him.

Linderman (Adam Baldwin) is a school legend, a big, hulking kid who allegedly killed his brother, raped a teacher, hit a cop, you name it. The movie's inspiration is to have Clifford think his way out of his dilemma neutralizing Linderman by hiring him as a bodyguard. This is genius, and there's a wonderful scene where Clifford springs Linderman on the rest of the kids.

Then the movie takes an interesting turn. Clifford and Linderman become friends, and we learn some of the unhappy facts of Linderman's life. It turns out Linderman isn't the Incredible Hulk after all he's just another kid going through growing pains and some personal tragedy. This whole middle stretch is the best part of the movie, developing a friendship in a perceptive and gentle way that's almost shocking in comparison with the idiotic, violent teen-agers so many movies have given us.

The ending is predictable (it's a showdown between Linderman and another tough kid). And there are some distractions along the way from Clifford's family. Martin Mull makes an interesting hotel manager, whimsical and charming. But the movie gets off track when it follows Ruth Gordon through some of her adventures, including a romantic collision with a hotel executive played by John Houseman. These scenes just don't seem part of the same movie: The hotel stuff is sitcom, while the stuff in the high school is fresh and inventive.

That seems to apply to the performances, too. One of the strengths of “My Bodyguard” is in the casting of the younger performers Chris Makepeace, Adam Baldwin, Matt Dillon. They look right for their parts, but, more to the point, they feel right. Dillon exudes creepiness, Makepeace is plausible while thinking on his feet, Linderman is convincingly vulnerable and confused, and there's another kid, the solemn-faced, wide-eyed Paul Quandt, who steals a couple of scenes with his absolute certainty that the worst is yet to come.

“My Bodyguard” is a small treasure, a movie about believable characters in an unusual situation. It doesn't pretend to be absolutely realistic, and the dynamics of its big city high school are simplified for the purposes of the story. But this movie is fun to watch because it touches memories that are shared by most of us, and because its young characters are recognizable individuals, and not simplified cartoon figures like so many movie teen-agers. 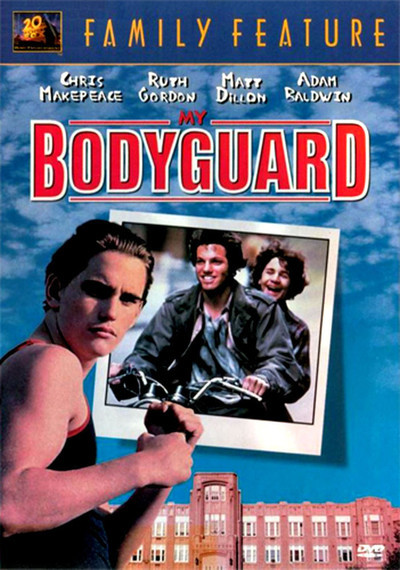