There is an entire subgenre of movie comedy in which a cantankerous, misanthropic, old man rants and raves about everything, saying totally inappropriate, unfiltered things and generally offending everyone he meets. Then, one day, he connects with someone who makes him see the inherent good in people, and he softens just enough to reveal the heart that’s been there, buried deep down, all along.

“As Good As It Gets” and “The Bad News Bears” are classic examples; the more recent “St. Vincent” and “Wilson” were less successful. Anyway, it’s a standard.

Take that character and put it in the body of a 19-year-old woman and you have “Carrie Pilby.”

It’s a clever idea with some self-conscious dialogue that probably played better on the page than it does on the screen; the debut feature from director Susan Johnson, with a screenplay by Kara Holden, is based on the Young Adult novel of the same name by Caren Lissner. But as the title character, Bel Powley is so enormously compelling that she breathes life into Carrie’s quirks and the story’s contrivances. And it’s clear that the women behind the scenes have great affection for Carrie in all her self-sabotaging imperfections.

Powley, who had a powerful naturalism as another precocious girl in her breakout role in 2015’s “The Diary of a Teenage Girl,” finds unexpected avenues into a familiar character type. Once again, her timing is just spot-on, and her screen presence is so appealing that she always keeps the film watchable, even when it’s not necessarily believable.

Carrie is the smartest person in the room at all times but she’s too miserable to enjoy it. She has trouble dating and making friends but she’s never at a loss for words. And while she has incisive analysis on the ready, regardless of the situation, she has a harder time understanding herself.

“What’s so great about being happy, anyway?” Carrie asks her therapist (Nathan Lane) in one of her weekly sessions, which give the film its narrative structure. “There are some brilliant, unhappy people.” But the therapist, who’s a longtime friend of Carrie’s wealthy, widower father (Gabriel Byrne), is well aware of what an unusual young lady she is. A native Londoner, Carrie now lives by herself in Manhattan. She skipped three grades and graduated from Harvard at 18. A year later, she works as a proofreader at a law firm but doesn’t really need the job.

She’s clearly lonely, though, despite the bravado she exudes to hide how she really feels about being a misfit. So the therapist, Dr. Petrov, makes a to-do list for Carrie to help her emerge from her alienation and find joy in the world: Make a friend. Go on a date. Do something you enjoyed as a child.

“Give humanity a chance,” Petrov says, in what may as well be the movie’s easily digestible tagline. “Someone might surprise you.”

Carrie’s subsequent, reluctant adventures involve a blind date with an engaged guy (Jason Ritter), an oversharing but well-meaning co-worker (an amusing Vanessa Bayer) and the obligatory boy next door (William Moseley), whom she meets cute while he’s playing a didgeridoo in the alley behind their apartment building. He might just be perfect for her, though; the two eventually get to know each other through a single-take, walk-and-talk around the city. “Carrie Pilby” is the kind of movie that seems warmly aware of its conventions.

At the same time, it offers glimmers of surprising depth, as in its flashbacks to Carrie’s ill-advised romance with her English professor (Colin O’Donoghue) when she was just 16. These serious scenes help flesh out her contradictions: the intellectual wisdom beyond her years coupled with the emotional maturity of a teenager.

Johnson keeps it all moving at a decent clip, though, with the help of Michael Penn’s score. And she photographs Powley and her mesmerizing blue eyes so lovingly that it’s hard not to find her adorable—even when she’s being awful. 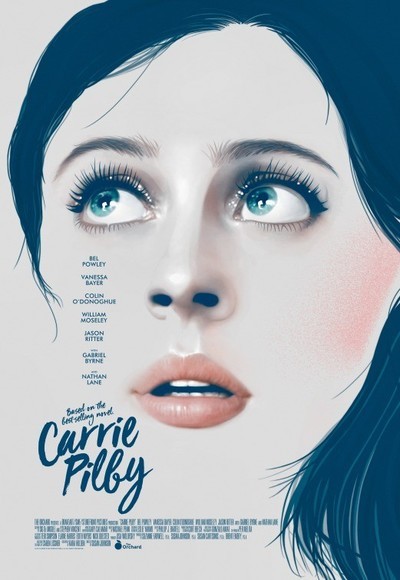