It's August 1968. Joy (Elizabeth Banks) accompanies her lawyer husband Will (Chris Messina) to a swanky partner's dinner and is drawn outside by the sounds of a violent protest. Joy hovers behind a line of policemen, in a stand-off with the yippies, all of whom scream in unison, "The whole world is watching!" Joy, protected from the social and political turmoil churning up the country, is shocked and frightened. But the openness of her face, its receptivity and curiosity, suggests something else might be present. She's more fascinated than repelled.

"Call Jane" opens with this scene, and while it doesn't connect explicitly with the main plotline it's an example of what the film does really well (and there could be more of it). Directed by Phyllis Nagy, with a script by Hayley Schore and Roshan Sethi, "Call Jane" takes place before Roe v. Wade, where women were left with no choice but to move into illegal and dangerous territory in order to make the choices they needed to make about their own bodies. (The timing of "Call Jane" is eerie, to say the least.) Joy's personal journey is important—and central—but, just like in the first scene, it takes place in a larger context, a context Joy has been able to avoid thus far. Through her own circumstances, she is drawn into a wider space where she finds capabilities that she never knew she had. In other words, "Call Jane" is not just the story of one woman. This is in the film's favor.

Joy and Will have a happy marriage, overall, and a teenage daughter named Charlotte (Grace Edwards). Joy is pregnant again and she can tell something's not right. Her doctor breaks the bad news: she has developed congestive heart failure, and the only way to reverse it would be (long pause) "therapeutic termination." Joy has a 50/50 chance of surviving the pregnancy. Joy and Will's comfortable complacent world is thrown into chaos. To get approval for the "therapeutic termination," the couple has to meet with the hospital board (all men). Joy comes with a bright smile and bearing a plate of cookies. The men talk about her as though she is not there and vote unanimously against the life-saving procedure. Joy doesn't want to die. Will is trying to hope for the best, but keeps saying things like, "I wish I could fix this!" He can't.

This is Joy's entryway into the Jane Collective, a group of women in Chicago who formed an underground organization to help women get safe abortions (complete with aftercare). ("The Janes," a documentary released in June of this year, tells the story of this group). Joy makes the call. A woman named Gwen (Wunmi Mosaku) picks her up, makes her put on a blindfold, and drives her to a location, where entryway is granted after a secret knock. The "procedure" costs $600, and the doctor, Gwen informs Joy, has a horrible bedside manner but "he's the best we've got." Dr. Dean (Cory Michael Smith) lives up to his reputation. Afterwards, Joy is blindfolded again and brought to another location, where she meets the rest of the "Janes." The leader is Virginia (Sigourney Weaver), a battle-scarred veteran of all kinds of cultural and political wars. She is tough, practical, and practiced at negotiating with shady characters, including the Mob (who provide low rents for their secret locations as well as, presumably, protection). Joy keeps insisting she's fine to leave, but Virginia lays down the law, and explains to her exactly what is happening to her body, and what she can expect in the coming days.

In other films about illegal abortions—Eliza Hittman's "Never, Rarely, Sometimes, Always," or Cristian Mungiu's "4 Months, 3 Weeks and 2 Days"—the story is of the quest to get the abortion. In "Call Jane," Joy's experience is wrapped up in the first half-hour. What then follows is the heart of the matter: Joy is drawn into the Jane Collective as a participant. It starts slowly. She's asked to pick up a new client and drive them to the location. At first, she balks. "I don't agree with what you're doing," Joy says to Virginia. Think about that. But slowly, she finds herself embedded, loaded down with more responsibilities than she at first thinks she can handle. Will, of course, is oblivious to what his wife is doing.

Phyllis Nagy has directed a movie for television, but this is her first feature. Her screenplay for Todd Haynes' "Carol," adapted from Patricia Highsmith's novel The Price of Salt, was nominated for an Oscar. She is sensitive to the details, and sensitive to what the story needs. The tone is a little uneven, and there are a couple of sub-plots that distract. Charlotte experiences a somewhat unbelievable character-shift, and the boozy next-door neighbor Lana (Kate Mara) feels extraneous, there mainly as a contrast and a reminder of the boredom of suburban woman in that tumultuous era. The needle-drops are on the nose (although Malvina Reynolds' "What's Goin' On Down There" is used to amusing effect), and sometimes the zippy peppy tone feels like an avoidance, rather than a confrontation. But Nagy is on steady ground where it counts.

It's time to talk about Elizabeth Banks. Banks has been doing good, and eclectic, work for almost two decades. Her breakthrough came in "The 40-Year-Old Virgin," where her part was small, but her performance was gigantic. In 2015, she appeared in "Magic Mike XXL" and "Love & Mercy," in two totally different kinds of roles, and she crushed it in both. "Love & Mercy," in particular, is the kind of performance that doesn't get a lot of chatter, but it should. It's not easy to be as open as Banks is in "Love & Mercy," where the entire performance is about how deeply and how closely she listens to others. It's amazing and moving work. In "Call Jane," she holds the center. She is so accessible to her own emotions, to the emotions of others. She is always thinking, taking things in. It all happens on her face.

"Call Jane" is reminiscent of the so-called "women's pictures" of the 1930s and 1940s, often starring Bette Davis, Joan Crawford, or Barbara Stanwyck, where a woman goes through trials and tribulations, battered about by fate, before emerging shakily on her own two feet. "Call Jane" is about an important subject, but it's also a character study of one woman waking up, not just to her own strength, but to the fact that she's hidden in the suburbs for too long. It's time to help others. It's a very satisfying character arc.

Sigourney Weaver hasn't had a role this meaty in years, and she inhabits it like a well-worn comfortable sweater. She's has so much authority onscreen: she's compelling, strong, but also gentle. There is an extraordinary scene between Virginia and Dr. Dean, when Virginia attempts to get him to lower the price he charges. The less said about it the better, but not only does it show Virginia's stone-cold chops as a negotiator, it reveals Dr. Dean as a much weirder and much more interesting character than he seems at first glance. People are not just one thing. People are not just attitudes. People can change. People are sometimes forced to change. Things are not always what they seem.

The timing is good for a movie like "Call Jane," although calling anything "good" about our perilous moment doesn't seem right. Despite the songs, the cars, the hairstyles, "Call Jane" doesn't feel like a "period piece" at all. 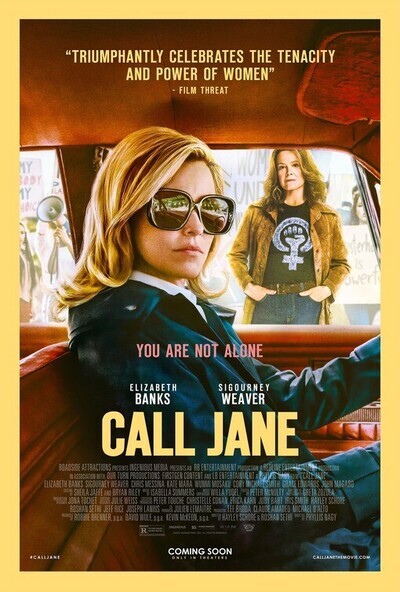 Rated R for some language and brief drug use.

Chris Messina as Will