The most heartening surprise about director Bill Pohlad’s “Love and Mercy” is also to my mind a pretty improbable one. That is, that it’s such a good and at times better than good movie. The rise and fall and rise and fall and rise of genius musician Brian Wilson, a life story that disproves Fitzgerald’s adage about there being no second acts in America in what seems like the most perverse way imaginable, looks on paper to be too sprawling, too chaotic, to be distilled into a coherent, never mind compelling, cinematic narrative of conventional length.

But longtime producer Pohlad (“Brokeback Mountain,” “12 Years A Slave”), working from a daring script by Oren Moverman and Michael Alan Lerner, and using two first-rate actors to play Wilson at two turning points in his life, lavishes his material with love, attention to detail, and empathetic imagination. The result is a story that’s hair-raisingly watchable and frequently moving, regardless of what you believe you might already know of Wilson’s life.

The movie shuttles back and forth between two distinct periods. In the mid ‘60s, Paul Dano’s Wilson is the baby-faced musical genius of the Beach Boys who’s burning out on the road life. He’s got this amazing music in his head, and he manages to get quite a bit of it out, despite the resentful sniping of his abusive ex-manager father, the hostility of at least one bandmate who doesn’t get why Brian isn’t writing more hits, and an increasingly fragile psychic state that is not helped by an exposure to LSD. Cusack plays the Wilson of the late '80s, supposedly brought back from a complete psychotic break by psychological miracle worker Dr. Eugene Landy, who became such a part of Wilson’s life that he presumed to make himself a partner in the creation of Wilson’s music. John Cusack’s Wilson wanders desultorily into a Cadillac dealership (although we soon see he’s got a bodyguard trailing him, and a mini-entourage trailing the bodyguard), charms attractive young salesperson Melinda (Elizabeth Banks), who at first has no idea who the sweetly eccentric fellow is. After telling her he wants the car in which they’ve stolen a few precious moments removed from the outside world, he scrawls on her business card and leaves it on the steering wheel of the car. The words he’s written are “Lonely/Frightened/Scared.”

Landy, played with terrifying intensity and smarm by Paul Giamatti, has by this point in time morphed from someone in service of Wilson to a malignant Svengali. His monstrous manipulations are bad enough in isolation, but when intercut with scenes of the younger Wilson shrinking at the disapprobation of the father—who beat him to deafness in one ear, but from whom Brian still craves approval—or the cousin/bandmate who hectors him over jokey song lyrics and musical direction, they are genuinely heart-rending and angering. The movie creates a rather effective suspense story: as Melinda gets closer and closer to Brian, under Landy’s paranoid gaze, one wonders just how much fortitude Mr. Wilson’s new love interest has, and if she has that fortitude, can she get what she needs to deliver Brian from what he describes as his “hell.” It gets pretty tense.

Meanwhile, back in the ‘60s, Pohlad and Dano and a host of excellent supporting players simulate the creation of such ground-breaking pop works as Pet Sounds and “Good Vibrations.” Usually fictionalized scenes of music-making are as convincing as cinematic depictions of painters painting (that is, not at all), so the very compelling scenes in which young Brian corrals the crack L.A. session players known as “The Wrecking Crew” into accepting and then conjuring his sometimes eccentric musical visions feel almost miraculous. And Banks, who brings equal notes of beauty-queen sunniness and Girl Scout rectitude to her portrayal of Melinda (who did, spoiler alert, become Mrs. Wilson after the events depicted in this film) has an interesting chemistry with the haltingly charming and sometimes tragically wrung-out Cusack.

The movie isn’t perfect: the hairpiece Giamatti sports throughout is so unconvincing that the filmmakers ought to have found away to make a joke of it. But even when Pohlad puts a foot wrong, he does so in an interesting way. This isn’t the kind of movie in which you expect to find a resonating allusion to “2001: A Space Odyssey,” and yet there one is. And while I have to say it didn’t quite work for me, I’ve got to give Pohlad credit for nerve. In any event, there’s more than enough of real value in the movie in spite of that. Not just its content, but its bedrock belief in people, in spite of all the awful things people can do. This philosophy is also a big part of Wilson’s music, a point that’s brought home as the end titles roll. 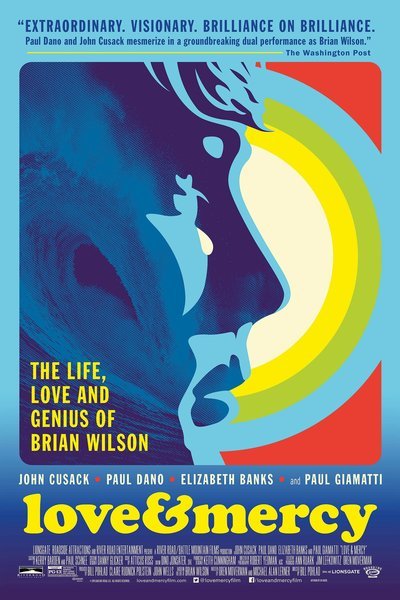