Summer is superhero season, so it seems only fitting that “The Janes” is coming out now. But it doesn’t feature brawny, larger-than-life figures swooping in to save the day; rather, it focuses on a group of women whose weapons are kindness and compassion, bravery and resiliency.

The documentary from directors Tia Lessin and Emma Pildes briskly tells the story of The Jane Collective, which helped thousands of women obtain abortions when they were still illegal in the late 1960s and early ‘70s. (The narrative feature “Call Jane,” starring Elizabeth Banks and Sigourney Weaver, covers the same territory and is due out this fall.) These courageous volunteers came from all walks of life across Chicago: artists and activists, wives and mothers. The Roe v. Wade Supreme Court decision of January 1973 legalized abortion nationwide and brought some relief. But the story of their daring remains frighteningly relevant nearly 50 years later as it appears that Roe is increasingly in jeopardy, providing an undercurrent of tension throughout.

Lessin (an Oscar nominee for “Trouble the Water”) and Pildes (making her directing debut) are wise to realize they don’t need to heighten the drama, though. They train their cameras on these women and let them tell their stories in matter-of-fact, clear-eyed fashion. Many of these anecdotes are horrifying, as you might imagine—stories of their own abortions, which they often had to secure through the mob at great expense at a middle-of-nowhere motel, or stories of other women they tried to help but couldn’t. Many of the Janes speak movingly of how poorly they’d been treated, so they wanted to make sure others felt safe and supported—that’s the powerful simplicity of their motivation.

The interviews are so vivid and engaging, however, that they frequently provide the excitement of a spy thriller. Women with ordinary names like Eleanor and Judith recount in extraordinary detail the lengths to which they’d go to connect with women in need: secret meetings and code words, rotating vehicles and locations. “Jane” is the pseudonym they attached to understated ads in underground newspaper and flyers they’d post throughout the city: Call Jane, they’d say, with a phone number. And on the other end of the line, there would be a woman who’d probably been in the same position at some point, ready to listen and help.

What emerges most impressively is their drive—their passion to stand up and rebel against what they perceived as an unjust law and put themselves in danger in the process. It wasn’t all that long ago, “The Janes” reminds us, that women needed to be married simply to acquire birth control. But the flip side of that is, so many more women were inspired to activism because of the civil rights and anti-war movements raging across the country and in this particular city. “That was the beauty of Chicago, I think,” says a Jane identified only as Peaches. “It was a town where people did stuff.” Lessin and Pildes sprinkle in rich archival footage to evoke this period of protest, and the Janes tell of how helping women obtain safe abortions felt like one more way to contribute during this volatile time. Photos of the Janes from back then—fresh-faced, eager and dedicated—brings a youthful vitality to the film. By the end, we feel like we know them—they’re our friends now, too. Conversely, scribbled details on stacks of note cards about the women seeking their services provide sharp jolts of reality. One is 19 and already has a kid. One’s father is a police officer. One is simply “terrified.”

But given how harrowing the stories frequently are, you may be surprised to discover some moments of humor, as well. The way these women stood up to the police, for example, or navigated the uncertainty of being thrown in jail alongside prostitutes highlights the absurdity of the situations in which they’d placed themselves. And the fact that they so often outsmarted the men in charge—or at least the men who thought they were in charge—is consistently amusing. This was a case in which being underestimated worked to their advantage, says a Jane named Katie.

A title card at the end of the film tells us the Janes performed about 11,000 safe, low-cost abortions between 1968 and 1973 before disbanding. Here’s hoping they never have to start up the collective again. 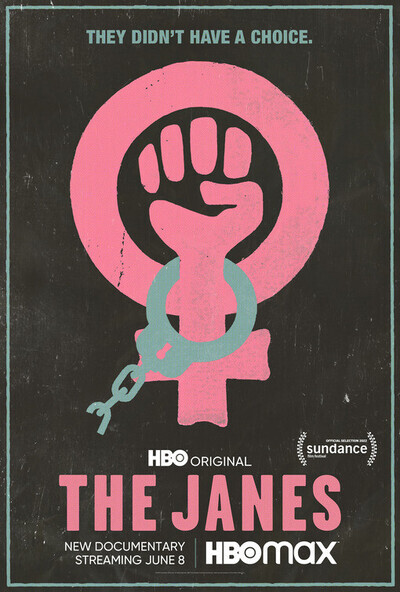 Heather Booth as Self

Judith Arcana as Self

Marie Leaner as Self

Diane Stevens as Self

Eleanor Oliver as Self