In co-writer/director Annie Silverstein's "Bull," its 14-year-old main character Kris (newcomer Amber Havard) is either overlooked or seen as prey by those around her. She and her younger sister live with their grandmother, who is ill and bitter. Her teacher notices that Kris has her earphones in during class but tells her, "I saw you, Kris, but I'm just to the point where I don't care anymore." The kids Kris knows are interested in her only when she can participate in partying, or better yet, provide a place for it. Her neighbor Abe (Rob Morgan) sees her as a nuisance because her dog gets into his chicken coop. An old friend of her mother's sees her as a possible asset for his opioid distribution. And Kris sees herself as the only one who can make a better life for her family.

Filmed in an intimate, documentary style, "Bull" is all the more heart-wrenching for its quiet approach to Kris' story. The characters don't or don't want to say much about what they are thinking or show much about what they are feeling. They lie a lot. But the patient, observant camera captures the sensitive performances by Havard and Morgan, and they are never less than eloquent and honest.

The people around her do not pay much attention to Kris, but she is a close observer, if not always able to understand what she is observing. At 14, she is still young enough that she believes her mother can find a way to get out of prison and move the family to what sounds like heaven to her, "a double-wide in Oklahoma," where they can live rent free if they do a little farm work. Kris has not yet had the lifetime of disappointment and broken promises her grandmother has. While she and her sister are delighted with her mother's plan, all her grandmother can say is, "Don't screw it up, Janis." In that prison visit, the shift in mood is understated but devastating. First there is the warm affection that could be a mother chatting casually with her daughters over breakfast. And then the maternal dynamic shifts to the resentment and distrust of the older mother toward the adult daughter who has let her down.

In the final visit to the prison, Kris has learned that her mother's dream is not going to happen. She has not yet learned that she cannot do it herself. The dream will cost $3,000. Kris is determined to get it. Silverstein captures that liminal moment when a young teenager is beginning to have some adult understanding but still clings to vestigial remnants of the magical thinking that she can be different.

To impress her friends—and to get back at Abe for threatening her dog—Kris has a party in his house when he is away. Her friends steal Abe's painkillers and create a mess. Abe calls the police, and her grandmother pleads for leniency. Kris thinks her pride is more important than her future and does not want to have to apologize. She asks the officers, "Can't you just take me to juvie?" But Abe says that if she will clean up the mess she made, he will drop charges. And she agrees.

So the neglected girl and the lonely rodeo rider-turned rodeo clown begin to develop a friendship. We learn more about Abe, particularly when he lies to his doctor to get a "release note," showing he is well enough to go back to the rodeo. He insists to the doctor that he did not black out when he was knocked down by the bull. "I just took my time getting up." And he gets a poignant visit from his ex (a terrific Yolanda Ross). He admits to her that he cannot give up the rodeo, even though he can no longer ride bulls.

"Bull" is reminiscent of quietly observed, beautifully performed recent films about lonely people finding some solace in animals like "The Mustang" and "Lean on Pete." Morgan gives his second superb performance this year following "The Photograph," and Silverstein shows us not just these characters' lives, but why we should care about them. 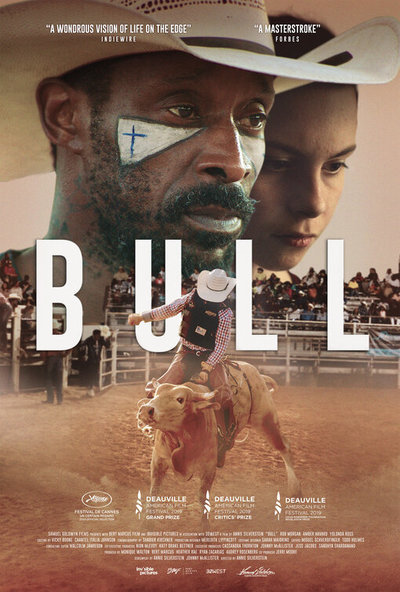