“I wish I was as good at love as I am at working. I wish I didn’t leave people behind so often.”

A young woman speaks those words of regret from the past. The camcorder information on the bottom left corner lets the audience know she’s speaking to us from 1989. As to why she knows such heartache is the story at the center of Stella Meghie’s romantic drama, “The Photograph.”

Once the tape clip is over, the story flips back to the present, where Michael (Lakeith Stanfield) meets Isaac (Rob Morgan) in rural Louisiana for an interview for his story on a photographer Christina Eames (Chanté Adams). Isaac says he knew the artist back before she became New York famous but doesn’t let on to how deep their relationship truly was—one of those smoldering affairs that almost changed the course of their lives but stopped short when Christina took off to the big city. Looking to fill out his assignment, Michael goes to Mae (Issa Rae), Christina’s surviving daughter who’s now an assistant curator at the Queens Museum. Now, he finds himself interested in more than just his source’s memories of her mother, joining the proud cinematic tradition of journalists falling for their sources. Michael and Mae effortlessly strike up a rapport and stir up feelings, even as their research begins to reveal more about Christina’s past life in 1984 Louisiana and the true identity of Mae’s father.

There is an A and B side to the narrative: the main meet-cute between modern lovers Michael and Mae and the nostalgic blast from the past between Christina and Isaac. The two stories share screen time throughout the movie as parallel tracks that eventually make a full circle. The two stories also weigh the similarities between the generations by interspersing traits and situations from one point in time to the next. For instance, Mae is often afraid to say how she feels, yet she has the same impulse as her mother to go after it. Michael shares Christina’s drive to pursue his career, something that once again threatens to tear the new couple apart if he were to land a new job in London. It’s unfortunate that Mae doesn’t have the same passion, but that would complicate the rather straightforward story. The script, which was also written by Meghie, is fairly predictable by genre standards yet still intriguing enough to watch as the two stories fall into place.

Although the stars are the movie’s main couple, it’s the B-side love story in Louisiana that won me over. Theirs is the more heartbreaking, high stakes conundrum. Christina feels the pull to New York but Isaac wants nothing more than to stay in Louisiana, and they split at the crossroads. Rae and Stanfield share some chemistry, but it never seems to quite settle and get to that honeymoon point of lovestruck infatuation. Rae always seems to have a bit of nervous energy, even when matched with Stanfield’s laid-back demeanor. It’s as if you looked across a restaurant and noticed a couple where a guy more into his date than she’s into him. Stanfield feels rightfully at home in a romantic drama. We can see his eyes light up when he notices her—like he’s looking at her for the first time. His body relaxes as he leans in to be even closer to her; the romance, at least on his side, feels palpable. Occasionally, Michael’s brother (Lil Rel Howery) steals almost every scene he shares, matching Stanfield’s chill attitude with Howery’s quippy responses.

Through cinematographer Mark Schwartzbard’s lens, “The Photograph” feels like a gentle throwback to romantic movies that left their audiences in good spirits as they filed out of the theater. Robert Glasper’s jazzy score adds a sultry finish to both love stories, tying together the past and the present. There are some rough notes in the film, but barring those, “The Photograph” is an enjoyable enough love story, and sweet enough to indulge in during a holiday dedicated to candy hearts. 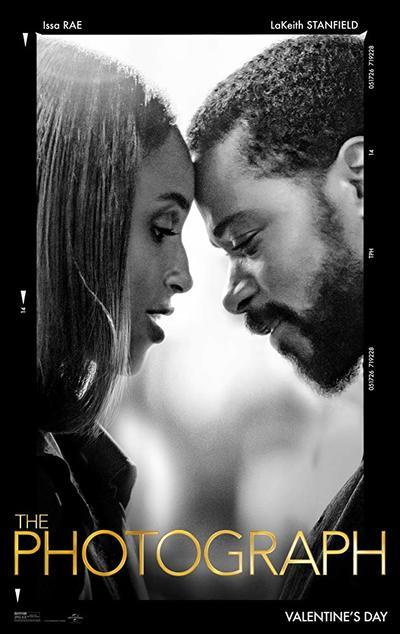