"Brightburn" is a body-count-style horror movie, only featuring a killer Superma—I mean young Clark Ke—I mean pre-teen alien who closely resembles a certain super-duper-hero who can't seem to catch a break in recent films. A machine to deliver gore and violence, "Brightburn" also features some of the most improbably and even hatefully dumb salt-of-the-Earth type characters in a recent American horror movie. But even if you watch "Brightburn" knowing that it doesn't have much going for it beyond a few disturbing kill scenes, you will still be disappointed.

It takes three deaths and one horrible maiming for anybody to call 911 about Brandon Breyer (Jackson A. Dunn), a gawky 12-year-old with super-powers and a temper. Granted, a local sheriff (Gregory Alan Williams) does show up right after Brandon's first (very public) act of violence. But generally speaking, Williams' laughably useless Sheriff Deever takes his sweet time while investigating Brandon. Merilee (Meredith Hagner), Brandon's aunt and school guidance counselor, isn't much more helpful: she texts her husband to say "Good night" seconds after her motion-detecting security alarm repeatedly goes off and Brandon shows up at her front door in the middle of the night, just to say that it wouldn't be a good idea if Merilee said anything bad about him to Sheriff Deever.

No, something's wrong with the people of Brightburn, though it's never really clear what. Brandon's parents, Kyle and Tori (David Denman and Elizabeth Banks), are especially unsure about what might be happening to their kid, even though they know that he's an alien—who, like Superman, mysteriously crash-landed when he was just a baby—and is therefore not completely familiar.

But for some reason, it takes a little while before Kyle and Tori notice Brandon's erratic behavior. That's the biggest idea in "Brightburn," I guess: Heartland Americans want to believe in innocence, goodness, and relatability so much that they presumably wouldn't notice an Evil Killer until it's too late, especially if Evil looks like a white male pre-teen. That's a great theme, but: Brandon's parents and neighbors are so trusting and loving that they're barely human at all. Maybe life is different in Brightburn, but it's hard to know how, given that so much of his story follows him, an obviously disturbed child, as he systematically murders everybody around him. What do we even know about the Brightburnians, other than they go hunting, they drink, they paint, and, in the case of Kyle and Tori, they have an adopted alien child? Apparently, Tori wanted to have a kid a lot more than Kyle did, but that's not apparent until the movie's almost over. That delayed response is not a trenchant insight about a certain type of person: it's just a patience-testing, but necessary plot contrivance.

These characters don't just make bad decisions because they're in denial: their constant failure to act like sympathetic, recognizably human characters is the only consistent thing about the people of Brightburn. I don't really know why, except that this movie was obviously made by horror fans who are trying to outdo/pay homage to their favorite splatter flicks. Beyond that: Brian and Mark Gunn's screenplay (produced by brother James) is a toothless, vague indictment of its ideal audience: hormonal fanboys who are just as likely to torrent a superhero bonanza, like the James-Gunn-helmed "Guardians of the Galaxy" as they would a gore-fest, like the James-Gunn-scripted "The Belko Experiment."

The Gunns' contempt for their characters is apparent throughout, but especially whenever Brandon stalks his victims. These scenes are formulaic, though they're at least well-paced and blocked. Still: how many times do you want to watch various Brightburn residents try to flee (always alone and without anybody else's help) and then get slaughtered by Brandon? We all know this kid is evil—because horror movies and true-crime podcasts exist in our timeline—but these flannel-and-jeans blue-collar types are too dumb to see Brandon for who he really is?

Knowing that you can only get off on the violence in "Brightburn" by adopting a smugger-than-them attitude casts an unflattering light on the film's end-credits stinger: a conspiracy-theory-touting pundit (played by a character actor who frequently pops up in Gunn's films) warns viewers about the dangers of superheroes on his InfoWars-style talk show. This isn't just a throwaway gag, it's a snotty, nihilistic joke at the expense of anybody who buys the sort of tin-foil-hat-style paranoia and cynicism that both Alex Jones and apparently the Gunn brothers employ for cheap laughs and personal gain. But if you're going to try to provoke viewers by turning Superman—a famously cheery and un-cynical character—into a symbol of modern-day depravity: you have to at least make me care about the people he's slaughtering in creative ways. Otherwise, I'm stuck with a few appreciably icky moments and a lot of dead air. 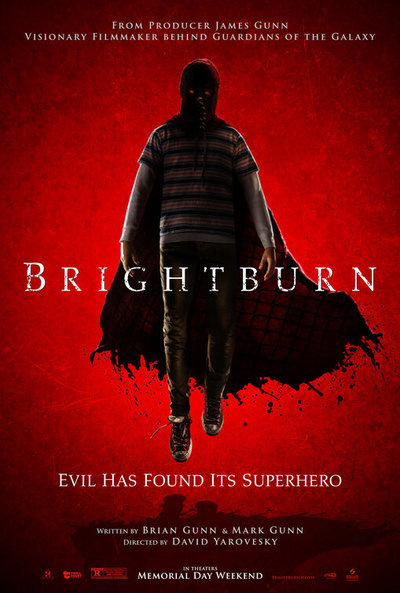 Jackson A. Dunn as Brandon Breyer