The quote at the beginning of “Brahman Naman” gave me the big laugh I’ve been needing the past few days: “All said and done, the young male, anywhere in the world, is a rather ugly and pointless evolutionary experiment.” This brilliant piece of self-deprecation is attributed to a person named Naman (Shashank Arora), who turns out to be the unwise main character in this teen sex comedy set in 1980s Bangalore, focused around some very horny young men on a high school quiz team. Owing some of its charms to other sex comedies from that decade, this Sundance 2016 title (now playing on Netflix) proves to be more layered than its promises of shenanigans may expect, especially as this is the rare sex comedy that doesn’t glorify the male gaze.

The tone of “Brahman Naman” is appropriately comedy-horror. With only a little narrative direction, it’s funny with its very perverse, all-fluids-included set-pieces, featuring young men who know everything in trivia but nothing about how to treat people, including women. The movie adds a distinct idea of entitlement to the sex comedy, with Naman’s caste status as a brahman giving him a thorough arrogance when interacting with others (his friends, or infantilized female friend Ash [Sindhu Sreenivasa Murthy]) that is always his downfall.

But director Quashiq Mukherjee’s unflinching portrayal of adolescence is appropriately mortifying about the horror of being a young male like Naman: crazy with hormones, completely brainless in what to do about urges for pleasure. The comedy goes beyond mere “American Pie” sight gags—when Naman devises a way to pleasure himself by tying his penis to a ceiling fan (your move, Philip Roth), the punchline isn’t so much the howl he elicits when his plan goes awry, but the idea that young men are jokes themselves.

A sex comedy about masturbation, “Brahman Naman” can be pretty funny, especially as his glasses-wearing friends (Tanmay Dhanania’s Ajay, Chaitanya Varad’s Ramu) and new addition Randy (Vaishwath Shankar), all with their shirts tucked and sharing the same clueless face, find themselves in over their heads when interacting with the opposite sex, drinking too much or fighting emasculation from other dudes. The shenanigans they get into (sneaking into an adult movie theater, going to a brothel, drinking a lot of booze) are ultimately hit and miss, but Q (as the director is known) has a sharp dryness and a quick energy that keeps his film unpredictable. Like Taika Waititi’s recent “Hunt for the Wilderpeople,” “Brahman Naman” has the foundation of dry indie comedy beats popularized by early-2000’s Sundance hits (“Napoleon Dynamite” lingers), but a raucousness that makes it very much an indie comedy of the new school.

Bracingly, sometimes Naman and his friends are truly grotesque in how they interact with or talk about women. While their schemes (peeking at a young woman’s underwear, or sneaking a kiss from another) always blow up in their faces, Mukherjee doesn’t hesitate to show how socially entitled young men must learn social boundaries. The film is colored with a few intentionally uncomfortable moments that speak to truths deeper than merely recognizing horniness, and its incredibly gratifying in the year 2016 to see a filmmaker directly confront his viewers about it.

“Brahman Naman” is grounded by how it treats the male gaze, exposing the pathetic lunacy of a desperate young man’s imagination (even a mattress commercial is sexualized in Naman's mind) and keeping their hormones in check. In the very fine line this film walks, Naman and his friends aren’t so unlikable that their film is intolerable, nor their adventures incurious. It sponsors a unique empathy, from audience and filmmaker: Mukherjee knows how terrible young men can be, but he believes that if they think beyond themselves, and start questioning whether sticking their penis inside a closed refrigerator is right or wrong, they’ll get the hint. 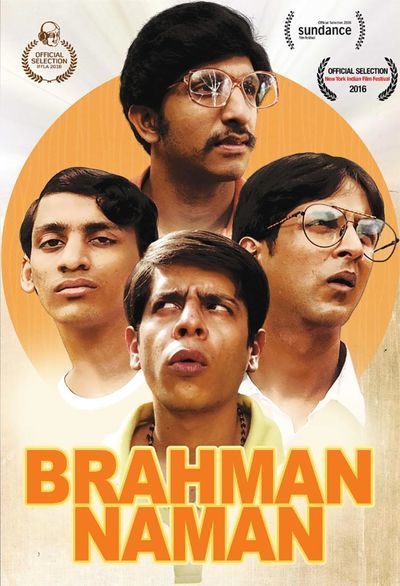