Five years ago, my RogerEbert.com colleague Steven Boone and I wrote a very long online piece on Tyler Perry. Neither of us sought to dismiss him, and I expressed much admiration both for how he built his own studio and for how brilliant actresses of color trusted him so passionately with their performances. But I found his direction to be extremely problematic. For example, there were moments in “For Colored Girls” where Perry was as bonkers and fearless as Sam Fuller, but he could never seal the deal in the visual way the cinematic medium needed.

As for Perry’s most famous character, Madea, I’ve always thought she worked better on stage, where her broadness plays to the back of a theater filled with fans expressing fellowship and jonesing on the Christian music and message of the plays. Unlike many of Madea’s prior movies, “Tyler Perry’s Boo! A Madea Halloween” didn’t originate as a hit stage play. The idea started as a joke in Chris Rock’s hilarious “Top Five,” where the latest Tyler Perry production has Madea fighting ghosts. Despite the mockery, Perry liked the concept and shot this movie in 6 days.

The idea of a supernatural addition to Madea’s litany of pet peeves intrigued me. I would have enjoyed seeing her cuss out demons and slap the taste out of the mouths of disrespecting spirits. Unfortunately, the only supernatural aspect of “Tyler Perry’s Boo! A Madea Halloween” is the “boo” in the title. Instead, the plot concerns itself with Madea (Tyler Perry) trying to keep her great niece Tiffany (Diamond White) from attending a Halloween party at the lamest fraternity I have ever seen. When things go horribly awry for the frat, they plot a Halloween-themed vengeance on Madea and her cohorts Aunt Bam (Cassie Davis), Hattie (Patrice Lovely) and Joe (Tyler Perry).

Madea’s nephew Brian (Tyler Perry, again) summons her to his house to keep an eye on his daughter while he’s out of town. He fears she will disobey his orders and attend the frat party. Brian is a doormat whom Tiffany disrespects in ways that would never fly in a Madea-run household. Tiffany’s behavior becomes the basis for the typical whiplash-inducing dramatic change in tone for which Perry’s films are notorious. Before we get there, however, we have to deal with the party, the pranks and the constant bickering between Madea and her crew.

I wish Perry had spent the time to craft some good scares, even if they’re supposed to be comedic. The trailer pretty much covers everything you’ll see in terms of Halloween-themed material. The entire frat subplot is Perry’s attempt to bring in a younger crowd (he casts several Youtube sensations), but outside of the moment when the elderly Hattie twerks to a Tyga song, these scenes are almost unwatchable. A scene with the frat inside a school bus is especially awful, offensively trotting out gay panic tropes that Perry unsuccessfully plays for laughs.

“Tyler Perry’s Boo! A Madea Halloween” fares better when it focuses on Perry’s broadly played cast of older characters. Joe, Aunt Bam and Hattie are good for several chuckles, though their director often beats their gags into the ground. Joe’s extremely gruesome descriptions of the corporal punishment he dispensed on his son, Brian, provides some squirmy, scary laughs. And Madea is at her funniest when she’s being unforgivably mean; her takedown of a trick-or-treater dressed like a cow is hilarious in its unflinching cruelty. Her line about having a “Ho-oh-one-K” instead of a 401(k) made me laugh so hard I embarrassed myself.

At 103 minutes, this film has way too much dead weight. Scenes are repeated over and over, and some of the acting would not cut it in a school play. But in the rare moments when “Tyler Perry’s Boo! A Madea Halloween” is firing on all cylinders, it displays a cleverness which hints that, with more time and a few more iterations of the script, this might have been a good movie. For the most part, the film has a rushed, haphazard quality that makes it feel like a selfish cash grab by its creator. But I know better; Perry’s love for his audience radiates off the screen and is returned just as powerfully by his fans. The real problem isn’t that he’s preaching to a built-in choir, it’s that the choir too easily forgives cinematic trespasses like this. That’s the Christian thing to do, I suppose, but I’m going to be a heathen here. Madea would understand. 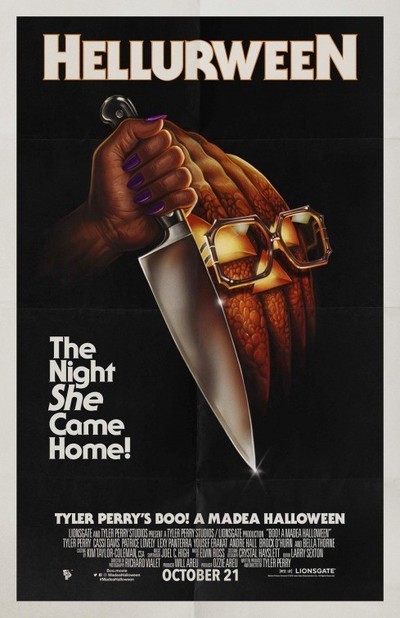 Rated PG-13 for drug use and references, suggestive content, language, some horror images and thematic material