Like the recent Chris Pratt/Jennifer Lawrence vehicle “Passengers” sans its giant spaceship or mortifying ethics, “Bokeh” takes that romantic sensation of feeling like the only two people in the world and challenges it with a literal interpretation. Is that the most vital feeling when in love? How important are our other loved ones, or even just other people, and could we live without them? This compelling, low-key sci-fi indie asks those questions and more, with the focused articulation of exciting talent across the board. Only worthwhile storytellers could take an elevator pitch like this one (the last two people on Earth) and produce long-lasting curiosity about its inherent beauty and horror.

There’s sturdy chemistry between rising actors Maika Monroe (“It Follows”) and Matt O’Leary ("The Lone Ranger") as they enact this nightmare, but this is more than a relationship movie. Jenai (Monroe) and Riley (O’Leary) are in Reykjavik, on their first vacation overseas. Their first morning they wake up, the streets are dead quiet and everyone in the land is gone. In some rough line-reading, they exclaim the gist of “What’s happening?!” or “There’s got to be someone here,” but after Jenai can’t make contact with her mom back in America, it becomes apparent—for some reason, whether it’s the rapture or something else, they are alone in the world.

“Bokeh” refers to the aesthetic quality of blurriness in photos, so no anxiety necessary (like I initially had) about some supernatural force or Icelandic monster third-wheeling this apocalyptic situation. Instead, writer/directors Geoffrey Orthwein and Andrew Sullivan keep the story interesting by making it about their differing ideologies during such a phenomena, creating thoughtful characters who see the world as either half-empty or half-full. Sometimes they’re on the same page, as they go shopping during a giddy montage, or find romance outside in places that would normally swarm with tourists. But it all comes to a head when Riley takes Jenai (who constantly checks her email inbox, missing her family) to see the abandoned corpse of a crashed plane from decades ago. He, an optimistic photographer who loves his old camera and the ugly images it can create, thinks it looks cool. She, however, as a pragmatist with a previous background in religion, sees it as an insulting symbol of where they are now. “We aren’t looking at the same thing,” she despairs. That statement is always true for the characters as they clash and come to terms with the world (and its a good reminder for the lovers in the audience as well).

Halfway through, “Bokeh” pulls back on narrative and pushes visual poetry, revealing its ambitions. At its best, these scenes proclaim talent with their ghostly, empty settings and lovingly-framed cinematography by Joe Lindsay, as gliding cameras, whimsical voiceovers and light pacing create a gorgeous atmosphere where you insert yourself into the story, wondering what you’d do—and want to believe—in this situation. At their worst, these showy passages with twinkling pianos and harps are an obvious bid for a Terrence Malick comparison, as if raising the ante on the “Song by Song” maestro by excising the whole world population in the final cut, instead of just main cast members.

There are other facets that don’t work quite as well, too, like a cheap burst of terror involving an elevator door or the fact that some scenes end abruptly, giving a literal definition to “Bokeh’”s filmmaking often being rough around the edges. And I would have liked to see Monroe’s character given more personality, but this film continues to prove that the “It Follows” breakout actress is destined for a significant career if she keeps believing in such ambitious, sharp scripts.

"Bokeh" is intimate, expansive storytelling from people who can do a lot with two actors and an empty city. And though it's not primarily a relationship movie, its delicate story does hammer home one thing in particular: that relationships are living organisms that must endure the most unpredictable of circumstances. Maybe in a non-apocalyptic world, Riley and Jenai would never even learn these things about each other, their collective fate much different than where "Bokeh" takes them. 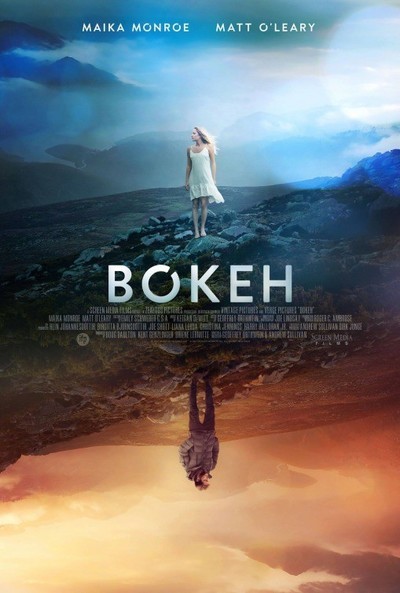