It’s lonely out in space, Elton John was able to observe as far back as 1972. Jim Preston, the character played by Chris Pratt in “Passengers,” learns this truth in a hard way. Jim is in a hibernation pod on the spaceship Avalon, headed from Earth to a colony planet called Homestead II, when the ship (which looks like a hybrid of a couple of crafts from “2001: A Space Odyssey” embraced by a helix) goes through a meteor shower. This jars the craft, and causes his hibernation pod to open. A little while after awakening, and enjoying the amenities of the giant ship—it carries 5,000 passengers to help colonize the new world, and is fully stocked for a four-month period during which the sleepers are awake to get acclimated to their soon-to-be-home—he realizes something terrible has happened. He was awakened after only 30 years in space, and the Avalon won’t get to Homestead II for another 89 years.

This freaks Jim out a bit. He does have one friend on the ship, an android bartender, Arthur, played by Michael Sheen. But Jim, an engineer, is not particularly bookish—had his character been more like that of Burgess Meredith in that “Twilight Zone” episode about the last man on Earth and a library, we would not have a movie here—so he runs out of high-tech things to amuse himself with over the course of a year. He drinks too much. Grows a beard. (Or, rather, Pratt is fitted with a very unconvincing beard, full Kurt Russell in “The Thing,” and it doesn’t suit the actor, at all.) And then he develops a crush on another sleeper, one who looks just like Jennifer Lawrence, and is played, appropriately enough, by Jennifer Lawrence. He learns about her—her name is Aurora Lane, she’s a writer, nobody in her life has ever noticed that her name sounds like that of a thoroughfare—dreams about her, and eventually makes a very ill-advised decision. He wakes her up.

He makes it look like an accident, he commiserates with her as she freaks out, and he cultivates their friendship. As Humbert Humbert once noted of a protégé of his, “you see, she had absolutely nowhere else to go.” Nevertheless, the movie is a little coy about developing their romance. But then again, the movie is always a little coy where it’s customary to be a little coy, just as it hits the most predictable beats while hammering its way to a conclusion that’s as egregiously contrived and corny as it is predictable.

This movie is directed by Morten Tyldum, who made 2014’s prestige picture “The Imitation Game,” and its direction is even more dutiful and personality-free than that of the Alan Turing biopic. The movie has a remarkably lumbering pace. The cliché-laden script—during one conversation with Aurora, Jim says “Can’t slogans be true?” which I reckon must be something screenwriter Jon Spaihts has asked in his own actual life—demands, of course, that Aurora learn of Jim’s deception. She does, and this was the point in the film when I felt compelled to look at my watch, and I was shocked to see we were only an hour into this 116-minute opus.

Despite their individual charms as performers, Pratt and Lawrence have very questionable chemistry. No matter how buff Pratt gets, his performing mode has an ineradicable “which way did he go, George?” haplessness to it, but that haplessness has some entitled bro notes as well. This makes Jim’s heinous action—“You murdered me,” an indignant Aurora screams at him, and she’s completely right—play even more despicably than had Jim been played by any actor with a genuinely creepy aura.

It gets worse. As their romance was blossoming, the ship’s systems had, unbeknownst to them, been failing. Things get really bad just as another figure, a casting choice that I’d like to think was a tribute to Paul W.A. Anderson’s “Event Horizon” but is probably just a coincidence, turns up to give some advice on fixing the craft’s nuclear core, and other stuff. “We’re stranded on a sinking ship,” Aurora observes, but the pair engages in all manner of Mr. Fix It derring do, complete with explosive bolts flying around and various sacrifices being proposed, made, and then rescinded by filmmakers committed to nothing more than letting Aurora and Jim have the very best make-up sex ever.

The movie’s production design is polished to the point of looking chintzy, and the special effects—well, let’s just say as elaborate as the movie’s zero-gravity sequence is (it involves an entire swimming pool’s water rising out of it’s enclosure, wowie-zowie), it reminded me of how much better “2001” did it. And I’m not even going to discuss, in detail at least, the elephant in the ideological room that “Passengers” inhabits, which is its spectacular sexism. The coeval to which is the movie’s sadistic requirement that Lawrence’s character swallow what’s been done to her by way of Pratt’s character proving himself “worthy.” Even if you believe in forgiveness, the way this movie stacks the deck to get to that place is, well, unforgivable. 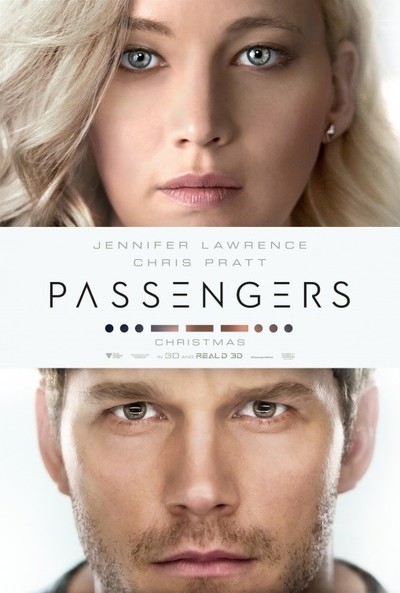