Blood on the Mountain

“Blood on the Mountain” recognizes in the historic exploitation of West Virginia coal miners what “Inside Llewyn Davis” did about folk music: “If it was never new, and it never gets old, then it’s a folk song.” It's about coal mining as a way of life for generations of families, and the corruption that has become its own parallel tradition. With an impressive historical scope, "Blood on the Mountain" is a documentary with information that rhymes, of workers who themselves become destroyed natural resources, often at the greed of political and industrial figures who render miners and their families as disposable. The poetry of this fascinating film from co-directors Mari-Lynn Evans and Jordan Freeman comes from its seamless assembly of decades-spanning footage, which displays generations through various film formats. Whatever the time, the images of miners, their work environment and their families remain the same.

The plot of "Blood on the Mountain" is that it's a heartbreaking history lesson about a land of opportunity where Americans take up livelihoods that kill them. The main character is West Virginia's coal mining community, as they are in a state of constant struggle, whether at the beginning of the industry when towns were built to service the newfound natural resource, or later when they formed unions, or battling non-union workers who wanted to take their jobs in the middle of protests. Throughout these chapters, of course, is coal's toxic nature, destroying the lungs of workers, or creating mountains of waste controlled by dams that have been known to break (as with the Buffalo Creek flood in 1972, which killed 125 people). Evans and Freeman's film richly depicts this messy, perpetual state of inhumanity, but does so with a very clear mind and a big heart, reaching out to the viewer with captivating journalism.

"Blood on the Mountain" is wide-ranging across time, driven by talking heads and select footage, but it nails the human element at its core. It savors the visual poetry to be found in place where a person’s existence depends on their bodies instead of their minds, offering numerous somber shots of small towns dwarfed by coal rigs, or mountains of coal overlooking homes. Comparisons and overlap happens with another unforgettable coal miner documentary, “Harlan County, U.S.A.” This movie achieves the same power as Barbara Kopple’s essential American film, though with a wider historical expanse and with less focus on people.

“Blood on the Mountain” is most impressive for how it creates that human idea without getting us to know miners too personally; any other documentary would find select subjects to follow around. Its focus is the state of West Virginia, more than any specific towns or different mines. There are names that come back and forth, but they're often the villains, like Massey Energy CEO Don Blankenship, or various government officials who are shown in footage, all with the same appearance—smart, middle-aged, white, male. Eventually the harmful companies start to all sound the same, often with a failed promise of pride in their title—Patriot, Freedom. And while some talking heads speak about the history in the mines, others share their personal, sobering experience (“We don’t know the ones we save, we know the ones we lose”). But the effect is akin to shots of a conventional hall filled with men and women, wearing camo-colored union shirts, waving their signs of protest. You don't know anyone personally, but with this doc you understand who they are as a people, and you empathize with them, intensely.

In a way that might not work for some, "Blood on the Mountain" also doesn't ask the question, "Why coal?" an inquiry that could go towards the workers, or the people who eventually get caught sacrificing lives for money. It seems like a question that you can trust the movie avoided intentionally, respecting this story's place at the very beginning of the coal energy cycle. In the same way that it's not a doc that explains what happens to coal after it leaves the mine or how much we waste it, it's a doc about presenting the chaos at the beginning. Like its talking subjects, who each speak from the heart with decades of knowledge or first-hand experience, there is a thick air of careful consideration.

Another distinct facet of this documentary: As soon as it was over, I wanted to watch it again and did. The stakes are potent, the stories are fascinating, and the themes are present like an incredibly raw drama, with nothing hammered in. A project that many history documentaries should aspire to, "Blood on the Mountain" has much to think about, learn from and never forget. 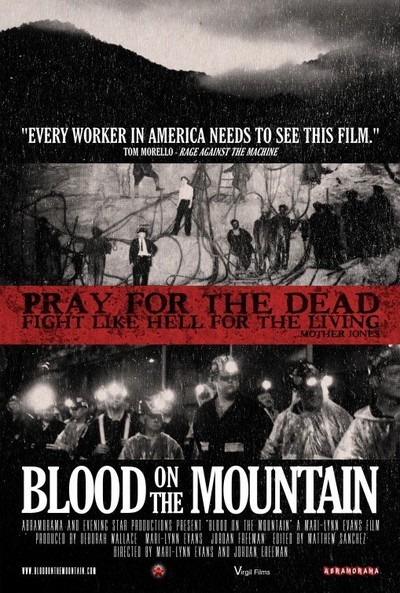