For an hour, Lucky McKee’s “Blood Money” is aggressively annoying, the kind of film with no likable or believable characters, and one of those cheap VOD flicks in which it feels like everyone was there purely for the paycheck. The final 20 minutes of this B-movie reveal why a few talented people were interested in making it, but it’s too little too late by that point, especially since most people who watch this at home will have moved on to something else anyway.

Victor (Ellar Coltrane of “Boyhood”), Jeff (Jacob Artist) and Lynn (Willa Fitzgerald) are going on a rafting trip but bringing enough baggage with them to sink their boat. The three are old friends but Jeff is “with” Lynn now, although they’re trying to keep that a secret from Victor, who may or may not have a crush on Lynn. Sadly, most of this early character exposition is clunky and inconsistent. The dialogue alternates between unbelievable and moronic, and the actors don’t do enough to make this trio of idiots easy to root for. Far more interesting is the criminal Miller (John Cusack), who’s dressed like a “Metallica groupie” and looking for the millions of dollars he just stole, parachuting with it out of a plane D.B. Cooper-style. One can guess who finds the money.

In a nod to the long history of fiction and films in which money divides unions—the film is reportedly loosely inspired by “The Treasure of the Sierra Madre,” believe it or not—Jeff, Lynn and Victor have a tough time agreeing on what do with the found fortune. Good guy Victor immediately wants to turn it in, knowing that no good can come of bags of money found in the woods. Lynn has other ideas. Screwed over by a bad knee that has derailed her future, at least in her mind, she sees the money as karmic justice for the shit she’s had to put up with, and “Blood Money” gets way more interesting when Lynn’s search for retribution gains a bit of a gender-edge. Fitzgerald totally sells a great scene in which Lynn rails about how she was an equal friend of Victor and Jeff’s until she hit puberty and became property to fight over. I wish “Blood Money” invested more time and energy in this theme of male possessiveness, especially earlier, when the film feels unfocused and uncertain.

Part of that first hour feels borderline incomplete. The dialogue is clunky in such a way that you’ll think your DVD skipped a few seconds, and the characters are weirdly inconsistent. There’s an “exposition while the kids drink a few” scene early on that is bafflingly written and edited. The rhythm is all off. And McKee, so good at bringing tension and atmosphere to “May” and “The Woman,” can’t get excited about this material. It’s filmed in a flat, dull way that brings nothing to the piece. When you start to wonder if the film is making continuity errors—I swear it goes from overcast to sunny and back again a few times—you know something’s wrong. As for Cusack, he’s having a little bit of fun, but this is closer to the paycheck roles he often takes than it probably should have or could have been. As “Blood Money” becomes more and more about two dummies who really don’t get the woman they’re fighting over, it becomes more interesting. It’s just too far down the B-movie river to be saved by that point. 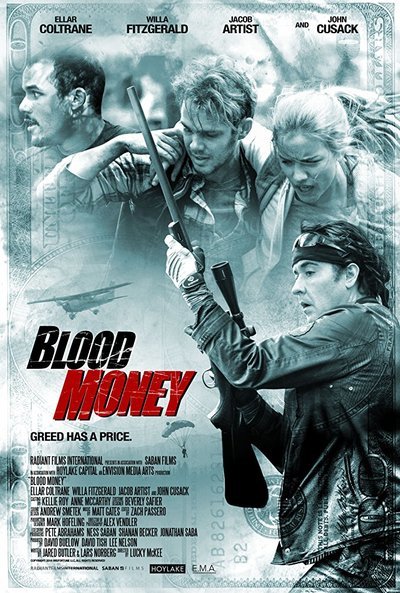 Rated R for language throughout including sexual references, and for some violence.