Michael Mann is an action filmmaker even when his characters are standing still. His movies contemplate themselves: they are simultaneously about what's happening and what it means. They're sensitive to the intellectual and emotional undercurrents swirling around the characters, whether they're running, driving, punching and shooting, or just brooding in close-up while electronic music shimmers and drones.

All of which makes him an oddly ideal director for "Blackhat," a solemn, grandiose, often ludicrous thriller in which "Thor" star Chris Hemsworth plays a buff computer hacker helping a joint team of FBI and Chinese intelligence agents chase cyberterrorists through Chicago, Los Angeles, Hong Kong, and Jakarta. Slick and sometimes goofy as it is, "Blackhat" is an odd, fascinating movie: a high-tech action thriller about the human condition. I can think of no better current illustration of the notion that, to quote this site's founder, it's not what a movie is about, it's how it's about it.

"Blackhat" is far from a perfect movie, mind you. Its rock-solid confidence in technical details isn't matched by similarly exacting attention to plot mechanics. Key roles are miscast or underwritten. Hemsworth's character, Nicholas Hathaway—a keyboard wizard furloughed from prison to help catch cyberterrorists who are stealing fortunes and wrecking nuclear plants—is implausibility Exhibit "A." "Blackhat" contrives a biography to justify this genius autodidact who reads Michel Foucault after lights-out, delivers mirrored epigrams in a Noo Yawk accent ("I did the time; time isn't doing me"), has Thor's chest and abs (push-ups, baby!), and can fight and shoot like John Wick and navigate irradiated nuclear plants in a hazmat suit. Despite Hemsworth's magnetism, Hathaway remains more a checklist of awesome than a credible person. The same is true, to a lesser extent, of his partners in justice, a racially and internationally diverse bunch. Their ranks include the sensitive/fearsome brother-sister duo of Chen Dawai (Leehom Wang) and Lien Chen (Wei Tang) and FBI agents Henry Pollack (John Ortiz), Mark Jessup (Holt McCallany) and Carol Barrett (Viola Davis). More so than in most Mann pictures—and this is saying a lot—these characters are more often lit and posed than explored.

Sometimes this feels like the right approach. The film spares us the usual "partners hate each other at first, then learn to work together" cliche by establishing that Hathaway and Chen were college roommates who love and respect each other; their embrace after reconnecting is shorthand that lets us instantly accept their Crockett-and-Tubbs-styled two-brained hive mind. The semi-obligatory love story between Hathaway and Lien is a  Wong-Kar Wai oasis amid the snooping and chasing, all sexy smiles and furtive embraces. Leehom Wang's elegance is intoxicating: he glides across the screen like a dancer, necktie rippling.

Other times, though, you'll wish "Blackhat" had given every character another minute or two of attention, to make them pop like the crooks and cops in "Heat" and "Collateral." If you buy them anyhow, it's because the actors have committed to the movie's hallucinatory intensity while still projecting eccentric, personal qualities (Davis is a standout; her side-eye could be registered as a weapon), and because this is a rare thriller that creates a worldview to go with its world.

You could call this movie "Michael Mann's Greatest Hits" and mean it as a slam or a compliment, depending on your feelings about the director—but all the hits have been remixed and rethought. As written by Mann and Morgan Davis Foehl, photographed by Stuart Dryburgh ("The Piano," "Ameila"), and cut by a team of editors, "Blackhat" has enough fighting, shooting and brooding to satisfy fans of "Collateral" and "Heat," plus a bumper crop of trademark Mann images: daytime and nighttime skylines, existentially empty roads, cops and criminals posed against post-industrial landscapes, soul-mates having deep conversations in restaurants, reflections in rear-view mirrors and picture windows, brazenly off-center closeups, bespoke suits and designer sunglasses. These Mann-erisms feel newly poignant because they're celebrating light, space, architecture and flesh, even as the movie's heroes obsess over virtual conspiracies, and keep an eye peeled for coldblooded killers dispatched by hidden masters.

The world of ones and zeros that the "The Matrix" showed us 15 years ago is no longer fanciful. "Blackhat" is mainly about what happens when the real world is annexed by the virtual: what it does to geography and relationships; how it signal-jams our species' sense of time as a series of self-contained moments, and substitutes an existence that can feel like an endless, intrusive buzz. When "Blackhat" goes silent—as when the camera settles on lovers' hands in post-coital closeup, or when the newly furloughed Hathaway pauses on airport tarmac and savors the open space—it's powerful, because you've been given a gift rarely bestowed in the world beyond the movie theater: a moment's peace.

The movie is a sound and light show, first and foremost, but it's also a sneaky eulogy for a dying way of living and seeing: rage, rage against the dying of the real! The filmmaking prods you to contemplate the physicality, the tangibility, of what's onscreen—to think about actions as actions, people as people, things as things. Sunlight and streetlamps are searingly bright, gunshots are deafening, landscapes and skylines awesomely vast. When men grapple in a cramped diner and someone's head smashes against a table, or when Hathaway repeatedly slams the flat end of an axe-head against a metal screen, or when bullets rip through a cargo container or a screwdriver plunges into a man's neck, you flinch, not just because the sound effects are loud and the camerawork tactically "messy," but because these primordial actions are contrasted against the electronic violence carried out by unseen cyber-criminals. The bad guys don't directly assault existing facilities, organizations and institutions; they undermine or confuse them until they implode, bringing in gunmen only when absolutely necessary.

The film's prologue is the best example of virtual treachery causing actual mayhem. It's a gem of wordless exposition that finds a visual/metaphorical way to explain how hackers slip past electronic firewalls and spread a malware virus into nuclear plant's computer system, shutting off cooling fans and causing core rods to overheat. You don't have to know much about computers to understand what's happening. You can figure it out by watching CGI images of pulsing dots swimming through fiber-optic cables and circuit boards (in point-of-view shots that evoke a Stalker Cam in a horror film or the shark in "Jaws"), then spreading and multiplying like cancer cells.

There are more such moments connecting the virtual and "real," like the scene where Hathaway intuits that somebody's spying on him and a colleague in a restaurant, then gets up from the table and wanders through the service area (in a long, unbroken handheld shot) until he locates the surveillance camera control board that's feeding images off-site. The movie's climax is a time-machine trip, catapulting us from the 21st century to maybe the 18th. It's intimate, emotional, vicious: flesh is punctured, blood spilled. As Davis' character puts it: "Is that tangible enough for you?" 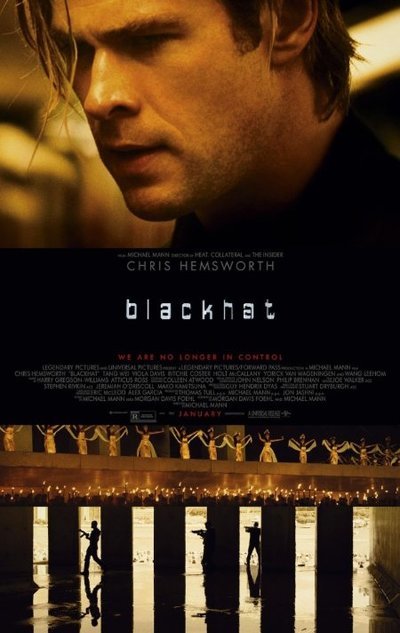