There’s an added poignancy to the year-plus delay of Marvel’s “Black Widow,” finally ending July 9th when the film will be in theaters and available for a premium charge on Disney+. And there’s a palpable sense that this story would have felt a little delayed even in May 2020. After all, why did Thor, Captain America, and Iron Man get three standalone films before Natasha Romanoff got one? Fans complained long before the pandemic that it felt like Black Widow was getting pushed aside, only given her own adventure after the end of her story in “Avengers: Endgame.” Director Cate Shortland’s movie confirms that Black Widow could have carried her own flick ages ago. There’s enough character, back story, and intrigue in her world for a whole series. A lot of movies in 2021 have felt a bit different because of their existence in a post-COVID world, but for all of these reasons, “Black Widow” feels distinctly like a pre-COVID product, a dip into the history of one of Marvel’s most popular characters that’s truly better so very late than never.

The best aspects of “Black Widow” echo the ‘70s spy movie tone of one of the best films in the MCU, “Captain America: The Winter Soldier.” Director Shortland and writer Eric Pearson (an MCU vet behind both “Avengers: Infinity War” and “Endgame,” along with Thor, Spider-Man, Ant-Man films and the ABC TV shows) unabashedly pull from beloved action and espionage classics with elements that echo the Bourne films, “Mission: Impossible,” “The Manchurian Candidate,” and, most of all, James Bond (a clip from 007 even plays on a television in the film). And yet “Black Widow” incorporates all of these spy-action greats into something that feels alive and original on its own terms, thanks largely to tight action choreography by Shortland and a great cast that centers four very engaging performances from Scarlett Johansson, David Harbour, Rachel Weisz, and, most of all, Florence Pugh.

“F9” may have a lock on the word “family” this season but it’s also the main theme of “Black Widow.” Natasha Romanoff is on the run from one makeshift family when she’s thrust back into the arms of another. The film opens with a scene right out of “The Americans” as it’s revealed that a young Natasha and her sister Yelena (played as an adult by Pugh) had a brief life in Ohio under parental figures Alexei (Harbour) and Melina (Weisz). They seemed like a normal family, but ‘mom’ and ‘dad’ were really Russian spies, and the girls were only being prepped for their coming induction in a super soldier program back in the homeland. After an explosive opening, the credits for “Black Widow” reveal that Natasha and Yelena were turned from average girls to killing machines, separated when Romanoff murdered the head of the program, Dreykov (Ray Winstone), and destroyed his Red Room. Or did she?

Jump ahead to just after “Captain America: Civil War,” when Natasha is on the run from her own government, underground after violating the Sokovia Accords. While she’s off the grid, she receives a package from Yelena, who is suffering through her own forced exile after discovering a substance that releases the Widows from their chemical subjugation. It’s very intentionally a reversal of the super-soldier serum concept that drove the action of projects like “The Falcon vs. the Winter Soldier.” Wherein Bucky Barnes stories often centered on vials that could make ordinary men into killing machines, “Black Widow” centers on vials that can turn killing machines back into ordinary women. Yelena sends a case of the vials to her sister, knowing it will bring her to a safe house in Budapest. From there, they are forced to break Alexei, aka The Red Guardian, out of prison and eventually reunite with the Black Widow who really made them, Melina.

Like a lot of the MCU, “Black Widow” is a bit thin in the villain department—new ads have highlighted the inclusion of the Taskmaster, a killing machine who can mimic its enemy’s fighting skills, and those scenes do stand out in terms of action, but parts of the film lack the urgency that would have been provided by a stronger enemy. Having said that, Shortland knows how to keep “Black Widow” more sleek than a lot of other MCU directors. It’s a more driven film than we often get from the MCU, deftly moving from one action set piece to another, only losing its momentum in a couple scenes—an extended family reunion and one of the talkiest showdown scenes in history in the third act (although one almost wonders if Shortland and Pearson aren’t parodying the Bond films again here with their legacy of monologuing bad guys). It’s not often the case in the MCU, but the pace is an asset here as “Black Widow” tells a relatively simple story with significantly less fat than a lot of other superhero flicks. It makes sense that a no-nonsense killing machine like Black Widow should have a no-nonsense installment, but it’s nice to see it actually happened.

That’s not to say there aren’t a few diversions for character and some interesting playing around with themes. There's a fun duality to "Black Widow" that should make returns to other projects in this universe more engaging. It purposefully echoes themes of covert government programs from projects like "Winter Soldier," revealing that the Americans don't have the market cornered, and it also deepens Natasha's life-long battle between being a lone wolf and needing a pack with which to run. Much was written about how "WandaVision" made previous MCU projects richer and there are elements of "Black Widow" that should do the same not only for Johannson's previous projects but for Pugh's going forward. It's a standalone film that doesn't just exist in a vacuum but enhances the films in which Black Widow stood with others.

On that note, hardcore fans of Romanoff may be unhappy how much spotlight she cedes here to the other members of her family, particularly Red Guardian and Yelena, but both actors are good enough that complaints shouldn't land. Harbour’s take on Russia’s version of Captain America is a clever one, finding just the right balance of humor and bravado—countering his performance here to his one in this week’s “No Sudden Move” reveals a significant range for an actor who feels like he’s on the verge of a remarkable decade of work. However, the film really belongs to Pugh, who nails every single line reading in a project that’s clearly designed to hand the baton off from Johannson to Pugh, who will appear in Disney+’s “Hawkeye,” in much the same way that Captain America’s shield went from Steve Rogers to Sam Wilson. Pugh proves more than up for the challenge, finding just the right shades of strength and vulnerability. It’s a top tier MCU performance and the film’s MVP.

As with a lot of the MCU, the third act here gets a little cluttered and repetitive but then the film recovers with a remarkable final action sequence that sends characters and debris hurtling through the sky (an MCU staple but Shortland’s choreography makes it feel urgent again). It’s ultimately a film that works on its own terms, a long-delayed enriching of the story of a beloved character that will make her ultimate sacrifice in “Avengers: Endgame” feel even more powerful in hindsight. Every blockbuster this Summer is being touted as the sign that the world is back to normal—“Black Widow” is more a reminder of what fans loved before it shifted off its axis. 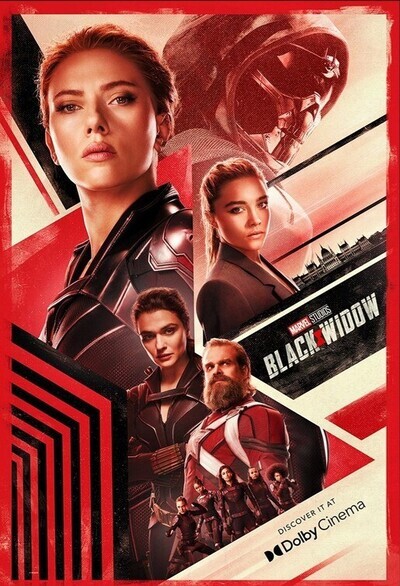 Rated PG-13 for intense sequences of violence/action, some language and thematic material.

Ray Winstone as Dreykov / The Handler