The paint-by-numbers Irish revenge thriller "Black 47" is essentially "First Blood" in period dress, only much less nuanced and entertaining. Granted, the historic dilemmas described in the film, which takes place in Western Ireland during the infamous Potato Famine, are real enough. But "Black 47" otherwise feels like a soulless retread of every post-Vietnam action film about a tough guy who lashes out at the cartoonishly inhuman military system that uses and then abandons him. The main difference is "First Blood" and its sequels concern then-contemporary wars and political strife while "Black 47" follows 19th century Irish soldier Martin (James Frecheville) as he strikes out at the British soldiers, priests, and officials who persecuted and/or murdered his family. Realistic details are only window dressing for a predictable stock plot: nice guy soldier feels disenfranchised, is pushed too far, goes on kill rampage, and is vindicated in martyrdom. "Black 47" never goes anywhere you don't expect it to, which is a real shame since its setting is pretty fascinating.

It's 1847 and British tax collectors are siccing soldiers on Irish debtors when they fail to pay unjust and unreasonable taxes. British judges also demand that their Irish subjects speak English in court (which flies in the face of a British law that requires English translators be present at all times). Worst of all: British missionaries force poor, starving Irish families to convert to Protestantism and listen to hours of sermonizing before they can eat meager portions of soup and bread that are dangled over their heads. Modern spectators might be upset when they see these inhumane scenarios dramatized in re-enactments that are worthy of the History Channel, complete with cringe-worthy expository dialogue.

Modern spectators will probably also stop short of making a leap in emotional logic from "That's awful" to "Somebody should do something." That leap is necessary if moviegoers are going to cheer for Martin, a robotic killing machine who glowers behind his beard and then fulfills every threat/promise of violence that he implicitly makes. There's not much suspense in a movie where our antihero protagonist roams the desiccated Irish country-side like an evil Johnny Appleseed, killing random British antagonists as he goes.

Most of the film's action scenes are also anticlimactic since many characters use the sort of musket rifles that take a minute or two to reload. These action sequences look impressive thanks to Declan Quinn's wide-angle cinematography, but are still boring since nondescript actors usually pop off a round or two, blink a little, and then sometimes chase each other around with Rambo-sized Bowie knifes, leaving the poor camera operators to shadow them with what looks like a hand-held rig. Cheap, yes, but not quite thrilling.

Martin is, admittedly, not the film's only protagonist. Unfortunately, Inspector Hannah (Hugo Weaving)—an equally disenchanted ex-British soldier who is forced to track and capture Martin—isn't more substantial. Like, Frecheville, Weaving spends most of his time on-screen smoldering behind his whiskers. If you find that sort of thing sexy: boy, is "Black 47" the movie for you. Everyone else will have to bear with several scenes where Weaving bides his time as prissy British soldier Pope (Freddie Fox) tries to maintain a stiff upper lip, and starry-eyed horse groomer Hobson (Barry Keoghan) drags his feet. Also, opportunistic Irish collaborator Conneely (the great Stephen Rea) is there too, but he doesn't even do as much as his equally inert co-stars.

Hannah's posse slowly catches up to Martin—a character whose lack of psychological depth and knack for killing makes him more like Jason Voorhees than John Rambo—and inevitably breaks apart once they finally catch up and reckon with Martin. "Black 47" is, in that sense, a fairly standard exploitation film, one where viewers are asked to cheer on Martin as he outpaces his pursuers and brutally executes an elite cadre of mustache-twirling antagonists (including poor Jim Broadbent, sigh).

Viewers are also asked to commiserate with Martin since his insatiable blood lust supposedly speaks to his character as a hollow man who kills and kills again because he has nothing to show for his loyal service. Granted, revenge and violence never accomplish much in "Black 47," but that just begs the question of why the filmmakers chose to follow a character whose only sympathetic qualities are his unrestrained anger and proficiency at murdering people.

It's entirely possible that Martin makes more sense to Irish viewers, since they can presumably relate with Martin's anti-British sentiments better than this reviewer did. Unfortunately, in the film, Martin often comes across like any other crazed, but ostensibly relatable antihero who wracks up kills and then slumps over in pseudo-tragic exhaustion. "Black 47" consequently feels like an unmemorable power fantasy whose only novelty is its focus on century-old grievances. Watch him kill, see them die, over and over, and then over again. 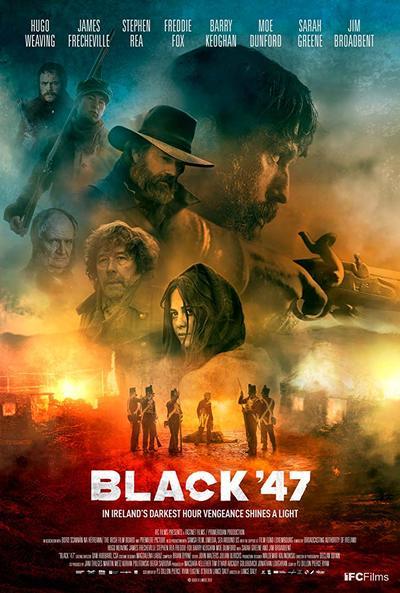 Rated R for violence, some disturbing images and language.