According to IMDb, Samuel L. Jackson currently has 163 credited roles as an actor. Even if you remove his appearances on television and video games, that still makes him one of the most prolific stars of our time. Since his filmography runs the gamut from instant classics to the blessedly forgettable, this leads one to wonder exactly what kind of criteria he employs to select roles. My guess is that there are some that he does because he knows they offer him the chance to show off his genuine gifts as an actor—films like the drama "Changing Lanes" (2002), the underrated neo-noir "No Good Deed" (2003) or his various collaborations with Quentin Tarantino—while others seem to have been selected on the size of the paycheck for his services—offered enough money, who is to say that you or I wouldn't sign on for the likes of "The Man" (2005), "Freedomland" (2006) or "The Spirit" (2008)?

Then there is the third and oddest group of all, the scripts that are so bizarre and bewildering that I suspect that he agrees to do them almost as a dare to the filmmakers to actually go out and produce them for real. How else to explain such lunacies as "Deep Blue Sea" (1999), "Formula 51" (2001), "Black Snake Moan" (2006) or the infamous "Snakes on a Plane" (2006)? His latest film, "Big Game," definitely falls into this latter category by telling a story of such a deliriously crackpot nature that there are times when it seems impossible that it could possibly exist as a real thing and not just as a parody trailer that accidentally got inflated to feature length. Alas, it never quite manages to live up (or down) to its nutty premise but that isn't to say that it doesn't have its moments here and there.

In a remote area of the wilds of Finland, young Oskari (Onni Tommila) is sent off on the eve of his 13th birthday on a rite of passage to determine his manhood—he has 24 hours to go out into the woods to hunt and bring back a trophy armed with nothing more than a bow and arrow. This would be difficult enough for Oskari since he will be laboring in the shadow of his father, who bagged himself a bear when he did it years earlier, but he can barely launch an arrow, let alone bring down anything with it. Although largely resigned to his inevitable failure in this endeavor, he is still determined to give it his best shot nevertheless.

Meanwhile, in the skies above Helsinki, lame-duck and down-in-the-polls U.S. President Moore (Jackson) is about to arrive at a conference when Air Force One is attacked by missiles and only barely escapes with his life when Secret Service agent Morris (Ray Stevenson) gets him into the plane's escape pod before it is shot down. As it turns out—Spoiler Alert—the attack was engineered by the resentful Morris as part of a diabolical plan by the psychotic and filthy rich Hazar (Mehmet Kurtulus) to not only hunt and kill Moore but to stuff and mount him as well. Luckily for Moore, his pod crashes near Oskari's camp and the kid agrees to lead him back to safety and civilization, though not until after he makes his kill. Meanwhile, Hazar and Morris are closing in while back at the Pentagon, the VP (Victor Garber), a top general (Ted Levine), a senior staffer (Felicity Huffman) and a long-retired CIA terrorist analyst (Jim Broadbent) are watching the situation unfold but are powerless to do anything.

The premise is spectacularly goofy but writer-director Jalmari Helander (whose previous film was "Rare Exports," that wonderfully strange holiday film that offered an explanation regarding the existence of Santa Claus that made even "Santa Claus Conquers the Martians" seem staid by comparison) does not play the whole thing simply for laughs either. That is actually one of the key problems with the film as a whole—there are times when it tries to embrace its silliness and times when it wants to be treated as a serious action film and the clash of tones is simply too jarring. There is also a strange lack of tension—there is never any real sense of danger and there are long stretches in the middle in which everyone just seems to be wandering around and marking time until the climax.

And yet, while the movie as a whole doesn't quite work, there are some moments here and there that do. Although Jackson seems to be treating the project mostly as a goof, he does have one good scene where he explains to Oskari that projecting a sense of power and strength can be more important than demonstrating it. (It is so good, in fact, that it seems to suggest a direction for the story that is unfortunately abandoned far too quickly.) The casting of Jim Broadbent as the CIA analyst who knows everything is pretty inspired—yes, he gets all the usual lines that such a character is required to utter but they have never been delivered in quite the way that Broadbent presents them.

I also kind of enjoyed the wacked-out climax—without giving too much away, I can assure you that every time you think it cannot possibly get any loonier, it does. Nevertheless, "Big Game" is one of those films that tries to embrace two different potential audiences and winds up missing both marks—it is a little too silly for adults and a little too nasty for kids. That said, Samuel L. Jackson has made far worse movies than this one—possibly in the time that it took me to write this review. 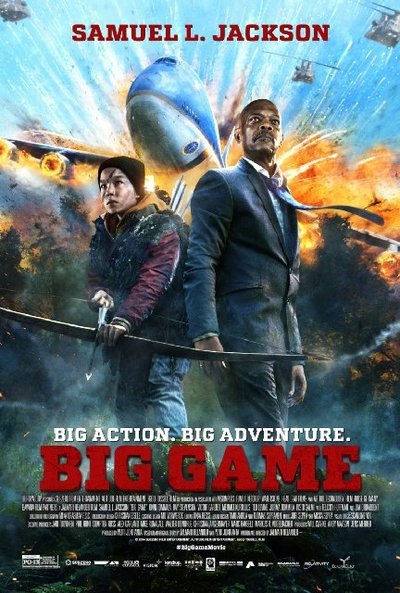 Rated PG-13 sequences of intense action and violence, and some language

Samuel L. Jackson as The President