On the face of it, Quentin Tarantino declaring the second-rate Israeli torture thriller "Big Bad Wolves" the best film of 2013 is patently ridiculous, especially given how seriously inferior it is to Tarantino's own work in the grisly exploitation field. But there's an obvious logic to it. It's been nearly twenty years since the big raft of post-"Pulp Fiction" Tarantino imitations got the bum's rush from critics and audiences. So it must be some comfort to the auteur to find that Tarantino-aping hasn't died out entirely; it's just moved to Israel.

More specifically, "Big Bad Wolves" plays like an extended tribute to the torture scene in "Reservoir Dogs," a description that alone should tell readers whether they'll find it appealing or not. The victim, a mild-mannered young schoolteacher who is suspected of killing and beheading a number of little girls, is strapped in a chair, where his toenails are ripped from his feet, his chest scorched with a blowtorch and his neck carved into with a rusty blade. (If this sounds like a fun night at the movies, then by all means, pile the kids into the wagon and go.)

As in Tarantino, all the gruesomeness isn't served straight but rather garnished with a portion of absurdist japery. For example, when the torturers apply the blowtorch to naked flesh, one remarks approvingly that it "smells like barbecue." A few of these jokes score a laugh; most come off as formulaic and flat.

For that young teacher, Dror (Rotem Keinan), the abuse is close to unrelenting. Early on, he's picked up and beaten mercilessly by three cops. When a video surreptitiously made of that assault goes viral, it seems like he may get a reprieve. But no. After another headless child is found, rogue cop Micki (Lior Ashkenazi) goes after Dror again, but his assault is interrupted by the little girl's father, Gidi (Tzahi Grad), who imprisons both the detective and the teacher in the basement of his remote country home since his motives are different than those of the police: Rather than wanting to solve the crimes, he simply intends to torture the young man into revealing the location of his daughter's head, then kill him.

Although the hour or so of torture that follows features some adroit plot twists, "Big Bad Wolves" is one of those movies in which certain storytelling lapses are bound to frustrate more logical-minded viewers. Unless I missed something, we're never told why the police came to suspect Dror in the first place, and his tormentors don't mention any evidence in their unavailing efforts to force a confession from him. If, as we're told, the murderer sexually violated every orifice of his victims, wouldn't DNA evidence provide irrefutable proof of Dror's guilt or innocence? Have the Israeli police never heard of forensics?

And then there's the wasted potential of the tale's political possibilities. In the film's press notes its directors, Navot Papushado and Aharon Kashales, say that it "draws inspiration from the society in which we live. Existential anxiety serves as Israel's foundation and attempts to define and reinforce the legitimacy of the state: a fear of terrorist activities, primarily kidnappings, unremitting feelings of being persecuted, inherent intolerance and macho behavior topped with a historical craving for vengeance create an ideal breeding ground for extreme actions and subsequent reactions."

That's a lucid and provocative statement, and there's a special, undeniable fascination in this story of ferocious, unapologetic torture taking place in Israel. If you imagine the same film with a Palestinian in the torture chair, it would be a movie with an explosive and unavoidable political message. But the one Palestinian in this story is a gentle farmer who's here for purposes of irony and humor, not provocation.

A film like last year's "Prisoners" shows that a similar premise can be played for powerful, thought-provoking drama. The makers of "Big Bad Wolves" may want to claim a serious social critique for their film, but they have elected to bury it so deeply within thriller genre conventions that most viewers won't bother to dig for it. Of course, there's a worldwide market for Tarantino-style seriocomic violent brutality, and Papushado and Keshales can be credited with giving the Israeli cinema a kind of genre filmmaking that it has seldom produced. That's an achievement of sorts, surely, but it's a far lesser one than a more artistically ambitious film could have provided. 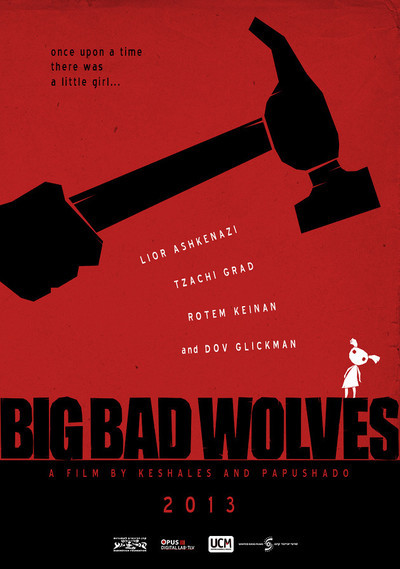 Kais Nashif as Man on horse