"Outlasting everyone is the best revenge these days," a cop tells a gangster in Takeshi Kitano's 2010 gangster thriller "Outrage." Maybe, if you're a gangster; but if you're a moviegoer, the best revenge is revenge. Audiences don't buy tickets to yakuza thrillers hoping for sensitive pacifist statements. They want to see more of what Kitano has given them in so many Japanese crime thrillers: betrayals and retributions marked by punitive violence so cruel that when the film cuts away from it, it's as if Kitano has shielded your eyes for you.

"Outrage" was a banquet of suffering. Signature dishes included a slashed face, a half-bitten tongue, anesthesia-free dentistry, chopsticks through the ear, and severed fingers in noodle soup. "Beyond Outrage" doesn't really go "beyond" in any sense except pushing the story a bit further. There are gruesome acts of violence, including a torture-by-drill, but for the most part Kitano seems content to expand on one of his biggest hits by taking a page or two from Francis Coppola's "Godfather" trilogy.

The original was a closed-off suspense picture about men in suits plotting death and disfigurement in Rembrandt-lit boardrooms, restaurants and nightclubs. The gore was somewhat intertwined with a cop corruption subplot (represented by Fumiyo Kohinata's Detective Kataoka, who did favors for one of the warring clans), but for the most part—as in "The Godfather"—what happened in the underworld stayed in the underworld. In "Beyond Outrage," which is set five years after the bloody coup that ended the first film, the violence has spilled out in to the wider world, a la the second and third "Godfather" pictures.

The new Grand Yakuza leader of the Sanno-Kai syndicate, Kato (Tomokazu Miura), has raised the family's profile and profit margins. The family is doing business with the national government so openly that it doesn't hesitate to kill a troublesome police detective and his nightclub hostess girlfriend (a go-between for the gangsters and cops) and dump them in a river. Kato and his lieutenant and chief financial officer Ishihara (Ryo Case) have promoted younger family members over older, more traditional gangsters, partly to protect themselves against counter-plots by people who rightly suspect that they murdered their predecessors. The new bosses order young and old gangsters alike to learn a new, white-collar way of making money. There's talk of stocks and hedge funds, and references to the family's prostitution business going global.

The police department orders the cop Kataoka to come up with a plan to neuter the syndicate. It's here that we start to notice the film's narrative gears creaking a bit. We learn that Kataoka was playing a "long con" back in the first film and was never truly corrupt (though he did get too chummy with the people he was fooling) and that Kitano's character, the haggard footsoldier Otomo, wasn't killed behind bars at the end, but survived his shanking. "You started a rumor that I was dead," Otomo tells Kataoka. This is a bit too much like comic book or bad-TV storytelling: declaring, "Pay no mind to what you thought you knew" because it's the only way to tell the story you want to tell.

Here, that story is "Takeshi Kitano kills a bunch of people." Granted, that's the story Kitano has told many times before, often superbly, particularly in such classics as "Sonatine" and "Fireworks" and "Brother," which are the closest thing to classic Clint Eastwood vehicles as Japanese popular cinema has produced. Like Eastwood's gangster and cop films, Kitano's crime thrillers know how to have their cake and eat it, too. They critique the mentality of macho, prideful, violent men operating in a world largely devoid of women, while at the same time giving the films' overwhelmingly male audiences the tribal carnage they want. The attitude is, "Crime doesn't pay and revenge is futile, and in case you didn't get that, here's some more crime and revenge."

There are marvelous satirical touches in Kitano's yakuza thrillers. They crystallize the idea that, as in the "Godfather" films and Martin Scorsese's gangster pictures, you're seeing colorful metaphors for business in general, and for an old way of life being supplanted by a new one. The first half-hour of "Beyond Outrage" is an elegant and bleak comedy that finds murderous gangsters griping about workplace politics, and features some of Kitano's strongest filmmaking.

As always, Kitano displays a fine eye and ear for the details of protocol. When Otomo hooks up with an old adversary from a rival crime family in "Outrage"—Hideo Nakano's Kimura, whose face Otomo slashed with a razor—the man gifts Otomo with two godsons who are supposed to protect him, but are so incompetent that Otomo can barely protect them. Otomo can't turn the young fools away because it would be an insult, just as it would be insulting to turn away a prostitute given to him by an Osaka crime boss. (The prostitute shows him her bare back before leaving, so that he can describe her gang tattoos and make it seem as though they slept together.) There are many jokes at the expense of the the new Sanno-Kai crime boss' tone-deafness and cheapness.  "No meal served at an executive meeting, damn," an old foot soldier mutters. You get the feeling that if Kato had better people skills, his underlings might not be in such a hurry to expose his past treachery. Sometimes the difference between conspiracy and contentment is a nice lunch.

Unfortunately, early hints that the the actor-filmmaker's latest will be a brilliant, bloody, sustained workplace satire don't pan out. This is an intelligently composed, crisply edited, sometimes amusing, but otherwise unremarkable cross/double cross gangster picture. It seems as though it wants to be a Japanese "The Godfather, Part II," but it takes too long to get going, expends too way much screen time setting up Kitano's character as a resurrected revenge-seeker/fly-in-the-ointment, and suffers from a jumbled and somewhat perfunctory second half. (Kitano, who's normally aces at laying out politically complex gangster plots, compresses a mob war into a series of mass murder tableaus, as if he's growing bored and just wants to get it all over with.) "Beyond Outrage" is worth seeing if you're a fan of the genre, or of Kitano specifically, though, and some of the lines are quotable in that "Godfather" way. "You can never really know what the other guy is thinking," one character says, "even if he's an obedient servant with a friendly smile." 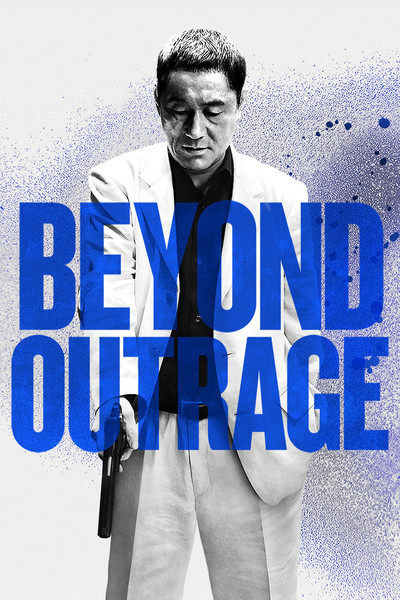