While “Beloved Sisters” is undeniably conscientious in its attempt to simulate the foment of what I’ll call pre-Romanticism in late 18th-century Germany, and engagingly depict the conditions of life in that time and place, the movie ultimately has the most value as a showcase for two exceptional performers, the young actresses Henriette Confurius and Hannah Herzsprung. The pair plays the sisters of the title, Charlotte and Caroline von Lengefeld. At the outset of the movie’s story, it’s their condition as daughters rather than sisters that’s paramount. Their mother, Louise (Claudia Messner), an aristocratic woman of culture, has maintained her standard of living via a fortuitous marriage for Caroline; she hopes to do similarly well with Charlotte, who’s sent to live with an aunt who instructs her in the manners of the Euro-aristocracy before introducing her to a Scottish sea captain. All seems to be moving along smoothly despite Charlotte’s irreverent nature, which at one point manifests itself in her trading bon-mots with a young poet who happens to be passing her chamber window during an idle moment.

This poet is none other than Major German Cultural Figure Fredrich Schiller, and he will soon turn the world of the two sisters, not to mention the mom, on its ear by falling into a romantic entanglement with both Charlotte and Caroline. At almost three hours, “Beloved Sisters,” written and directed by Dominik Graf, is a very nearly epic romance, one that approaches the idea of a ménage-a-trois as emblematic of a particular idealism on the part of its participants rather than a hotsy-totsy taboo-busting arrangement. Indeed, the much-bruited ménage never really manifests itself and the last quarter of the picture finds its characters acting out relatively conventional micro-scenarios of jealousy and betrayal. It’s all quite handsomely mounted and shot, and while it’s not really all that engaged by the life of the mind as Schiller (Florian Stetter) and his never-seen-in-full father-figure/rival Goethe, not to mention Caroline herself apparently, were, the movie’s not an entirely shabby stab at a historical/cultural chronicle.

But, as I mentioned at the outset, it’s Herzsprung and Confurius who make the movie worth seeing: they give it a pulse. Herzsrpung’s Caroline, who’s comfortably caged in a loveless marriage of comfort/convenience, has a raging soul and an inchoate writing talent; younger sister Charlotte may in fact be more quick-witted but has allowed herself to be her older sister’s subordinate, and once her alliance with Schiller begins, she seems to transfer some of that allegiance to his. She needs love, but she also needs a cause. The two actresses navigate the emotional complexity of their roles with quicksilver intuition and what seems like near-bottomless empathy. They make the sisters full individual creations who are nevertheless inextricably bound to each other with the aim of (among other things) making it practically impossible for the viewer to choose a “side.” It’s more their doing than Graf’s that one believes that Schiller could be entirely in love with both of the women. 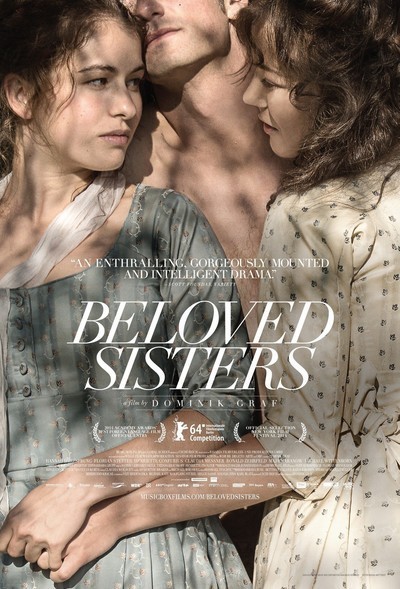