Moll, a young redheaded woman, puts on a yellow sundress and stares at herself in the mirror. Downstairs, guests gather for her birthday party. Moll's shoulders hunch inwards, her arms are tense. It is as though her body revolts against taking up space, being visible. She stands on the sidelines of her own party like a wraith, sadness seeping out in moments when she thinks no one is looking. In an early voiceover, she states she has always been obsessed with killer whales, those huge creatures who are "always smiling." It's hard to associate this obsession with such a frail-looking put-upon young woman. By the end of "Beast," Michael Pearce's remarkable first feature, we more than understand.

The aforementioned birthday party sets up Moll's home life: She lives with her parents on the island of Jersey. She has a nothing job as a tour guide. Her father is descending into dementia, and Moll is required to do her part and take care of him. Her mother (Geraldine James, in a truly chilling performance) keeps Moll on the shortest of possible leashes, for reasons which aren't entirely clear at first. After Moll's sister hijacks the birthday party by announcing she's pregnant with twins, Moll flees into the night, looking for ... she doesn't know what. She heads to a nearby bar, where she meets a guy and they dance til dawn, but afterwards, on the beach, he won't take "No" for an answer. They tussle. This potentially violent situation is broken up by a rifle-wielding mysterious stranger, who threatens the guy off and then offers to drive Moll home. This is Pascal (Johnny Flynn), a charismatic soft-faced guy with dirt under his fingernails and a thick crop of blonde hair.

Moll looks at Pascal as though he is oxygen. He's a kind of grubby White Rabbit, leading Alice away from the social and civilized world. (The fact that he's an illegal poacher, with a bucket of rabbit pelts in the back seat of his jeep, helps land the metaphor.) Into her narrow life has stepped this gorgeous and wild figure, who - for reasons mysterious - has chosen her. She flings herself into the experience so wholeheartedly you worry for her. Pascal lights up a cigarette indoors, he tracks dirt on the carpet, he shatters social niceties, saying to Moll in front of her mother, "Let's go out and get shit-faced."  It's a world so strict that Pascal wearing black jeans to the country club is almost as scandalous as Bette Davis wearing a red ballgown in "Jezebel". To Moll, he is life itself. And yet ... from the jump, we have our doubts about him. For some time, girls have been going missing all over the island. A dead girl is found buried in a field. Locals go on search parties. Hysterical updates dominate the news.

One of the strengths of the film, also written by Pearce, is how much it is willing to withhold, without descending into "Gotcha!" manipulation. A key revelation about Moll doesn't come out until nearly the end of the film. Information about Pascal is also slow to arrive. What we hear is not good, but we are left in an uncertain state, with only our suspicions and speculations, adding to the generally paranoid atmosphere. Jersey, gorgeously shot by Benjamin Kračun, is a place of crashing surf, towering rock cliffs, impenetrable dark forests: in "Beast" civilization is a paper-thin layer over pure chaos.

Jessie Buckley gives what can only be called a breakout performance as Moll. She is a revelation. Perhaps because she is an unknown, it is never completely clear what she is going to do from one moment to the next. She is thrillingly alive, with waves of feeling erupting over her face, whether she's struggling against the shame spiral her mother puts her through, or feverishly reaching for Pascal's fly as they tryst in an empty forest glade. Sometimes she subsides into a strange blankness, or bursts forth in tremulous quivering need. When the film opens, Moll is already in a devastated state. Her family life is claustrophobic. Her mother is unpredictable, and yet so in control Moll cannot wriggle free. In an argument, her mother's goal is to crush Moll's sense of self and agency. Once she accomplishes that (and it's not hard), she shifts abruptly, saying, "Let's be friends again." With all of the terrors in "Beast," the most frightening thing may be the mother-daughter relationship.

Pascal and Moll hold within them the potential of many deadly lover-duos in cinema, Kit and Holly in "Badlands," or Bonnie and Clyde. For a while, it seems like they might be on the road to going the outlaw route, but "Beast" has other things up its sleeve. The police-procedural aspect of the film is pretty stock stuff, with the cops circling Pascal, closing in on him. "Whodunit" is important, but it's not the really the true engine of the film. The engine of the film is the gradual transformation of Moll, masterfully tracked by Buckley in such a gradual arc you might miss what's happening at first. The delicate sad girl in a yellow sundress gets dirtier and dirtier, as though retreating to her proper and mostly uncivilized state. It is who she wants to be, and eventually she is so feral it makes you wonder uneasily if her mother kept her on a short leash for a reason. Once out of the confines of her family, Moll is dangerously unmoored. In this, the film reminded me of Roman Polanski's "Repulsion" (which also, incidentally, features a rabbit as a central motif), where Catherine Deneuve gives a great performance as a dissociated young woman, so dominated and bossed by her older sister she completely falls apart once left to her own devices.

Buckley goes as far as the material requires her to go, and then goes even further than that. Flynn, too, gives a terrifically suggestive performance. The two are amazing onscreen together. You don't know which one to look at, their dynamic is so strange and alive. Who's the predator and who's the prey here?

"Beast" doesn't entirely hold together, but it's never less than fascinating to watch, mainly because it keeps so close to Moll's point of view, trapping us in her belljar. This is an extremely strong first feature from Pearce, and Buckley is riveting. You can't look away. 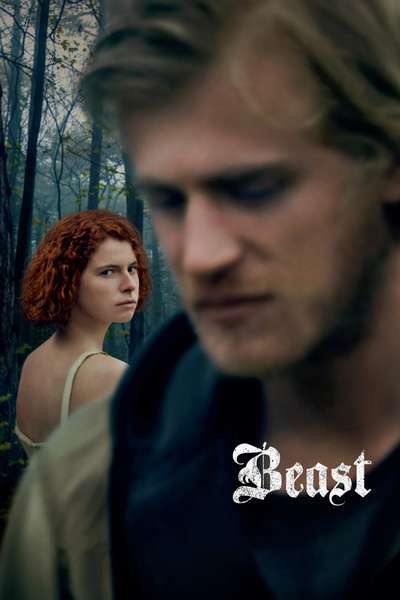