If you’re like me, you laughed at the trailers for “Baywatch,” the feature-film comedy sendup of/homage to the cheesy lifeguarding adventure TV series. That show featured quasi-hunk David Hasselhoff and bodacious babe Pamela Anderson plucking bodies from water and solving crimes, something that was not really their bailiwick—a point that this movie at first pokes fun at, and then belabors into unfunniness. But let me not get ahead of myself.

The trailers were funny enough to make me look forward to the picture. Imagine my displeasure when confronted with the nearly two-hour full feature, in which the trailer jokes were no longer funny; a full feature with a storyline that an enterprising six-year-old might have thought was a little too rudimentary. (The fact that the storyline was concocted by Thomas Lennon and David Ben Garant, the hipster hacks who have in fact written a book about how to make big dollars in Hollywood by writing utter crap screenplays, could be said to add insult to injury were both injury and insult not totally predictable.)

How is it, you might ask, that the trailer jokes are funnier than what is in the movie? Well at least one joke from the trailer isn’t in the movie. And as for the rest, the answer lies in the fact that this is another one of those raunchy comedies that’s barely a movie, that looks like it was edited by dumping a bunch of footage into whatever movie-cutting software they’re using and hitting “randomize.” The number of out-of-continuity shots in the first 20 minutes was so large I stopped counting.

The movie begins with Dwayne Johnson’s Mitch Buchannon, head lifeguard of Baywatch, running around his beach, reaffirming his supremacy. Tryouts for positions on his team are tomorrow, and today a few of the new recruits introduce themselves. One is Ronnie (Jon Bass), the tubby, nerdy tech guy with a thing for always-running-in-slo-mo Baywatch hottie CJ (Kelly Rohrbach). His thing is such that it causes him some physical discomfort in a long, drawn-out, unfunny “stuck junk” bit half adapted from “There’s Something About Mary.” Another candidate is Alexandra Daddario’s Summer, who will be the slo-mo brunette to CJ’s blonde. (Ilfenesh Hadera is Stephanie, the most authoritative female of the crew.) The guy who headquarters says must be included is disgraced Olympic swimmer Matt Brody (Zac Efron), who’s getting on the crew in a combination of publicity stunt and community service. Mitch is not too happy about this. His name-calling of Matt (which does include the sobriquet “High School Musical”) is one of the few running bits that manage to raise a smile.

After all the characters are introduced, we cut to the next day’s tryouts, at which Ronnie and Summer prove their mettle, and Matt goes head-to-head with Mitch. And after this scene, the movie injects an “are you looking at my boobs” exchange between Summer and Matt, in which the characters are wearing the costumes they had on in their introductory scenes taking place the day before. As they used to say on “Mystery Science Theater 3000,” “They just didn’t care.”

Which may still have you asking, how does this affect the jokes? Well, in the trailer there’s one isolated bit in which Efron’s character stands gloating on a yacht deck, saying “Jason Bourne ain’t got nothing on me.” Only he doesn’t get to the last word, because a bad guy behind him knocks him out. Funny in the trailer, because it’s cut to hit on a certain beat, and it does. In the movie, they use a completely different take of the line and the shot—it’s a tighter perspective from a low angle, with a little anamorphic distortion—and there’s no breathing room before Efron makes his proclamation, so the line falls flat.

It kind of goes that way throughout the movie. Which also features long periods of too-sincere homilies about teamwork, weirdly gratuitous brutality (one innocuous character is subjected to a grotesquely grisly death) and an extended corpse-penis joke which, in the dishonorable tradition of “Dirty Grandpa,” subjects a character played by Zac Efron to humiliation in a way that’s not even stealthily homophobic. On the plus side, the movie has a pervading air of crass amiability about it—it’s almost like a two-hour end-credits gag reel. (Nevertheless, it contains an end credits gag reel.) But as I said, if you saw the trailer, you got the best the movie has to offer. 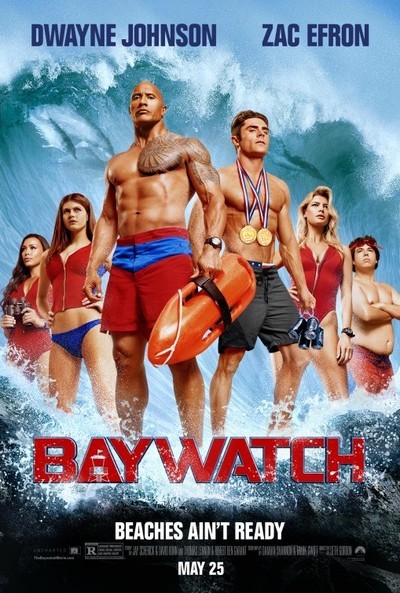 Hannibal Buress as Dave the Tech

David Hasselhoff as The Mentor

Writer (based on the series "Baywatch" created by)