"Barb and Star Go to Vista Del Mar" is an old-fashioned romp. "Romp" itself is an old-fashioned word, but it shouldn't be. The film, directed by Josh Greenbaum, and starring Kristen Wiig and Annie Mumolo (who also co-wrote the script) doesn't take itself seriously at all. In fact, it glories in the openly silly, the ludicrous; it proceeds with the attitude: "Hey, let's just throw this random bit in there, let's put in some musical numbers too, why not!" Once you stop worrying about realism, you can do whatever you want, as long as it's funny, as long as it is watchable, with the right pacing. In eras past, a movie like this would have run for months at a drive-in theatre. With a hodge-podge mix of about five different genres, including elements from movies like "Top Secret," or "Real Genius," "Airplane!" or something like "Love at First Bite," it's also a throwback to 1960s James Bond movies, before the franchise started to take itself so seriously, or the Elvis movies, where Elvis is dropped into some "exotic" location to have adventures and romances, sings songs, and get involved in local and/or international intrigue. None of it has any real-world "relevance" and nobody cares because it's not that kind of movie. There's something so invigorating about romps like this, and "Barb and Star" is no exception.

Coming a decade after Wiig and Mumolo's Oscar-nominated script for "Bridesmaids," "Barb and Star" features both Wiig and Mumolo playing best-friends Star (Wiig) and Barb (Mumolo), nice ladies from Nebraska who live together after their marriages ended. They decide to take a little trip, their very first. Naïve and wide-eyed with childish delight, they head to a resort town called Vista Del Mar in Florida, packing their curlers and culottes. (Culottes play a huge role in the film.) Once there, they meet and fall in insta-love/lust with Edgar Pagét (Jamie Dornan), the hottie sitting next to them at the bar. Edgar, though, is not who he says he is. He is in Vista Del Mar at the behest of his employer and (he hopes) girlfriend, an evil spider-woman-type who lives in a high-tech underground lair, dreaming of wiping Vista Del Mar off the map via a swarm of deadly mosquitoes.

You got all that? If you don't, it doesn't matter. What matters is the energy and the confident propulsion of all the silliness, grounded by Wiig and Mumolo, whose characterizations may be broad but never empty caricatures. Wiig and Mumolo met years ago when they both performed at The Groundlings, the legendary improv and sketch comedy theatre in Los Angeles. You can see the basis of that work in their performances here, where they "riff" on each other, picking up internal cues, finishing each others' sentences (sometimes incorrectly), and leaping into the breach of awkward moments with nonstop sometimes desperate babble. What they also manage to do, however, and it's crucial, is give a sense of the very real friendship between these two women. They lose their heads over Edgar in a very funny sequence where the three of them gyrate on the dance floor to a re-mix of Celine Dion's theme for "Titanic," and there's some rivalry for his affection, but none of that causes a breach in the friendship. Well, there is one breach, which then leads to a very funny nod to "Fatal Attraction," but other than that, the friendship is solid. This is refreshing.

A movie like this needs its pace to be on point. If there was any dead air, it'd sink. Greenbaum understands the importance of a well-placed cut (one cut in particular made me laugh out loud). Wiig and Mumolo are so compulsively watchable, together and apart, they keep the whole thing bobbing in the air like a beach ball. The absurdity of the proceedings is highlighted, rather than underplayed. Both villains make lengthy self-pitying monologues as everyone just stands around listening, glancing at each other awkwardly. The entire hotel staff does a massive musical number welcoming Barb and Star to Vista Del Mar. Damon Wayans Jr. is very funny as the most incompetent secret agent who ever existed, revealing his real name and phone number in his first interaction with Edgar, and then saying, "Dammit, I wasn't supposed to do that." Jamie Dornan does an entire musical number on the beach, leaping through the sand, lip synching as he leans sadly against palm trees. It's good to see Dornan loosen up, after his role as Christian Gray in the "Fifty Shades of Grey" franchise, or as the serial killer in "The Fall." It's fun to see him not take himself seriously, as well as going toe-to-toe with both Wiig and Mumolo, who bring out all kinds of interesting "shades" in his talent.

Wiig and Mumolo call to mind the brilliant character actresses of the 1970s, who could sustain a "character" for the length of an entire film. Some characters can only last in a 10-minute sketch before wearing out their welcome, but people like Madeline Kahn, Cloris Leachman, Teri Garr, could create and sustain these very broad characters. I think of some of Gilda Radner's characters on "Saturday Night Live." Her "Roseanne Rosannadanna" character might not be able to sustain an entire film, but Lisa Loopner (from "The Nerds" sketch with Bill Murray as "Todd") could. (If you watch all of those "Nerd" sketches chronologically, they create their own little arc of development, with all kinds of different aspects of the relationship explored and deepened). Meryl Streep can also work this way, sustaining very broad characters—"Death Becomes Her," "She-Devil," or "The Devil Wears Prada"—through an entire film. It takes enormous skill. This is what Wiig and Mumolo do. Character acting like this—for those who can do it—is not limiting, but freeing. The sky's the limit.

In tough times, like the time we live in now, films addressing real-world events, shining spotlights on urgent issues, are important. But fluff is underrated. The biggest box office draws in the 1930s were screwball comedies and movies starring Fred Astaire and Ginger Rogers, movies where the Depression didn't exist, and they provided the audience a peaceful space to revel in beauty and grace, if only for an hour or two. In September 2001, "Mamma Mia" opened on Broadway, one of the first shows to open after 9/11. The smoke was still rising downtown when the curtain went up. You'd think audiences would recoil. In a grieving city, how could this musical—featuring the songs of ABBA, of all things—provide anything to anyone? But it became an instant hit, and ran for 14 years. In his emotional review in the New York Times, Ben Brantley wrote, "It is a widely known if seldom spoken truth that when the going gets tough, the tough want cupcakes ... Those in need of such solace—and who doesn’t that include in New York these days?—will be glad to learn that a giant singing Hostess cupcake opened at the Winter Garden Theatre last night."

Comedy being what it is, your mileage may vary, but for me the pure candy-colored exuberant silliness of "Barb and Star" didn't just make me laugh. It provided solace, too. 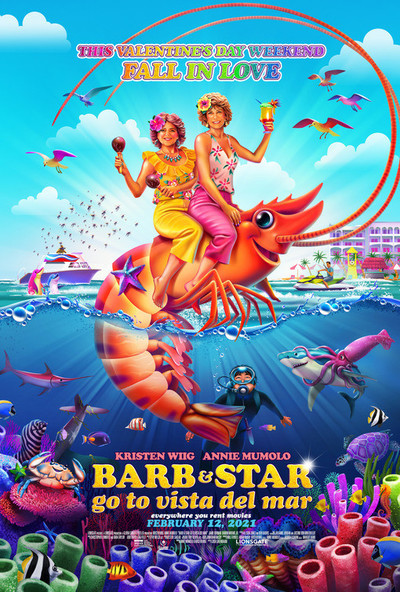 Rated PG-13 for crude sexual content, drug use and some strong language.

Kwame Patterson as George the Bartender