You would have to be a darn fool to believe that Sony thought it had a good movie in “Bad Boys For Life.” It’s being released smack dab in the middle of the cinematic wasteland that is January, the month where bad movies go to die with little fanfare, never to be heard from again. Hell, even that Fresh Pigeon of Bel-Air cartoon, “Spies in Disguise,” got released during Oscar season. Certainly you’d expect a little more release-date love for the third entry of a hit franchise that stars Will Smith and Martin Lawrence as reckless cops armed with comedic banter and oodles of collateral damage. After all, its predecessors were released in April and July, respectively, and were both directed by Michael Bay. Bay’s conspicuous absence added to my suspicions that there was little studio faith in this feature.

Surprisingly, “Bad Boys For Life” is nowhere near as bad as its opening day schedule would indicate. It is the best of the three films, offering in some odd ways a corrective to the prior installments. Unlike the original, this one finds some depth in its female characters; unlike the second, it’s not an exceptionally vile mishmash of “Freebie and the Bean” and “Scarface” whose running time felt approximately 600 hours long. This time, Detectives Marcus Burnett (Martin Lawrence) and Mike Lowery (Will Smith) are more mindful of how much collateral damage they do, even if the latter must be constantly reminded to temper his carnage. I didn’t buy this “kinder, gentler Bad Boys” shtick for one minute, but that doesn’t mean I was bored. When the climax starts laying telenovela-level melodrama atop the explosions and gunplay while openly cannibalizing ideas from “Gemini Man,” I had to admire the audacity of those choices.

The film opens with that speeding Porsche sequence from the trailer, with Mike and Marcus employing their usual disregard for innocents while engaging in what looks like the pursuit of the latest Miami criminal. Turns out all the stunts are in service to getting Marcus to the hospital for the birth of his granddaughter. Now a grandfather—or a “Pop-Pop” as he calls himself—Marcus re-evaluates his law enforcement career. Unlike his hothead partner, he has a wife and family and wants to spend more time with them rather than the hundreds of criminals he’s been shooting. In the words of a far better buddy cop picture, Marcus realizes he’s “getting too old for this shit.” Mike tries to change his mind.

Meanwhile, something is brewing in Mexico, and I literally mean “brewing.” A self-proclaimed bruja named Isabel Aretas (Kate del Castillo) executes a gruesome, “Silence of the Lambs”-style prison breakout, reuniting with her son Armando (Jacob Scipio). It’s all part of a plan to murder the people who put Isabel in prison and her husband in the grave. One of those unlucky folks is Det. Lowery, whom Isabel commands her son to kill last “so he can suffer.” Castillo plays her role with maximum toughness, so much so that I wish she’d just gone after her enemies herself, but that whole witch character trait had me worried that “Bad Boys for Life” was going to embarrassingly do for brujería what Steven Seagal’s “Marked for Death” did for voodoo.

Armando executes his mother’s wishes and enemies while clad in motorcycle gear straight out of “Gemini Man.” He violates her order of operations, however, going after Mike first. The sequences following this attack attempt to imbue the film with some real emotional stakes, and credit must be given to Lawrence for reminding us that he can convincingly navigate dramatic scenes. Screenwriters Chris Bremner, Peter Craig and Joe Carnahan use this plot development to sneakily insert a reason for the aforementioned minimization of collateral damage in the action scenes, though rest assured, there’s still enough violence for a rather hard-R rating.

Followers of the series will find a few Easter eggs hidden throughout. My audience laughed heartily at one that, unfortunately, reminded me of one of the worst scenes in “Bad Boys II.” Despite the 25-year span between this film and the original, several cast members also return. In addition to Smith and Lawrence, the always-welcome Joe Pantoliano is back as Captain Howard, the screaming police chief whose agita is exacerbated by the recklessness of his best cops. He’s very funny, as is Lawrence, who finds some fresh notes in the screen persona he’s been playing since he debuted in “House Party.”

Lest I forget that, like so many other recent action movies featuring older stars, this movie gives us a crew of new-fangled youths whose knowledge of computers bumps heads with the more hands-on approach of their elders. Here, it’s AMMO, a new unit run by Mike’s old flame Rita (Paola Nuñez) and featuring Vanessa Hudgens from “High School Musical” and “Spring Breakers.” Their use of drones and hacking is mocked by the old school police officers, so it’s only a matter of time before AMMO is forced to use actual ammo to get their jobs done. While AMMO prepares for battle, Rita and Mike generate some believable rom-com sparks.

Perhaps the only surprise in “Bad Boys For Life” is its desire to embroil us in an emotional stake for Mike and Marcus. Not in the superficial, buddy-buddy, bromantic way you’d expect, but in a sincerely earnest way that is kind of off-putting when you remember how Bay’s films avoided any semblance of warmth. Dare I say that directors Adil El Arbi and Bilall Fallah steal a page from the “old man’s lament” playbook that buoyed "Pain and Glory" and “The Irishman,” and that Smith and Lawrence do their best to try and pull it off. I had a “too much, too little, too late” reaction to these attempts to fully humanize Mike and Marcus, but your mileage may vary here. If nothing else, I appreciated the attempt.

What I didn’t appreciate was the ridiculous, Marvel-style post-credits sequence that sets up a potential “Bad Boys 4: The Return of Thanos” or something like that. What about all that talk of “one last time” between Mike and Marcus? We didn’t need this time, let alone the next. But I digress. While I’m marginally not recommending this one, I’ll let you in on a little secret: If this were on cable at 3am, I’d watch the hell out of it. 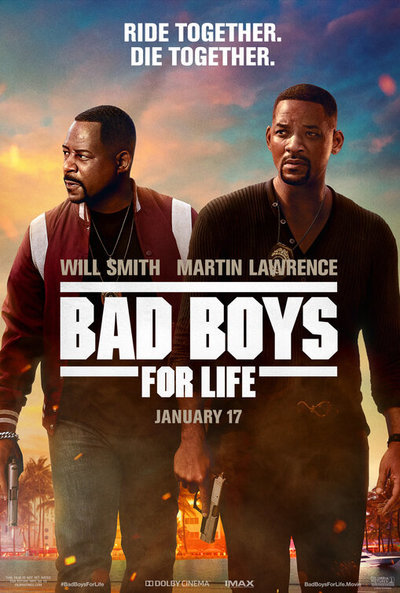 Will Smith as Detective Mike Lowrey