Damien Chazelle is obsessed with the punishing pursuit of perfection. Whether it's finding an immaculate tempo, hurtling into space, or making it big in Hollywood, his films feature characters who are willing to endure physical and emotional torture to reach the finish line. If "La La Land" was his wide-eyed, sentimental look at the movie machine, "Babylon" feels like a very intentional counter to the criticisms of that film. It's a lavish 1920s-period piece about how often the silver screen images that feel like magic are really the product of incredibly hard work, broken dreams, and a lot of luck. Multiple sequences in "Babylon" detail how much work goes into two seconds of film, whether it's a field of dozens of extras sitting around while a camera is obtained or the difficult perfection needed when recording sound. Those two excellent scenes remind us that none of this is easy, even if it all looks so much fun.

Is it all worth it? That's the tough question. Chazelle gives lip service to the idea that this version of landing on the moon is worth the trip, but he drags his characters and the viewers through so much misanthropy to get there that it's hard to believe him. "Babylon" is a film of stunning parts—both individual scenes, performances, and tech elements—but it feels like the magic touch that Chazelle needed to pull them together in an honest way eludes him. There's something to be said about a film being so robustly unapologetic, but I felt as manipulated and deluded as the outsiders in this film who are eaten up by the Hollywood machine by the time it was over. One might argue that's intentional—a "feel bad" Hollywood movie is rare—but it's the difference between pulling back a curtain and simply rubbing your face in elephant shit.

And that's how "Babylon" opens, introducing us to Manny Torres (Diego Calva), a Mexican American in the city of angels at the end of the silent film era. He's trying to get an elephant to an insane Hollywood party, the kind of drug- and sex-fueled affair that was only whispered about in the gossip rags of the time. Chazelle uses the orgiastic bacchanal to introduce his players, including an aspiring actress perfectly named Nellie LaRoy (Margot Robbie), who catches Manny's eye just as her star is about to rise. We also meet the suave Jack Conrad (Brad Pitt), a silent film star about to leave his third wife and be struck by the fickle finger of fame as talkies come into the picture and the wheel turns to a new era of stars. There's a jazz trumpet player named Sidney (Jovan Adepo) and the underwritten role of a cabaret singer named Lady Fay Zhu (Li Jun Li). Gossip journalist Elinor St. John (Jean Smart) writes about it all while recognizable faces like Lukas Haas, Olivia Wilde, Spike Jonze, Jeff Garlin, and even Flea flirt on the edges of the story.

It's an undeniably ace ensemble, led by another fearless turn from Robbie and a star-making one from Calva, but Pitt is the stand-out, conveying a sense of lost glory that sometimes feels almost personal. Pitt has been a star for over 30 years—he's seen legends like Jack Conrad come and go, and he imbues his performance with a relatable melancholy that gives the entire film depth that it could have used in a few more places.

Chazelle's ambitious tapestry approach focuses on the ascending arcs of the outsiders—Manny, Sidney, and Nellie don't understand they're part of a system that values them about as much as it does the equipment it needs to shoot the films (maybe less). Even the star Jack Conrad will discover how disposable legends can be. All of them become power players in their own way—Nellie holds the screen in a way that few actresses other than Robbie could convey convincingly; Sidney's musical talent ascends as sound takes over the silents; Manny is clearly one of the smarter people on a set, and that grants him an increasing number of decisions. There's an underdeveloped love story between Manny and Nellie, but this film is more about the love of movies and Hollywood history than romance. It is also loaded with an overwhelming blend of historical detail and urban legends. Chazelle clearly did his homework.

And, once again, it feels like the filmmaker's commitment elevated his team of craftspeople. Linus Sandgren's fluid cinematography gives the film a lot of its momentum—his shots are rarely flashy but always propulsive. Justin Hurwitz's score might be the best of the year, finding recurring themes for its characters that gives the entire piece more of a sense of opera—a connection that fits this story's dark tone and tragic endings. The production design straddles that line between feeling genuine and also larger than life at the same time. The intercutting of the stories sometimes feels like it gets away from the excellent editor Tom Cross, but that's more a product of Chazelle's occasionally unfocused script than anything in the editing room.

About that script. "Babylon" is a test of whether or not a film can be the sum of its gorgeous pieces. A great score, a talented ensemble, and expert cinematography—all are undeniable here. And yet there are narrative elements of "Babylon" that feel hollow from the very beginning and only get more so as Chazelle tries to inject some manipulative lessons into the final scenes. A film like "Babylon" can be aggressively bitter and contemptuous, but I found it hypocritical when it tries to play the "isn't it all worth it" card that everyone knows is coming in the final scenes. Fans of this film seem to be adoring this finale, but it struck me as the falsest material in Chazelle's career.

There's a sense that Chazelle is suggesting that we don't get "Singin' in the Rain" if lives aren't destroyed during the transition from silent to talkies, and isn't it great that we got that movie? That's a deeply cynical and superficial way to look at filmmaking. If he thinks he's pulling back the curtain on a broken industry, he reveals himself to be a part of that warped system in the end. It's like he doesn't want to seriously consider how his beloved art will destroy its dreamers as long as his raging party keeps going.

Available only in theaters on December 23rd. 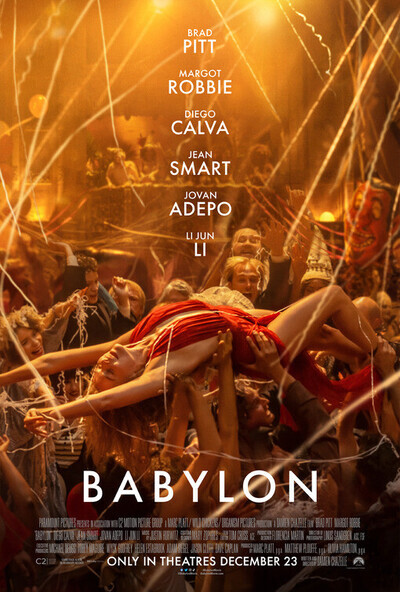 Marcos A. Ferraez as Police Officer

Rory Scovel as The Count