All happy families are alike but an unhappy family is unhappy after its own fashion.

This is one of the most familiar quotations in literature for the excellent reason that it states a truth everyone can recognize. The strength of Barry Levinson's "Avalon" is that it starts as a movie about a happy family and shows why it became unhappy after its own fashion. During the first half hour of the film, my heart sank because it seemed to be another of those potted biopics about an immigrant family's legends and eccentricities, all three times as colorful as life. Then the colors began to darken and the mood began to change, and the film deepened into the story of many American families which have grown apart over the generations.

Consider for a moment the term "nuclear family." It reflects a goal we aspire to in our society: Mom and Dad and all the kids, gathered around the hearth with the family dog and the television set. But there is something missing from the picture: Grandparents, uncles, aunts, cousins, in-laws. We call such a family nuclear because it revolves around the nucleus of a single family home. But it is also nuclear because it flies in a lonely orbit of its own.

Levinson's "Avalon" is inspired by the experiences of his own family. His grandparents came to American from Russia, part of a large Jewish family that pooled its resources and brought over one relative after another, until at last the five Krichinsky brothers had all settled in Baltimore. They were musicians--violinists, available by hire--but during the week they worked as paper-hangers. They worked hard and raised large families and their extended family was the center of their social life. They lived near to one another, and held family councils, and pooled their money for charitable giving and to help out family members in need. And they had glowing ambitions for their children. One parent tells his son he will never tear him how to hang wall paper, because "it is not a job you should grow up to do." Notes like this are struck with absolute accuracy; I remember my own father refusing to teach me his trade for the same reason.

The world of Baltimore in the first half of the century is recreated by the film with an unforced but rich detail. The clothes and cars are just right, of course, but so are the values. We understand how for some of the brothers, especially Gabriel (Lou Jacobi), family traditions are sacred. He objects when one of his brothers moves to the suburbs after the war. He complains that he cannot find the suburbs, that it is too far a drive--but his real complaint is that the family is flying apart and losing its solidarity. This process is dramatized in the film's central scene, a Thanksgiving dinner where Jacobi and his wife arrive late and the family has already cut the turkey.

It is a trivial incident, perhaps, but it symbolizes a much larger event, the cutting of the family's close ties. Each generation is a little more alienated from the sense of community that the first generation brought over from Russia. Each new family drifts a little further from the center of the family circle. This is a process that may have something to do with the nature of American society. Europeans are vertically conformist; they want to do things as their ancestors did. Americans are horizontally conformist; we want to do things as our neighbors do. This process breaks down the richness of ethnic heritage and creates a bland Middle American who, in a way, is from nowhere--who was invented in TV commercials.

Television gets a lot of the blame from Levinson for the breakdown of the family. At first the whole family gathers around the first set they've seen, staring in fascinating at the test patterns. Later the big, loud family meals are replaced by smaller groups eating off of TV trays, looking at prime time.

Meanwhile, material success comes quickly to some of the Krichinskys. Issy and Jules (Kevin Pollak and Aidan Quinn), two cousins of the second generation, "Americanize" their surnames to Kirk and Kaye, and open a big appliance store. They advertise on TV, in hambone commercials that have the customers lined up around the block. They expand, and eventually take over a big warehouse, opening the first discount department store in Baltimore. Things are going well when two of their children--including a character probably meant to be Levinson himself--do something I will not reveal here, but which is told with such empathy, with such a memory for how young children do and remember things, that it becomes the other central pillar of the film.

In a way, the kids do what they do because of what they've seen on television. The result, indirectly, is that one of their fathers gets a job selling advertising time on TV. Television is a thread all through the movie. It's a socially divisive force, but it's also an entertainment, a hypnotic pastime, an occupation, an influence, a presence. Levinson seems to feel that TV is a disastrous invention that has cut our human society off from its roots. That may be true (although it will not, of course, prevent the eventual sale of this film to television).

"Avalon" is often a warm and funny film, but it is also a sad one, and the final sequence is heartbreaking. It shows the way in which our modern families, torn loose of their roots, have left old people alone and lonely--warehoused in retirement homes. The story of the movie is the story of how the warmth and closeness of an extended family is replaced by alienation and isolation. The title of the film comes from the name of the Baltimore neighborhood where the family first settled. In Celtic mythology, Avalon was an island of blessed souls, an earthly paradise somewhere in the Western seas. Who would think, sailing for it, that they would fall off the edge of the earth? 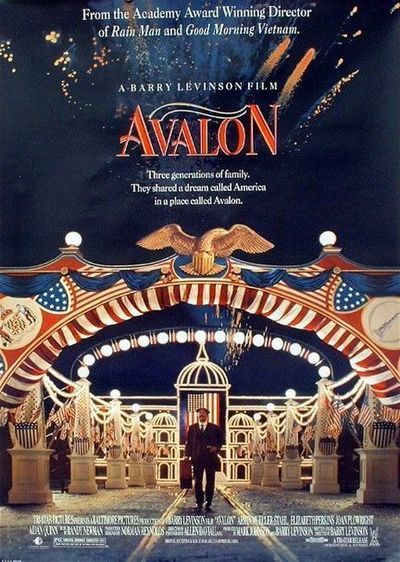