The term universal is used rather generously these days to define the overall strides of a cinematic story. But certain moments in writer/director Sadaf Foroughi’s “Ava,” a contemporary, gradually darkening coming-of-age tale of an Iranian teenage girl in Tehran, feel so familiar that universal is the only apt way to characterize them. In those loose and emotionally recognizable moments, you might even think you are watching a high-school film à la Amy Heckerling: Ava (terrifically played by Mahour Jabbari) and her girlfriends carelessly bicker about their lives, parental problems and romantic interests like teenagers habitually do regardless of the geography or politics they are surrounded by. But then Foroughi patiently (if not, aimlessly at times) drip-feeds the outside forces and introduces the strict codes and traditions the girls are up against with specificity. We understand in due course that their young and defiant selves might have managed to carve out spaces of daily camaraderie and sanity, but even the bravest of spirits, as “Ava” observes, can be broken down with constant beating.

While its title character begs to be built up further—at times, she seems frustratingly remote and broad despite Jabbari’s passionate performance—“Ava” deserves credit for not falling through the clichéd trappings of movies that pit tradition against modernity. Instead, Foroughi’s film refreshingly represents various points of view (mostly female) throughout, with an inquisitive and evidently informed perspective. Foroughi establishes Ava’s main conflict early on and seizes an instance of divergence between her and her strong-headed mother during their daily drive to school. Ava doesn’t jump out of the car with frustration like "Lady Bird"'s Christine (although her proceeding rebellious actions take a self-destructive turn); she just insists to be dropped a couple of blocks away from the gate. No wonder. Her overprotective mother Bahar (Bahar Noohian), a restless and generally exhausted doctor who works around the clock, wants to make sure that Ava steps inside the school without slacking off with her girlfriends in front of snooping onlookers. And this habitual quarrel proves to be the least of the never-ending mother-daughter battles in their upper-middle-class family. Bahar objects to her daughter’s musical aspirations (she plays the violin), keeps a tight lid on her friends and out-of-school activities with them, and in one scene, takes things to a heartbreaking, almost evil extreme by taking Ava to an ob-gyn for a virginity test after learning about her boyfriend and their (innocently spent) alone time.

This is when things take a rather serious turn in “Ava,” with its lead character acting up both against her mother and her school’s increasingly oppressive headmistress Ms. Dehkhoda (Leili Rashidi, suitably hair-rising). Briefly, Foroughi treats Ava’s father (Vahid Aghapour) as her only ally by presenting him as a sympathetic, fairly modern character. But she also makes it hard for us to blame Bahar completely in Ava’s spiraling troubles, despite Bahar’s relentless pestering of Ava and her surroundings. Also stuck in and brought up amid the same oppressive society, and frequently left alone to tend to Ava by her equally overworked husband, Bahar is a reflection of her society’s impossible demands of women—we halfway understand the source of her high-stakes severity even if we don’t agree with it. Foroughi approaches the rest of her side characters, including Ava’s best friend Melody and her divorced mother, comparably from various viewpoints. Hers isn’t necessarily a story of villains, but individuals systemically let down and misguided by villainous patriarchal patterns.

There is an air of unmistakable authenticity to “Ava,” further supported by Foroughi’s on-record comments about pulling from her own experiences of growing up in a repressive society. Still, her feature debut—shot with a painterly sensitivity by cinematographer Sina Kermanizadeh—leaves much to be desired, such as a tidier and emotionally more resonant final act. While “Ava” may not reach the rousing heights of the similarly-themed titles like “Wadjda” and “Mustang,” it certainly puts its sharp-eyed filmmaker Foroughi on the cinematic map. 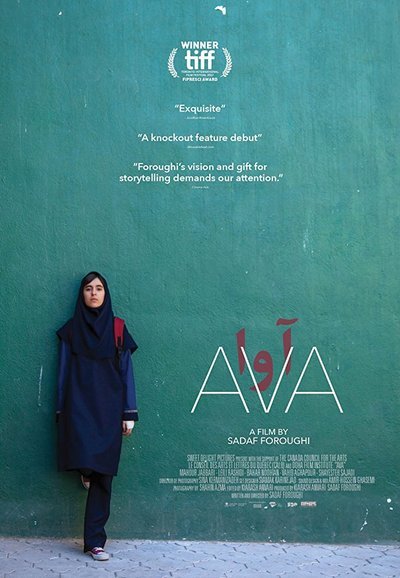