Every summer, after all those CG-crammed action extravaganzas are done huffing and puffing and blowing out our retinas and eardrums, Hollywood suddenly remembers that women go to the movies, too, and deigns to release a title designed for more discerning tastes. Something, crazily enough, that isn't spun from a comic book.

Meryl Streep—who, as "Modern Family"'s Cameron once so memorably observed, "could play Batman and be the right choice"—has been doing much of the heavy lifting in this area for a while what with such warm-weather winners as "The Devil Wears Prada," "Mamma Mia!," "Julie & Julia" and "Hope Springs."

But this year a farcical fantasy has been bestowed upon us fair ticket-buying maidens who are addicted to a certain lady author. A summary of "Austenland"'s premise alone could cause swooning in some circles, unless you wished it were called Austinland and that it showcased Lone Star hipsters.

Instead, it's a romantic lark that unfolds in a theme park at a sprawling English estate, a kind of "cosplay" universe not unlike Westworld but dedicated to bringing to life Jane Austen's early 19th-century novels, with all their societal strictures, gender imbalances and rules of courtship among Regency-period Brits intact.

Once in Austenland, female visitors pay for the privilege of acting as if they were modeled on the scribe's plucky heroines, complete with era-appropriate suitors—ranging from foppish to hunky—vying for their attention in between bouts of embroidery, hunting and croquet. The goal? To meet their own version of irascible Mr. Darcy, so indelibly—and moistly—embodied by Colin Firth in the 1995 "Pride and Prejudice" TV miniseries and as the modern-day model found in 2001's "Bridget Jones' Diary."

All this sounds eminently promising. But it would need a wordsmith as witty and wise as Emma Thompson, who won an Oscar for adapting the big-screen version of 1995's "Sense and Sensibility," to pull it off and do Austen herself justice.

That is not the case here. Filmmaker Jerusha Hess has had plenty of success concocting insular mini-worlds of loony characters alongside husband Jared in "Napoleon Dynamite" and "Nacho Libre." This time, however, she solos as a director—alongside Shannon Hale, co-screenwriter and creator of the same-titled 2007 novel, and Stephenie Meyer, producer and queen of the Twilight literary empire.

While the cast is gung-ho as well as tally-ho, the results are only intermittently amusing and feel half-finished—the way that "Saturday Night Live" skits often do, but at least those are blessedly only minutes long. Not helping matters is the inconsistent dialogue, often ad-libbed, that comes off as more desperate than laugh-evoking. And don't even mention the cheesy ancient pop songs—"Bette Davis Eyes," really?—used to pump up comic effect.

The prime offender among the actors is the usually welcome Jennifer Coolidge, who delivers another variation of a buxom middle-age ditz whose libido knows no bounds as a wealthy guest insistent on breaking decorum whenever it rears its head. My audience, packed as it was with members of an Austen appreciation society, practically shrieked "squee" in unison when the actress best known as Stifler's mom from the "American Pie" franchise showed up. But try as she might—so much so that it is impossible not to chuckle occasionally—Coolidge is mostly reduced to shouting inappropriate Anglo-isms, such as crying out, "The British are coming," atop a horse or mangling the phrase "right-o," and making goo-goo eyes at the actors playing the swains.

Perking up matters considerably, however, is the film's star, Keri Russell, bright, sparkling and instantly relatable as 30-ish singleton Jane Hayes, who would probably wrap her Austen-themed apartment in a Union Jack tea cozy if she could. With her love life a shambles because she is more attracted to her life-size cardboard replica of Firth's Darcy than any real male, Jane decides to live out her dream and invest all her savings in a trip to Austenland.

The use of Jane Seymour is emblematic of much that is wrong with "Austenland." She is perfectly suited for the imperious Mrs. Wattlesbrook, the proprietor of the resort who decides the storyline for each guest, and can easily amuse simply by hoisting a stuffed lamb while in period costume. But the movie never quite explains why she runs such a place and what she gets out of it, especially as she becomes hell-bent on humiliating Russell's Jane (who had the misfortune of buying a bargain package and suffers for it) at every turn. And while Seymour's mistress of the manor forbids any modern gadgets such as cell phones on the premises, somehow glue guns are OK during a bonnet-crafting session.

Matters look up when Jane—given the fictitious surname of "Erstwhile" during her stay, which is about as subtle as the movie gets—happens upon her potential Darcy (JJ Feild as Mr. Nobley, who benefits immeasurably from being allowed to play his role straight). Also a plus is scruffily handsome Bret McKenzie—the Kiwi funnyman of the folk duo Flight of the Conchords who won a 2011 Oscar for his song from "The Muppets"—as Martin, the estate's twinkly-eyed handyman who pitches forbidden woo with Jane.

Those who worship Austen in any form might get the most out of this uneven burlesque. Others who are less forgiving will feel let down—especially considering this is a rare movie made by women and for women. As a satirical romps go, the well-meaning "Austenland" is simply lacking both sense and sensibility.
Advertisement 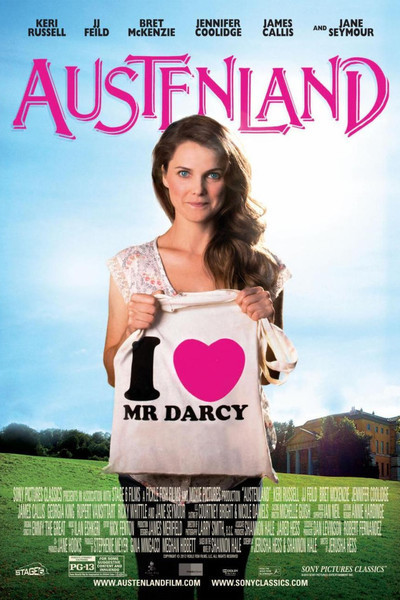