It is somewhat refreshing that "At Middleton", a middling romantic comedy set during a tour of a scenic college campus, focuses on a couple of adults at a crossroads in their lives rather than a pair of entitled adolescents pondering which prospective institute of higher education to attend.

What proves less than satisfying is how much energy director/co-writer Adam Rodgers expends to simply prove the mossy adage that opposites do indeed attract.

Like their characters, first-time co-stars Andy Garcia and Vera Farmiga at least have one commonality. Both broke out in gangster dramas: For him, 1990's "The Godfather Part III", and for her, 2006's "The Departed". As the gap between those years suggests, the male of this potential love-match equation is a tad old for the female half (Garcia is 57, Farmiga is 40). In this area, "At Middleton" faithfully upholds one of Hollywood's favorite double standards.

As for Garcia's George, a heart surgeon, and Farmiga's Edith, a retailer of children's furniture, both parents are accompanying their only offspring on a road-trip quest to decide their academic futures. And that is where the similarities end. Bow-tie enthusiast George is an uptight square who shuns taking risks. Unconventional Edith is a mouthy free spirit for whom rules are meant to be broken.

Of course, his happy-go-lucky son, Conrad (Spencer LoFranco), is maddeningly cavalier about their mission while her daughter, Audrey (Farmiga's look-alike teen sister Taissa), is a humorless perfectionist who leaves little to chance. After revealing that Audrey Hepburn inspired her child's name, Edith admits, "I should have named her Benito."

After Edith starts to annoy other visitors by peppering the overtly sincere student tour guide (who declares that his dual major of horticulture and music qualifies him as a "dingleberry"—and, no, that label isn't funny no matter how many times it is repeated) with questions about the rate of murders and rape at Middleton, the two parents decide to explore the environs on their own.

You know things are about to go middle-age crazy when Edith suggests to George that they "borrow" two abandoned bicycles they happen upon along the way. "This is fate," she says giddily. "This is theft," he says nervously. And off they go.

Somewhere between creating a disturbance at the library, climbing to the top of a bell tower where George panics over his fear of heights, performing a flirtatious duet of Chopsticks on a piano, disrupting a drama class before giving an impromptu master class in improv and getting stoned with a pre-med student and his girlfriend, these madcap gadabouts reveal to one another that they both are married. And not necessarily happily, especially now that their kids won't be around much longer to provide an emotional buffer against any marital strife.

It is hard to root for their possible infidelity, considering we barely know any details about George and Edith's personal situations, other than they are all too willing to abandon their children with barely a second thought and frolic about on their own.

Matters would grow more tiresome if not for two welcome if all too brief appearances by a couple of cool cats who act as surrogate parents. Former "Animal House" rowdy Peter Riegert does his best Wolfman Jack imitation as a DJ named Boneyard Sims who initiates Conrad into the ways of collegiate radio hosting. A handsomely wizened Tom Skerritt gets to put presumptuous Audrey in her place as the esteemed professor of linguistics that she has idolized since the ninth grade.

"At Middleton" is the just the sort of trite if inoffensive diversion that barely tiptoes into theaters before landing in the cable and video-on-demand listings. And Garcia and Farmiga, as good as they can be in the right roles, aren't doing themselves or their careers any favors with this sort of C-level effort.

At least the ending is brazen enough not to conclude in a tidy fashion. But watching George and Edith cavort in slo-mo while being drenched in a campus fountain is antithesis of enjoying "Annie Hall" and Alvy Singer as those classic polar opposites engage in battle against a runaway lobster. One scene has comic snap. The other is merely soggy. 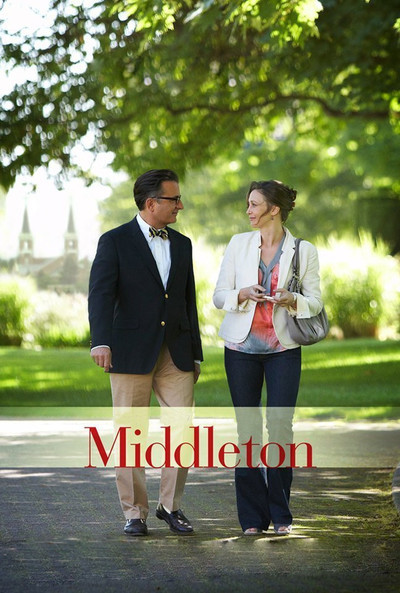