It clocks in at under 90 minutes, but at times I felt it was taking me 80 days to get to the end of this latest adaptation of Jules Verne’s story of a race around the globe. His novel has been adapted more than a dozen times, including Mike Todd’s Best Picture Oscar winner, the Razzie-nominated version with Steve Coogan and Jackie Chan, and a 2021 television series starring David Tennant.

This French/Belgian animated re-telling has animal characters once again trying to win a bet by circumnavigating the planet in just 80 days, but other than that there is very little connection to Verne’s story. And thus, as I watched, I tried to amuse myself, since the movie was failing in that task, by asking myself a series of questions: Why take the premise and characters from this story and jettison the best parts, including one of the all-time best twist endings, substituting new and very dull details? Why make a movie about a trip around the world and spend most of it in nondescript fictional locations? Why is the journey of a note in a bottle shown with more wit and visual flair than the journey of the characters trying to win the bet? And most of all, why is this movie so screechy?

In the book, it is the wealthy and very precise Englishman Philéas Fogg who makes the bet that he can circle the world in 80 days. He is accompanied by his just-hired French valet, named Passepartout (in French, the word means “go everywhere,” related to “passport”). In this film, Philéas (Rob Tinkler) is a frog (it sounds like he calls himself Philéas Frog at one point, ha ha) who is a surfer and a pickpocket and con artist. Passepartout (Cory Doran) is a nerdy, bespectacled little marmoset who dreams of being a world explorer like his hero, Juan Frog de Leon. His shrieking, overprotective mother (Shoshana Sperling) makes him wear his yellow rain slicker even when it is not raining and keeps reminding him he must not do anything unless fully prepared. And as far as she is concerned, no preparation is enough. She reminds him that they moved to a seaside town to get away from the dangers of the jungle: “No adventure here.”

Not unless you consider it an adventure to be bullied by the local population, who happen to be shrimp, and who like to make bets on who can make Passepartout cry first. This may be why Passepartout has anxiety dreams, like being sent off on a grand adventure without his pants.

Philéas arrives with a thumping rap song via his surfboard, which is called “Boardy,” because this movie is definitely not trying to be clever. He picks some pockets, scams some money, and makes the bet with the meanie shrimp guys. There’s another reason for leaving town quickly. The bank has been robbed and local sheriff (Heather Bambrick as Fix) thinks Philéas is the culprit.

Soon, Philéas and Passepartout are on their way. Where to, you might ask? Well, you might think a movie about going around the world in 80 days would have some colorful stops in fascinating real locations, but not really. Our intrepid travelers, when they’re not tiresomely developing respect for each other’s skills, spend much of their time in generic settings: desert, jungle. They save and are saved by a smart, beautiful frog princess (Katie Griffin) who happens to be an aviator. And they run into none other than Juan Frog de Leon (Juan Chioran).

Instead of the wit, charm, and humor the story should inspire, the movie settles for dumb jokes (“Kiss my ax!” yells Passepartout) and dumber insults (“How much does a princess know about science-y stuff?”) Yelling and pratfalls do not disguise the lack of vitality or originality. 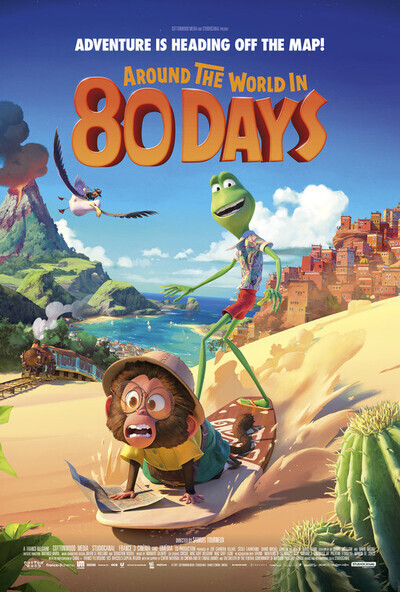 Writer (adapted from the novel)