“Arkansas” is the kind of rural neo-noir that tries to eulogize the Real America, an oft-mythologized sub-continent populated by soulful, wisecracking rednecks whose relationships with women, drugs, and colored folks is more complicated than you might think. To enjoy “Arkansas,” which was adapted from John Brandon’s novel by Andrew Boonkrong and director Clark Duke, you have to be interested in—or at least not allergic—to the idea of watching good ol’ boys pity themselves while also making themselves look savvier and more noble than the rest of the hoi polloi.

If you can either overlook or embrace that kind of self-pitying/valorizing worldview, you might enjoy the narrative convolutions and tough talk in “Arkansas,” which is about two small-time drug dealers (Duke and Liam Hemsworth) who get sucked into a vast criminal conspiracy. “Arkansas” doesn’t usually look like much (lots of music video lighting), and is often over-edited, so it usually feels like a season’s-worth of Prestige TV packed into a two-hour film. But the road to Brandon’s downer ending—which can be spotted from a country mile away, even if you haven’t read his book—is full of incidental pleasures.

The plot of “Arkansas” is intricate, though not really complicated: aloof drug dealer Kyle (Hemsworth) and his cocky business associate Swin (Duke) stumble into a bad scene after a routine drug run goes bad, forcing them to work for Bright (John Malkovich), a proudly malicious drug kingpin and full-time park ranger. Ranger Bright mercilessly exploits Kyle and Swin because he’s somewhat higher-ranking than them in the local gangster food chain, which is overseen by the mysterious crime boss Frog (Vince Vaughn) and his equally mysterious drug supplier “Her” (Vivica A. Fox). Kyle and Swin are mostly ok with being exploited for a while, until Swin starts dating Johanna (Eden Brolin), a local girl who is an earnest Christian (ie: she prays), but is also predictably smarter than her association with Swin might suggest.

After that, “Arkansas” is only ostensibly complicated by a series of flashbacks and tangential sub-plots that give viewers a little more background info about Frog and his business associates, all of whom either hustle and/or are hustled by other drug dealers. Most of Brandon, Boonkrong, and Duke’s characters indicate their problems by shrugging them off with clipped and sometimes dryly funny dialogue, like when Ranger Bright is tortured with a clothes hangar and he growls, “I’ve never been tortured before.” That kind of gallow’s humor defines the surface tone of “Arkansas,” which often feels like a riff on “Breaking Bad,” only now it’s more about how sad it is to be poor white trash. There’s also a smirking, often overweening quality to Boonkrong and Duke’s dialogue, probably because it seems like they reverently lifted whole chunks of it from Brandon’s book. Which is only annoying because there often seems to be more to the movie’s characters than a few good one-liners and a lot of bad luck.

So it’s not really surprising that some of the best and worst parts of “Arkansas” are the ones where Frog learns how to hustle lest he be hustled. Vaughn and his co-star Michael K. Williams, who plays a characteristically seedy but charming character named “Almond,” sell their scenes because they’re both so good at looking sad and cool at the same time. But there’s an unearned smarminess to this part of the movie because Frog and Almond are only as interesting as their monotonous screw-or-screw-be-screwed behavior. There’s also lot of willfully unexamined prejudices sitting on the movie’s placid surface, like when Frog gets jumped by a group of tough customers outside of a bar with a Confederate flag pinned to its side.

It’s often hard to know why we’re supposed to like Frog, or at least find to him to be a charming scumbag. He keeps a revolver in his desk drawer right next to two gold-foil condoms. He frequents a prostitute at a motel right by a conspicuously foregrounded Waffle House. And when she tells him “[I] love you, baby,” he quietly snarls back “Sure ya do,” a line that is predictably repeated later on by another character in a somewhat ironic new context. “Arkansas” is just that kind of movie, because its creators are seemingly as often in love with their sad-sack outlaw rebels as their self-pitying fatalism. In the movie’s press notes, Duke says that “this is (my personal version of) the real South,” which he says is “heartbreaking and hilarious, poetic without being sentimental, mannered but brutally honest.” I wish I’d seen that movie, and hope Duke gets to make it some day. 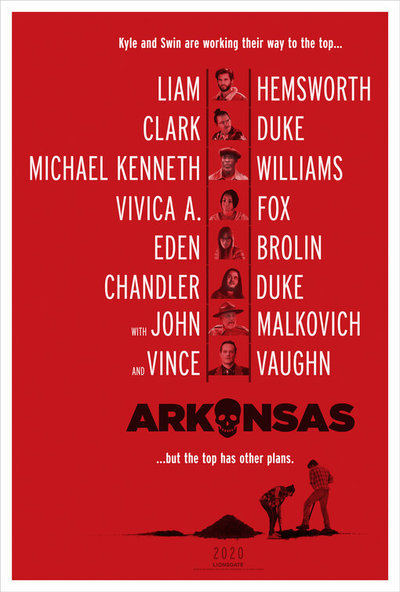 Vivica A. Fox as Her