For movies meant to put a character through a gauntlet of death and hopelessness, survival stories are abundant with dramatic potential: here’s someone just like you, he's stranded in the middle of nowhere, now let’s watch him try not to die. It’s almost more exciting to think of the writers figuring out such a precise situation than the unfortunate characters themselves. But the best ones (like Robert Redford’s yachting adventure gone wrong “All is Lost”) have a poetry to their physical tales of hope, and the worst play out like a survivor’s manual of what to do and not do, or an endurance test. “Arctic,” directed by newcomer Joe Penna, is stuck somewhere in the middle of those qualifications, its drama largely subsisting on the on-screen muscle of Mads Mikkelsen.

Things start off relatively manageable for Mikkelsen’s Overgård, all things considered. Yes, his plane has crashed in the middle of an Arctic nowhere, but he has a pulley system into a water hole that’s gotten him a few fishes he can save for later meals, and a radio system that he cranks with hopes of catching a signal. He is alone, but he knows how to read a map, and has a watch alarm that keeps him regimented. He seems confident and weirdly prepared for this crisis, two key creative choices from Penna and Ryan Morrison’s script that take away the vital nervousness of watching him figure this all out.

So when a helicopter attempts early on to rescue him but crashes, it comes off as bittersweet, and less of a traumatizing lost chance at surviving. Pros: he gets a sled, some Ramen, and some other gear out of the crash. Cons: Overgård now has to care for the one person who survived the crash, a woman in a coma. He silently vows to take care of her, in a few warming passages for a movie that makes you very aware of the temperature of your toes. But then “Arctic” finally gets to its major event: he’s going to drag her on the sled and trudge with limited supplies through the deadly conditions, his goal a seasonal station that the map tells him is a few days’ journey away.

But even with its bouts of good and very bad luck, once “Arctic” endeavors on its suicide mission it feels alarmingly straight-forward. The film’s testing of Overgård’s strength goes from polarizing contrivance to heavy-handed metaphor for his inner resilience. Can one drag a body on a sled for numerous days, sometimes on a steep incline, with hardly any food in one’s stomach and frost bite? How much does a desperate will to live lead to adrenaline? Those are the kinds of questions that distracts from the pain and spirit “Arctic” was clearly inspired by, distancing the viewer from its visceral nature as it beats on Overgård’s body this side of Alejandro González Iñárritu’s “The Revenant.” It doesn’t help that the movie wears out its most impactful visual note, a lonely white canvas that sometimes can only colored by two bodies and a sled to show any semblance of life.

As the flagging eyes and brawny fighter of this endeavor, Mikkelsen is a vivid casting pick. But it’s a shame his role doesn’t feel more spiritual, as this crises takes place in a land that even God’s silence seems to have forgotten, and as “Arctic” does have moments in which it flexes cheesy irony on his life-and-death decisions. The movie is instead most concerned with the empty spectacle of watching his body overcome nature’s cruelest obstacles, hollowing him out in its most hope-deficient moments. And though Overgård spends a lot of time alone with his thoughts, “Arctic” lacks what makes for the best movies of its ilk: it does not inspire much imagination concerning what our hero might do first if he does get back home. 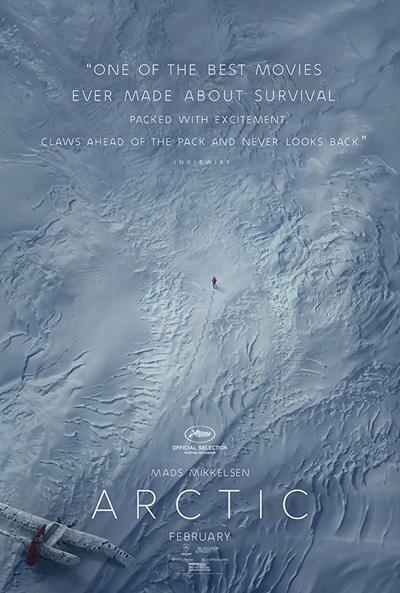