French director Leos Carax was once asked if his name was "real" or "assumed." He answered, "It's a real assumed name." This was not a wisecrack. Ever since he made his directorial debut at the age of 24, he has played around with the real and the assumed, the truth and the lie. In many cases, he makes no distinction between these so-called opposites. Theatre and acting could be seen as a "lie"—they deal in made-up worlds, with people pretending to be other people—but theatre is also the place where the truth can be told. Maybe it's the only place. The truth isn't pretty. The truth hurts. The truth is sometimes silly and unfair. Real life often rejects this. Theatre accepts it. So does Carax. "Annette," his sixth full-length film, is an audacious exploration of these ideas. Most obviously, it is an unabashed rock opera. The only sustained dialogue comes from a man doing a stand-up act on a stage. "Annette" is an exhilarating and exuberant experience.

With a gigantic score by the American pop duo Sparks (brothers Ron and Russell Mael), "Annette" is not just a musical, it is also a soapy melodrama incorporating elements of the supernatural (a common theme in Carax's films). "Annette" is filled with dark and sometimes self-destructive energy, where emotions are barely manageable and can only be expressed through song. This is the conceit that is so often not properly addressed in the modern movie musical. It feels artificial to start singing in the middle of a scene. It is artificial. Carax, though, is comfortable in the fluidity of the "real" and the "assumed." He doesn't worry about what is or is not artificial. This sensibility has been passed on to his talented cast, all of whom accept the conceit of the musical, and have no problem meeting its demands.

Adam Driver plays Henry McHenry, a famous standup comedian with a cult following. His "act" is more like a performance art piece, seething with hostility, rage, and anti-social tendencies. Driver, in a hooded bathrobe, stalks around, sometimes whipping the microphone around on its cord, as his audience chants in unison. Occasionally, four backup singers appear in the background, providing musical accompaniment and sometimes acting as a Greek chorus, looking on in horror at what is unfolding. Henry's act may call to mind Andrew Dice Clay in some respects, but it's also reminiscent (in structure, if not in feel) of what Steve Martin was doing in his 1970s heyday. Martin created a persona—the white suit, the banjo, the arrow through the head—and the persona was what people came to see. Whether or not Henry's onstage persona is representative of his true self is one of the tensions in "Annette." He's asked "Why did you become a comedian?" He answers, "To disarm people. It's the only way I know to tell the truth."

Henry has fallen in love with a famous soprano named Ann Defrasnoux (Marion Cotillard), known for her spectacular death-scene arias. The tabloid press has gone berserk over this mismatched "It Couple," and the film is punctuated by "Entertainment Tonight"-style breaks, where the relationship is discussed obsessively. After one of Ann's concerts, Henry pulls up to the stage door on his motorcycle, and the two roar off into the night, careening home through the darkness. Their love theme, repeated obsessively, has the uber-obvious title "We Love Each Other So Much," which they sing through different scenes, separately and together, walking in the fields hand in hand, or having passionate sex (kudos to both actors for making this work). But nothing this pure, this beautiful, can last. Henry's comedy act runs on loathing, of himself and his audience, and that self-loathing comes from a real place. How could someone as beautiful as Ann love him? He's jealous of one of Ann's ex-es (Simon Helberg), a conductor who arranges all her music. Meanwhile, Ann has hallucinations of Henry being taken down by a #MeToo-like situation (with each "accuser" singing her version of events on television). She thinks she knows him. Can we ever really know another person?

Henry is not "canceled" because of accusations from women. In a spectacular act of self-destruction, Henry torches his own career. He cancels himself. As his star falls, Ann's star rises. The tabloid press seethes around them, salivating at the trainwreck. There are elements here of "A Star is Born," or "New York, New York," two movie musicals where creative people struggle to maintain their equilibrium when one partner is less successful than the other. In the midst of all this turmoil, Henry and Ann have a baby. The less said about that the better.

Carax has only made a handful of films in 37 years. He started strong, with "Boy Meets Girl" in 1984, starring Mireille Perrier and Denis Levant (whom he would work with again and again). In 1986 came the masterpiece "Mauvais Sang," directed at the astonishingly young age of 26. "Mauvais Sang" starred Juliette Binoche and Levant, again, and it holds up as one of the great accomplishments in cinema. Carax may have been 26, but he was already fully formed as an artist. His third film, the misbegotten "The Lovers on the Bridge" took three years to complete, and was such an expensive bomb—like France's "Ishtar"—it would be nearly ten years before Carax made another film. (Expensive flop or no, "Lovers on the Bridge" deserves to be re-discovered.) In 1999 came "Pola X," with Catherine Deneuve, featuring a score by the avant-garde singer-songwriter Scott Walker. (Music has always played a vital role in Carax's films and many of his most famous sequences—like in "Mauvais Sang" where Levant, thrilled at his first sensation of love, runs and cartwheels down a dark street to the accompaniment of David Bowie's "Modern Love," a scene Noah Baumbach lifted wholesale for "Frances Ha"). In 2012, came "Holy Motors," starring Levant again, as a man traveling the streets of Paris in a white stretch limo, transforming himself physically for different "appointments." "Holy Motors" is Carax's most frankly theatrical: it is about the act of creation, about acting itself. The film starts with a shot of an audience sitting in a dark theatre, waiting silently for the show to start.

In "Annette," Carax admits the artificiality from the start. The film opens with musicians and singers gathering in a recording studio, as technicians tweak levers in the booth. The band begins to perform the opening number, "So May We Start," and eventually, the number breaks its own seams when the band, the singers, the technicians, all, stand up and leave the studio, still singing as they walk through the streets, gathering people in their wake, the sound getting bigger and bigger. (This calls to mind the accordion "entracte" in "Holy Motors"). “So May We Start” acts like one of those Shakespearean opening or closing speeches, where a character addresses the audience directly about what they are about to see, or, at the end, asks for applause (like Puck's "Give me your hands, if we be friends" at the end of Midsummer Night's Dream.) "So May We Start" sets the terms of "Annette"'s operating principles. It is artificial, but no less real because of it. The same is true when it comes to Carax's stunning use of rear-projection (in one scene in particular). It's "fake," but there's something about it that is more real than documentary-style reality. Nothing is fake when you're in the act of creation.

None of this would work without Adam Driver and Marion Cotillard's impassioned bold performances, Driver's in particular. Driver broods and agonizes like a gallumphing giant, too big and clumsy for any small space anyone tries to put him in. Love sets Henry free but love also boxes him in. It's a contradiction Henry cannot manage. He will have to torch it and he will have no one but himself to blame. There's always a self-destructive streak in Carax's fictional worlds, especially when it comes to love. Love is redemptive (like the skydiving scene in "Mauvais Sang") but love is also a torment. The sweetness has a bitter aftertaste.

The final scene of King Vidor's 1928 masterpiece "The Crowd" takes place in a movie theatre, where a huge audience rocks with laughter. The camera sweeps over the crowd, faster and faster, pulling farther and farther back, until the crowd becomes abstract, and the laughter almost grotesque from the God's-eye view. Carax has incorporated that scene before in his films, and it shows up here too. It's a potent symbol for Carax and a perfect encapsulation of his interest in the tensions between audience and artist, between the artist and the world, of humanity's need for escape, and how imperfect escape can be. The truth is sometimes unbearable. All you can do is laugh.

In a 2012 interview with Indiewire, Carax mused, "I hope to make a film one day that will be music. I wanted life in music." And so "Annette" feels like a culmination, it feels inevitable. This is where Carax has wanted to go all along.

"Annette" will be available in select theaters on August 6, and on Amazon Prime on August 20. 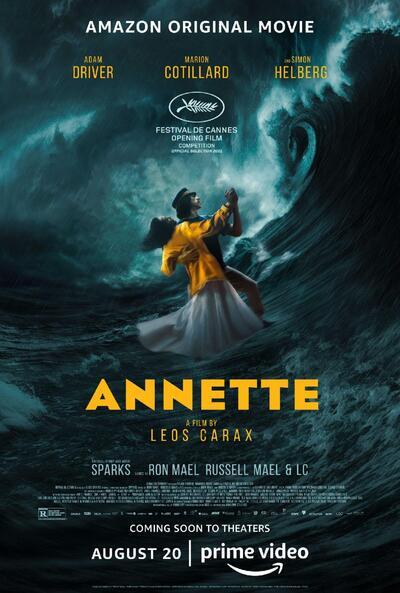 Rated R for sexual content including some nudity, and for language.

Simon Helberg as The Conductor